HOW TO SERVICE YOU SKIS OR SNOWBOARD 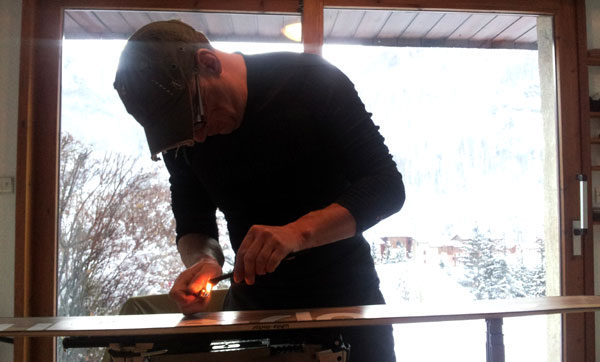 We’ve all been there at some point. You’re flying down the hill, happy as a pig in powder when suddenly you hear it, the horrible sound of your base on a rock.

Time for some DIY repairs. Yes, you can service your own kit when you know how. And have an iron. Oli Walker, ski technician, waxes lyrical.

You know instantly when you’ve hit a shark, a little bit of rock delicately poking through the snow, sitting in wait like a silent assassin, patiently hunting its prey, preparing to strike out at any oncoming victims. Rocks eat boards and skis for breakfast and there’s not a lot you can do about it.

Inevitably this means a trip to the local shop to repair your downed comrade. You hold it tightly as you march it to the operating theatre. The professional ensures that everything will be ok – it’s not a deep wound after all, more of a glancing blow and it’ll be fixed up by 4pm. He’ll live, soldier.

Servicing your gear is pretty important but a lot of people turn a blind eye to it. Some p-tex, wax, scraper and an edge tuner is, generally, all you need. You can grab all the gear relatively cheaply in a local ski/board shop and the iron is definitely an ebay job.

In terms of wax, we’ve found the best one to use is Butta. 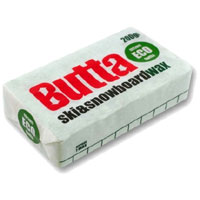 These boys are taking the winter sport world by storm with their eco-friendly waxes. Devoid of any flouro-carbons, it was dreamt up by co-owner Jim Stewart when he realised the damage other waxes were doing to his body working in a closed environment. Six months later the Butta Original recipe was born. The rest, as they say, is history.

I’m going to show you just how to do all this in a pretty easy guide. If you want to get the most out of your board or skis buy a few bits of equipment and service your gear regularly. It’s silly not to.

First off you need to clean your bases. A bit of wax remover rubbed over it will take off old wax and provide a better surface for p-tex to grip on to. Simple. Don’t go over the top with this stuff, it doesn’t require a lot. 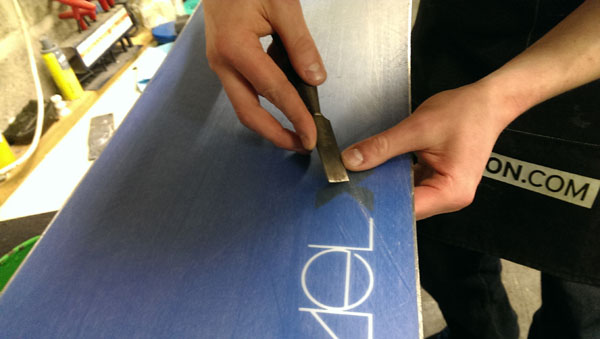 Use the blade/brush to take out any bit of rock or material from the gouge. Don’t want that crap staying in there for a party.

Grab yourself a scraper and using the end of it, hold it at about 45 degrees and carefully scrape any excess p-tex until it’s nice and flush with the rest of the base. Use a soft brush (or a Scotch Brite pad) and rub the base tip to tail to clean up the mess you’ve inevitably created.

Your filling is complete. Give your board/skis a reassuring pat on the back and tell it everything will be alright.

N.B.  If you can see wood through the bottom of the gouge, you’ve done a really rad job at making a complete balls up on the mountain. After taking a long hard look at yourself and examining your life choices, take it to a pro who will apply an apoxy resin to it properly before you fill it with p-tex (p-tex won’t stick to the wood).

This bit is easy. Use the cork pad and rub it from tip to tail along the edges to remove any burrs. Then grab your edge tuner.

Set it to the desired angle (usually about 1-2 degrees max) and, starting at the tip, slide it down the edge in one even stroke. Do this a few times, constantly checking the edges until they feel sharp enough. 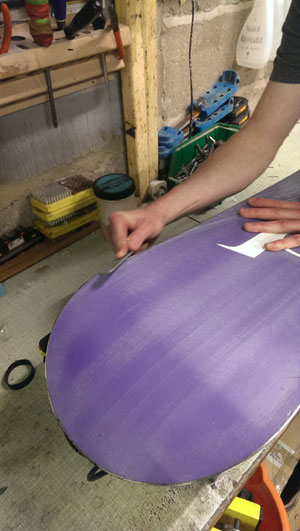 For a snowboard, you may want to detune your edges as well. Where the board starts to turn inwards towards the tip and tail, grab yourself a file, place it diagonally across the edge and file it down so it becomes rounded. This means you’re less likely to catch an edge (unless you are just really bad at snowboarding in which case, try skiing instead).

Now your base is repaired and your edges sharpened, it’s time to do some ironing.

You can get different waxes. Some are rub on and some need ironing on. A hot wax is always best so grab yourself a bar and you’re ready to go.

Get your waxing iron on a medium temperature. Hold the tip of the iron just above the base and melt the wax against the iron so it drips down like a beautiful waterfall of liquid sexiness. Try to get a fairly even coverage and focus a decent amount near the edges.

DO NOT let the iron smoke. If it starts to smoke, it is too hot.

DO NOT hold the iron against one part of the base for more than a second. Keep that bad boy moving.

Now the fun part. Turn your iron the right way up and iron away like you would a clean crisp shirt. Keep the iron moving and don't stop until the wax has been spread EVENLY across the whole base (tip and tail are not so important but do it if you want to). 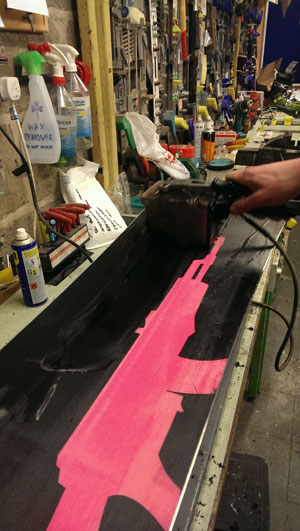 Put a pizza in the oven, chuck Jeremy Kyle on and contemplate some of your lousy life choices for about 30 minutes. This gives the wax a chance to soak into a sintered based. Dreamy.

When the wax is set, it’ll leave a lot of excess on the base so now it’s time to scrape it off. Grab a sharp scraper and, starting at the tip, scrap down the base and watch as the excess wax falls off. Keep going until the whole base is vacant of the stuff.

Finally, fetch a brush and rub the whole base down so it looks nice and smooth. This puts in microscopic channels in the base to reduce suction and stickiness when riding.  Give it a final go over with a cloth and your stick is ready to go.

It really is easy once you get going. It’ll allow you to slide effortlessly across the flat, turn on a sixpence and give your board or skis an extra few years of use. Silly not to, really.