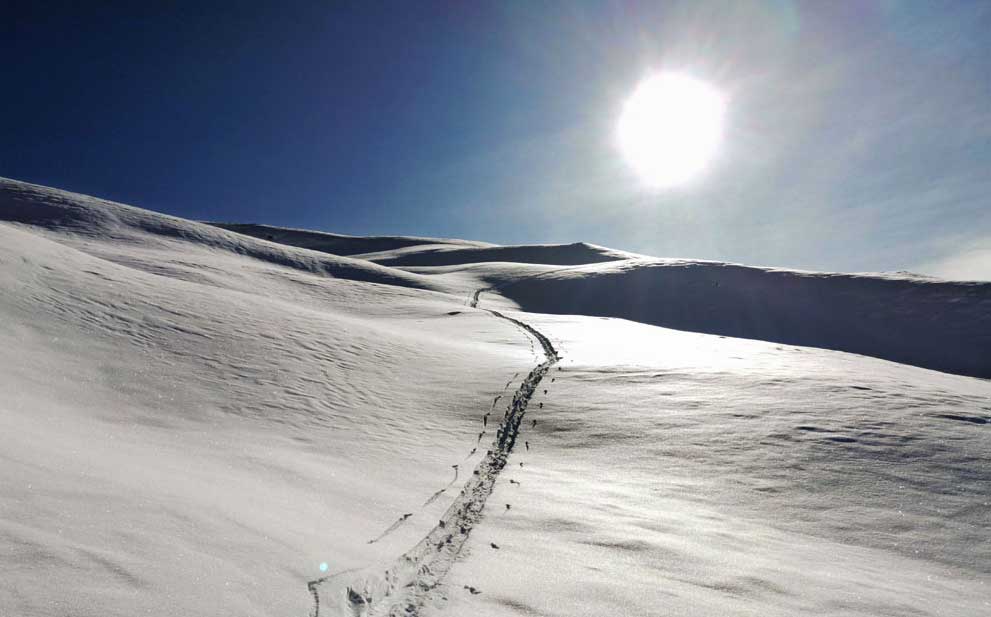 It hadn't snowed for nearly a week, the sun had melted snow cover below 2000m, wind had blown and the world and his ski touring wife had been out for pre-season trips up the hill. So what were the chances of scoring perfect untracked powder, yesterday, unless from a heli?

The day before we took the dogs for a walk, also an excuse for a reccy to see what the snow was like in the Vallee des Fonts. As the snow had receded back up the hill since the snowfall the week before, we were able to drive all the way along the valley to Les Fonts. There was definitely snow on the impressive face ahead but we noticed that it was pretty scoured by wind and trashed by kiters. Meanwhile, the Jack Russells were haring around playing, sending up clouds of fine dry snow. Yes, champagne powder.

Driving back, Gav stopped to inspect the area we usually climb known fondly as Teletubby Land because of its rolling contours. Through the binoculars he saw smooth snow-covered slopes seemingly untouched by wind or kiters. So, with the sun forecast all the next day, the plan was to do Teletubby Land, which has the added bonus of being mostly grassy rolling contours ie fewer rocks to trip you up when the snow cover is patchy. 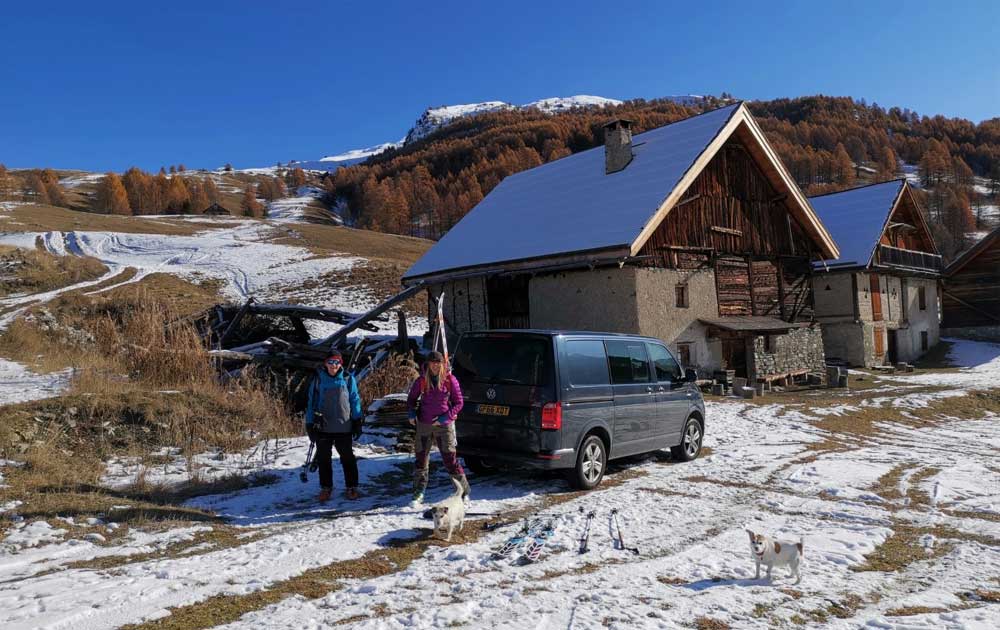 We picked Adrian up at 10am and drove all the way to the bottom of the climb at Le Bourget (usually we have to stop 2-3km away and need to skate/ski up the track). It was debatable whether to bootpack or skin up the barely-covered grass but in the end Adrian and I bootpacked around 100m while Gav skinned.

The next 600m were pretty smooth going with one skinning track to follow, so easier for Gav not breaking track and better for the Jack Russells going up behind. We transitioned at 2,600m. The first turns down were sublime in the powder, except I discovered that my bindings were loose because I'd forgotten lending them to Yvonne in the spring, who has slightly bigger ski boots than me. So, fortunate that the snow was so light that I didn't fall - and Gav had his multi-tool handy. 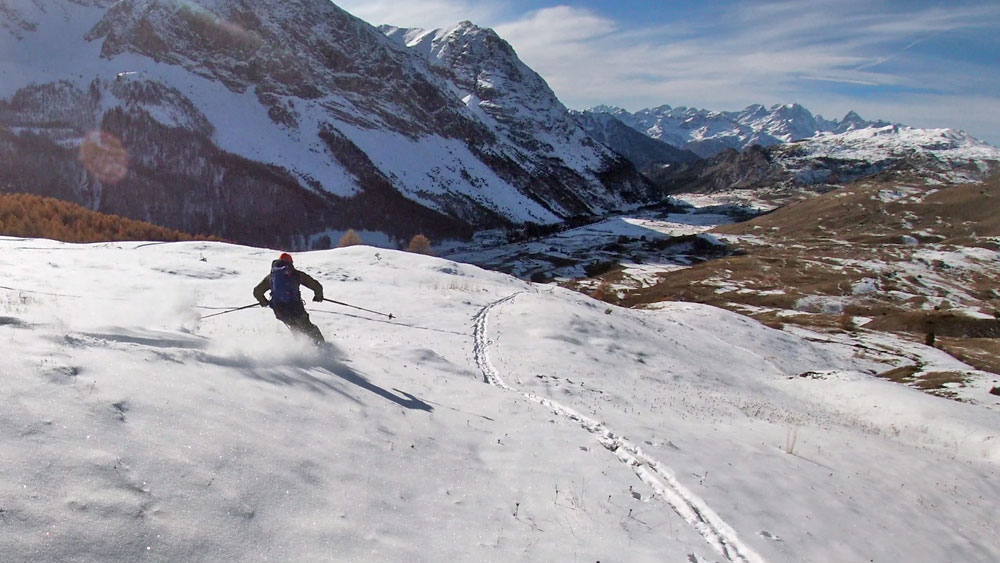 There was no one else on the hill, coming up or down. We took our own lines skiing the open terrain and gullies where there were only a handful of other tracks, with the dogs chasing behind. And the snow was light cold pow all the way, which must have been because it has been regularly freezing temperatures, pretty chilly for early November. We made endless powder turns until it started to get sketchy with the tall, scrubby grass showing through, which meant hopping across the snowy patches. And, because of the lack of rocks, the skis were remarkably unscratched especially Gav's who managed to grass/snow ski all the way back to the van. 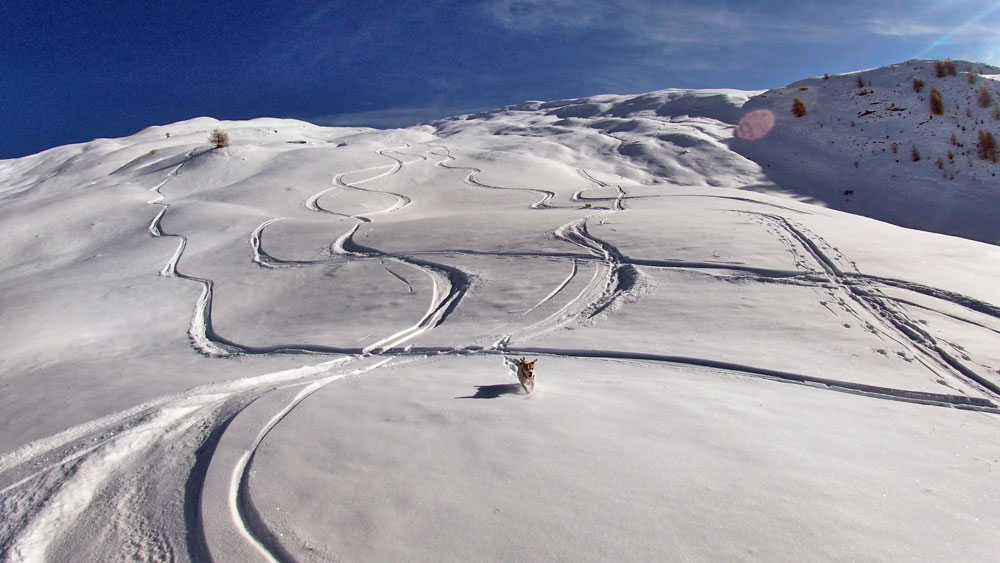 Today it's snowing, the Jacks are snoring and who knows what the next days will bring - and it's only November.