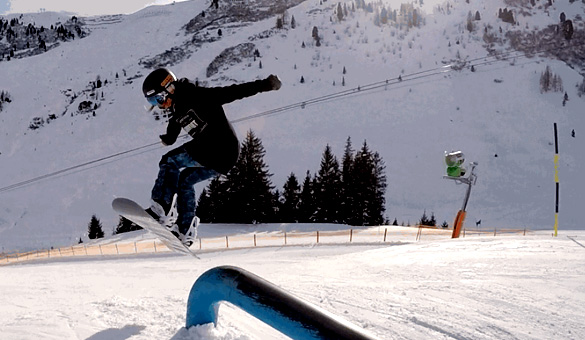 Ready to go up a level with freestyle tricks? If you're in the park and doing rails then now's the time to prepare for landings. Cool landings.

Follow the lead of our snowboard contributor, Faye Young, who demonstrates how to do a 180 and 360 off a rail and gives a step by step guide. Then, when you've mastered it, you can consider yourself a member of the 360 club.

For this lesson we are taking things up a level. If you are confident in the park and can already hit side-on rails then this is perfect for you. Landing a 360 out of a rail is one of the coolest tricks you can do. It's almost as if there is a 'club' that you become part of when you master the trick. It's good to learn because once you master the frontside spins you can move onto the backside spins and, if you're feeling brave, you could even learn the switch variations too.

If you feel confident doing 50-50s onto side-on rails then learning to 180 out is the next trick for you to try. You will probably find you already have a preference to which way to spin (either backside or frontside) so start with your favourite one as you will be familiar with the rotation. Practise does make perfect. The more you try the easier it gets. Ask a friend to film your attempts so you can check that you are doing everything correctly. Sometimes it helps to watch your tricks back because even though it might feel right it might not look good!

So this trick is one you will be able to learn if you are already familiar with hitting side-on rails and are able to do a 180 and 360 on a jump. This requires being able to ollie from the side onto a rail as opposed to just riding straight onto it without jumping. If you can find a donkey rail like the one I'm hitting then you will find this trick a lot easier but it is possible on a standard down rail, too.

You can start by learning how to 50-50 frontside 180 out first to get used to spinning out of the rail. To do a 180 out it's important that you get onto the rail nice and solidly. If you are a bit wobbly or off to one side, it's going to make it really hard to land a clean spin out of the end. SO approach the rail with a bit of speed and ollie nicely on it.

You need to be patient and make sure you have made it to the end of the rail before you throw the spin. Once you feel comfortable you want to slightly wind your arms back as you would to do a 180 on a jump so that when you reach the end of the rail you can POP nicely and bring your arms around to help you spin 180 degrees. Bring your knees up when you are in the air to keep it looking stylish and try to land with a flat base. You will be riding away switch so it's important to bend your knees and try not to revert back to regular straight away

If you manage to land your 180s out of the rail without any problems then you can try for the 360.

The start of the trick is the same as with the 180 - ollie on nicely and make sure you are in the middle of the rail and not wobbling about. Again you need to be patient and not do the trick too early. Wait for the end of the rail. This time you want to get your body into a more wound up position for the 360 out. Bring your arms back a little more than you would for 180 so that you can throw the spin harder. Donkey rails give you a nice 'kick' to help with the spin so if you are on a flat rail you will need to pop more.

When you are ready to spin out, make sure you POP, throw your arms around from behind you to in front and TURN YOUR HEAD. This is really important because it helps you bring the spin all the way around. If you keep looking forwards it's going to be really hard to do a full 360. So as you throw it look back up the slope and follow it round until you spot your landing. Bring you knees up at the same time to avoid looking like a pencil and aim to land on your toe edge as this will lock the trick nicely.

Then flatten out your board to ride away smoothly. Don't be annoyed if you don't get it first time, it's a hard trick to learn but if you practise 180s out loads then taking the next step to a 360 will be a lot easier as you get comfortable with the timings and learn how to throw the spin at the right time.