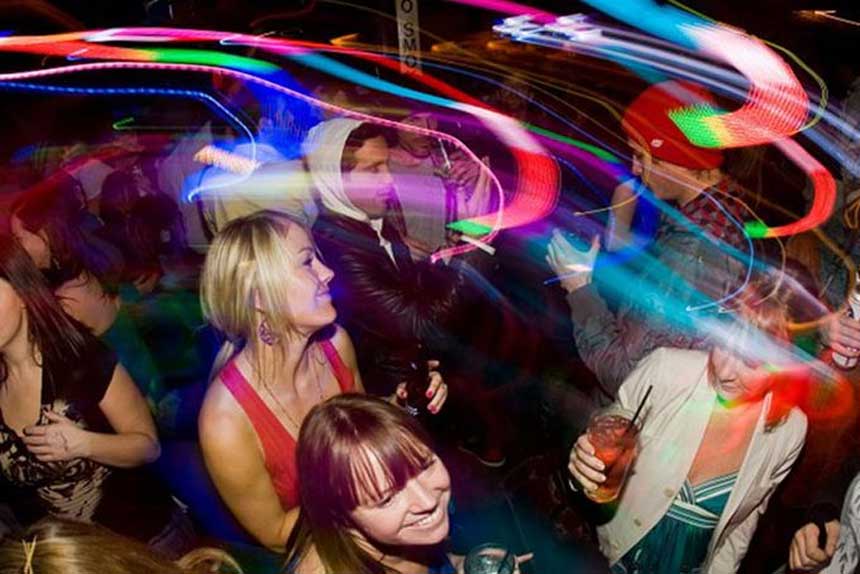 A Hard Core Week of Apres in Morzine

After surviving the powder bowls of Tignes and the glaciers of Saas Fee, Chris headed to the Portes du Soleil for the biggest challenge of the season, a week's skiing - and drinking - with his Morzine Crew

The week in Morzine would involve very little actual skiing followed by a mammoth amount of après skiing - if drinking and eating from 2pm to 2am can still be called après. The challenge was to avoid being abducted by the most malevolent of the skiing demons – the Après Aliens.

Not long after the wheels touched the runway at Geneva, I got the text – 'Meet Vaffieu 2pm'. The typical Savoyard mountain restaurant (below) at the top of the Pleney nursery slopes is famous for its tartiflette and infamous for its flirty tarts.

I thought I would be safe. This was January, not March, so there would be relatively few cougar parties lunching up the mountain. However, a couple of hours and a couple of pichet of vin rouge later, the rock music started, the table next door unpacked their inflatable air-guitars and the week long party started. 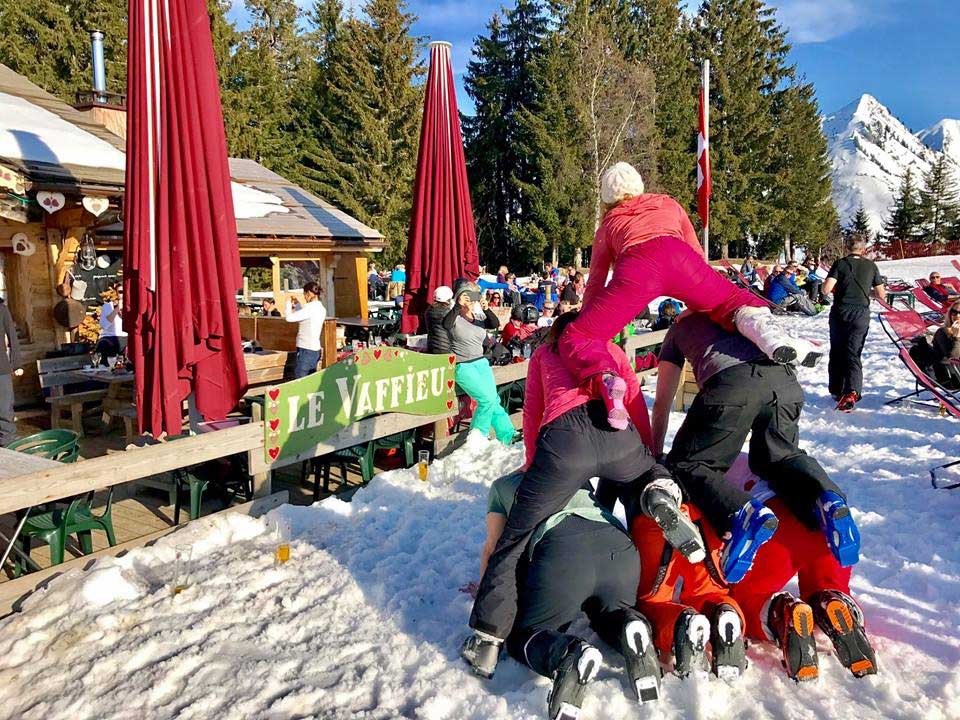 More accustomed to carrying avalanche gear in my rucksack, than après props, I realised that this would be a week of ‘girlfriend skiing’ and may possibly involve days of not skiing at all. All that would be needed was a five–hour debutante’s pass, procured daily, and some short piste skis for commuting to and from lunchtime venues.

It was great to see my old friends. I’d been skiing with some of them for decades. Some of us had battled our way off the nursery slopes together - a fellowship that is hard to beat. It was only really me who’d taken skiing too far. They could now cruise the blues and reds, and that was all they wanted to do – that and party. They had no aspirations to go into the backcountry. They could ski well enough to enjoy a day in the mountains and that was surely enough?

After 'Vaff' we skied home down piste ‘B’ with a member of the piste patrol, reassuringly sweeping up the merry stragglers behind us. The blue run meanders through the forest and at that time of day (5pm), it is more or less empty. The air is still and the light is fading; it’s a magical time to be skiing. We headed to our accommodation to get changed - we’d had enough of dancing in ski boots. 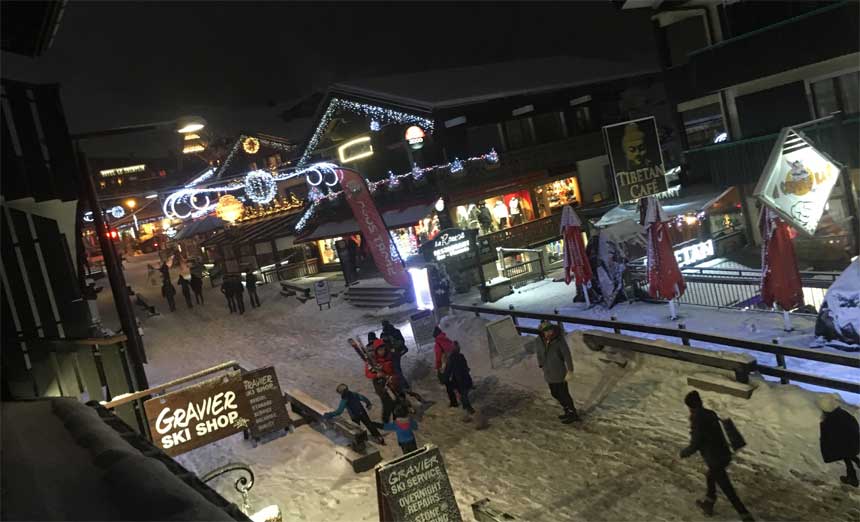 We were staying in the centre of town on the Taille de Mas - Morzine’s version of the Las Vegas strip (above). While possibly a bad place to stay for an undisturbed night, we would be making most of the late night noise, so it didn’t matter. Worryingly, the flat was directly opposite the Buddha Bar.

Officially now called the Tibetan Café, the Buddha Bar (below) was the scene of many an après alien abduction during my time as a chalet host - large parts of which I have no recollection. The bar was gutted by fire last season, but it has now reopened and it continues to be a place of fascination. At least it now has a fire exit.

Each evening the bar goes through phases. In the early evening, it seems like just any other après bar with a rubbish band belting out sing-along rock classics. Later on (after midnight), the DJ (Pappie) increases the tempo and all manner of Alpine life forms materialise. It’s dark, steamy and hot. As the Jager bombs and toffee vodkas go down, the hedonism goes up. Middle-aged holidaymakers dance with seasonaires and French locals.

Like the Hotel California, once in the throng, suitably lubricated, I found it almost impossible to leave. That was until the lights went up at 2am and I’d realise the Lithuanian supermodel I’d been throwing shapes at was really Audrey, a mother of two, from Birkenhead. Well, that’s how it used to be. Now, like Phil Collins, I don’t dance. 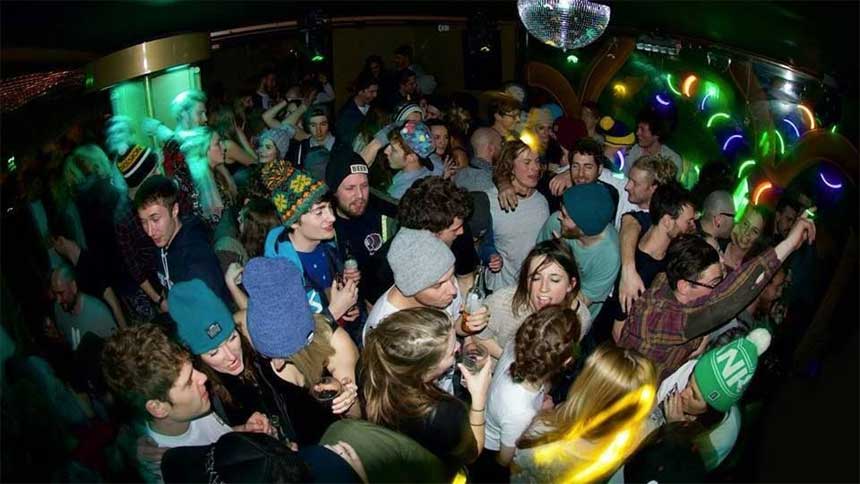 The rest of the week had a familiar rhythm. After dragging ourselves onto the slopes by midday we’d have a very late lunch up the mountain and then move on to the après. The week’s well-tested itinerary was as follows:

Monday evening was ‘Open Mic’ night at the Rhodes bar. Selling proper beer and pukka pies it’s Morzine’s answer to Wetherspoons. I don’t know how many international music careers have been launched at this karaoke for wannabies – I suspect none.

Tuesday night was French band night at the Marmot d’Or. Slightly out of town, and too far for tourists to venture, the place is frequented by a mix of ex-pats and pisteurs who drink Pastis and dance to a band which is squeezed into the corner of the tiny bar - revellers frequently falling onto the drum kit, amusing everyone but the drummer.

Wednesday was seasonaires night off. You can tell this because everyone in Beanies Bar was in fact wearing a beanie and using credit cards to buy single drinks for themselves.

Thursday night was spent listening to The Mics in Dixie’s back bar. For 20 years, this Irish fiddle band have been belting out classics from the Dubliners and U2 in the dark, damp and smelly cave - everyone knows the words (mostly) and everyone drinks Guinness and pretends to be Irish.

Friday is Goat Village day. The Lindarets Village, only accessible by ski, is a collection of farm buildings that has now turned into a gastronomic hub. Everyone has their favourite eating shed in the village. My crew traditionally drink Jeroboams of rosé in the Le Petit Lindaret – and the men flirt with its Romanian waitresses. A friend’s 19 year old niece joined us, a debutant; she ordered the chicken nuggets from the menu enfant, which she then washed down with rosé - a promising new member of the Morzine Crew.

And every night seemed to end in the Buddha. Every morning I’d wake up with my head spinning but grateful that the après aliens had deposited me in the right bed. I’d wonder how on earth I managed to function when I was a chalet host. After many a similar evening, I’d get up at 8am, fetch bread, cook breakfast, wash up, excavate Landie then drive my guests to the lifts. I’d even ski with them some days.

While drying out on the plane back to Birmingham I reflected on my three-week tour of the Alps. A week of après in Morzine had been the perfect end to it. I’d forgotten that ‘skiing’ wasn’t all about the skiing. It’s mostly about enjoying the company of friends that you do it with. Although I missed the kudos, I concluded it was much better being a punter, than a geriatric seasonaire in Morzine. A week of that lifestyle is enough for any man who only has one liver.