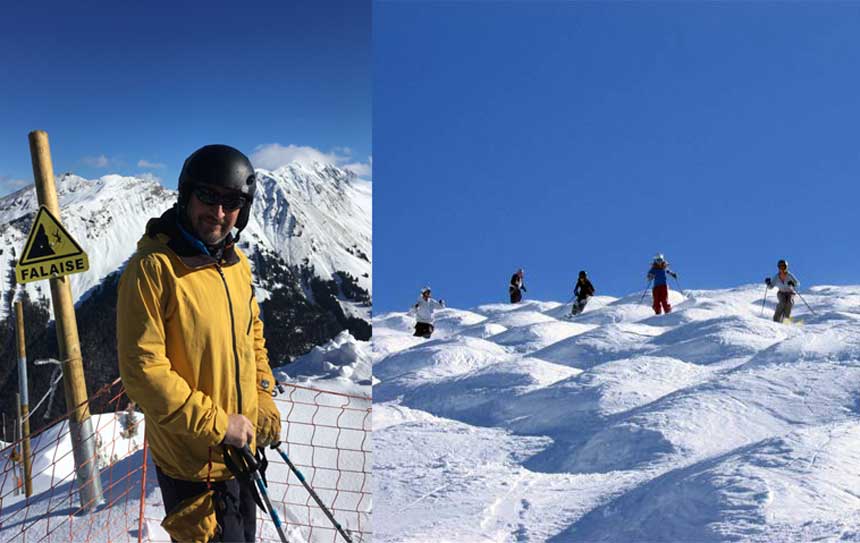 Holiday? More Like Classes in Confidence Crushing -with Moguls

Faced with a week of Ski Club of GB lessons in Meribel, would Chris be skiing with more demons? Or would monsters in the form of moguls created by the holiday hordes be his biggest challenge?

I’ve always disliked having skiing lessons. They seem to serve only one purpose – to destroy the self-image I manage to restore after my last lesson. That image is one of a ‘good skier’ who can ski down most things without falling over.

Having forgotten the above, I headed to Meribel with the Ski Club of GB to lead one of their popular All-Mountain Development holidays, although by my definition, they have stretched the word ‘holiday’ a little far. But if your mission is to become an all-mountain skier, then seven full days of tuition, by top BASI instructors in the famous 3 Valleys is a very attractive proposition.

My last visit to the 3 Valleys had been over two decades ago, when I was not much more than a beginner. Many of my skiing demons had been born on its famous slopes and I was interested in skiing them again as a self-certified ‘advanced skier’.

Unfortunately, not even the SCGB can control the weather. It hadn’t snowed in Meribel for two weeks and the off-piste element of the course became a master class on how to ski moguls.

The various school half terms seemed to stretch well into March, this season, and the Meribel pistes were crowded and even some of the blue runs became bumpy by midday thanks to the excessive traffic.

You either like mogul skiing or you don’t. I don’t. Those who do, have issues too complex for me to adequately discuss here. However, moguls are an unavoidable consequence of busy pistes and a technique for dealing with them needs to be in every skier’s armoury.

My inner chimp controls my legs

Our instructors avoided the black runs in the mornings, leaving them to soften in the baking conditions. However, after lunch I think a génépi or two would have been a better ‘digestif’ rather than bouncing down their monster moguls - no matter how soft they had become.

Like most instructors our BASI boys were patient and relentless. If you failed to implement a suggested change to your skiing stance they would reiterate, rephrase and re-explain the reasons why you should, until you got tired of listening to their voices. I felt like saying, “I know exactly what you want me to do – I just can’t do it”. My inner chimp controls my legs and he already knows how to stay upright and is not open to any new suggestions.

I had once aspired to be a BASI instructor, but somewhere between my Level-1 and Level-2 I realised my impossible quest was ruining my enjoyment of skiing. I would never ski the BASI way and I was better off with my self-image. I told myself, ‘There are many ways to successfully slide down a mountain. I don’t have to do it looking like them – I’ll just ski like no one is watching’.

The 3 Valleys were as I remembered them. The Russians in Courchevel were still beautiful, the buildings in Val Thorens were still ugly and everywhere was still eye-wateringly expensive. The pistes were still full of kamikaze youth treating slower skiers like slalom poles, with scant regard for their safety. Despite feeling like I had a target pinned to my back, I found the slopes less intimidating and this time they were mercifully free from ski demons.

By the end of the week, I did manage to silence my inner chimp and some of the instructors’ advice seeped in. I believe my mogul skiing did improve and my indigestion abated. So with swollen knees, I retreated back to Morzine for an actual skiing holiday. Despite being forced to attend ski school for an entire week, I enjoyed my return to the 3 Valleys. It is an incredible skiing area - just don’t go there in early March, remember to take an oligarch to pay for lunch and always wear full body armour.