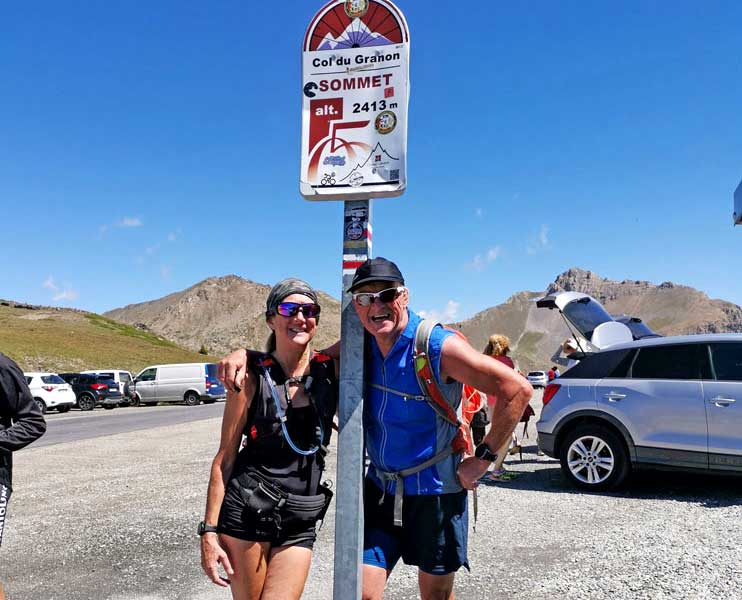 So it was Big Wednesday, yesterday, as we ran up the Gruesome Granon. It's just over 1000m climb and 11.4k, hard enough on a bike, as many will know, but even more of a challenge to run...

The Big Three, Granon, Galibier and Izoard, are all Holy Grails for many a cyclist and hiker - and a very few runners - visiting Serre Chevalier. Last week we ticked off the legendary Col du Galibier, often featuring in the Tour de France, and this week it was the Col du Granon, that the TDF peloton last climbed 36 years ago. This year the Tour de France will finish Stage 11 at the summit on 13th July (check details here).

There are plenty of cyclists slogging up the Col du Granon everyday, plus there are those on e-bikes, whose assisted ascent seems like cheating when it comes to col bagging. We rarely see any other runners though doing the classic cols unless it's the Defi du Granon, this year on 15th August. On Strava, I have the women's Crown for running up L'Ancienne Route to the top of the Col du Galibier, simply because I am the only woman who has done it!

It took Gav 1hr 53m, and me 2hr 1m to climb the never-ending road snaking up and up to the summit of the Col du Granon at 2413m. There are currently none of the classic kilometre signs ticking off the distance to the top, which is a bit of a blessing as the gaps between them can seem achingly long. It could be the fear of col sign-bagging as in nicking them, that has meant holding off their installation until just before the Tour de France goes up there in less than two weeks time.

The plan had been to come down in the van, for Gav to  drive it to the col before our run up, cycle down and lock his bike to a fence but there was the worry of leaving his bike - albeit locked up just outside the Gendarmerie on the St Chaffrey road near the start - plus the fact that I'd be hanging around waiting. So, yep, we had to run down the 11.4k, which made it slightly longer than a half marathon with a 1000m climb thrown in.

Ironically, pounding down the 1 in 10 descent is even harder on the legs than going up.

So six days to recover and then, next week, it's Col d'Izoard on Tuesday when it's cols réservés, as in no cars or motorbikes allowed between 9am and 12 noon. But I'll be running on my own, as Gav will be back on his bike, preferring the descent on two wheels rather than two legs. And it's too much tarmac road  and potentially too hot for Ullr the Puller.