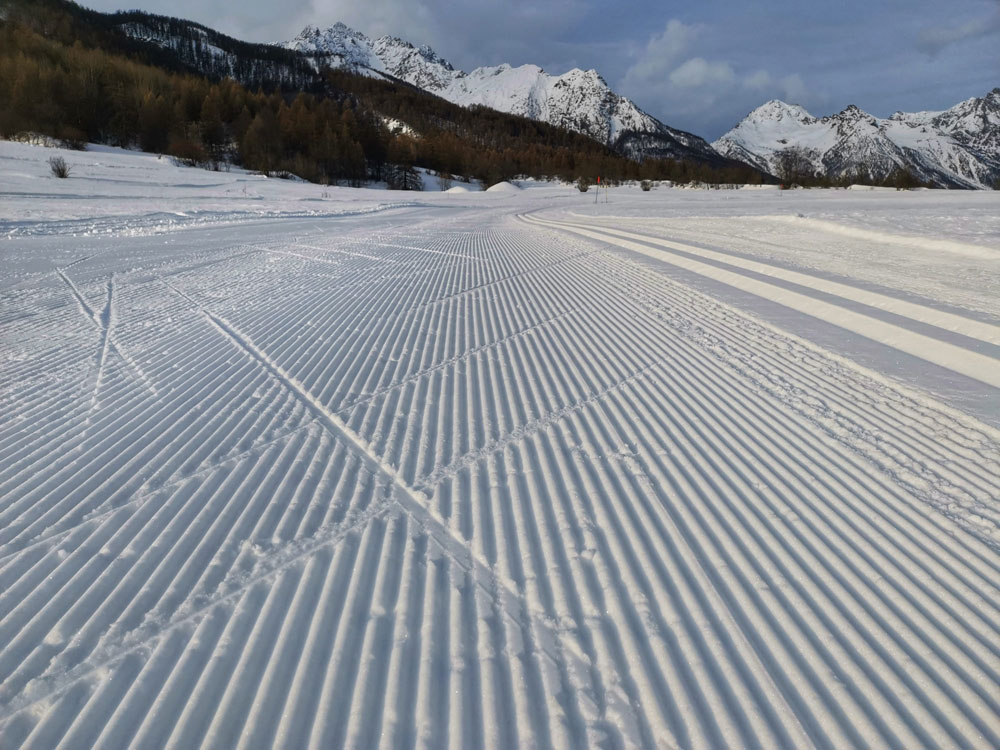 It's almost as good as first tracks in powder!

As most will know cross-country skiing is a great workout, and what you may not realise is that there are two disciplines, Classic and Skating.

Classic is the original version of cross-country and probably is the most popular one that most beginners try. In classic, you ski in the tramline grooves that are found on the side of the piste, which you can just about make out in the image at the top of the page.

I too started off with Classic but I soon was envious of the skiers effortlessly gliding past me, and also having somewhat of a competitive nature I didn't like being passed by so many people; so I started out on my skating journey.

Unlike Classic, skating can use the full width of the piste, though the size of the pistes will vary by location and terrain, as it's not always possible to have a wide open piste like in the image above where people can ski in different directions on the same piste without fear of collision.

Cross-country skating is at a whole different level when it comes to practising compared to Classic; I often explain it as similar to swimming, most can swim some version of front crawl or breast-stroke but compare your style to that of an actual competitive swimmer and the difference is huge, as it's all about technique and effort and finding the right balance to be almost that machine-like torpedo skimming through, or almost on top of the water!

When I first tried skating, I could not believe how shattered I was, and it was not as if I was unfit. I quickly realised that a lesson or two would be sensible and I remember my instructor laughing as I commented on what my heart rate was after a few minutes.

I've just looked at my Strava diary and I first skied Classic in 2014 but not too often, and then had my first skating session in February 2018, and I titled that;  How tough, how painful? First cross-country skate style lesson; and I probably couldn't appreciate how superb my surroundings were either :)

So I've been going for five years now, and at my age, each year maintaining fitness gets more difficult, however, thanks to Strava and its segments I can see how fast I am and I can also compare my times with others, and bearing in mind I was a very late starter compared to most of the locals here who learnt cross-country when they were at school, I'm please with my ranking(s), and if I look at my ranking by age I'm in the top 20%.

But it's been hard work, and a 10km session is far harder than a 10km run for me at least if I decide to do an easy 10km run I can control the pace and effort I want to run at, so I could easily achieve a 10km with an average heart rate of 130 bpm in cross-country skating that is impossible for me.

In Serre Chevalier, we're blessed with superb pistes that are maintained extremely well, and those pistes are more or less a 500m walk from where we live, and we can see if people are out on them. 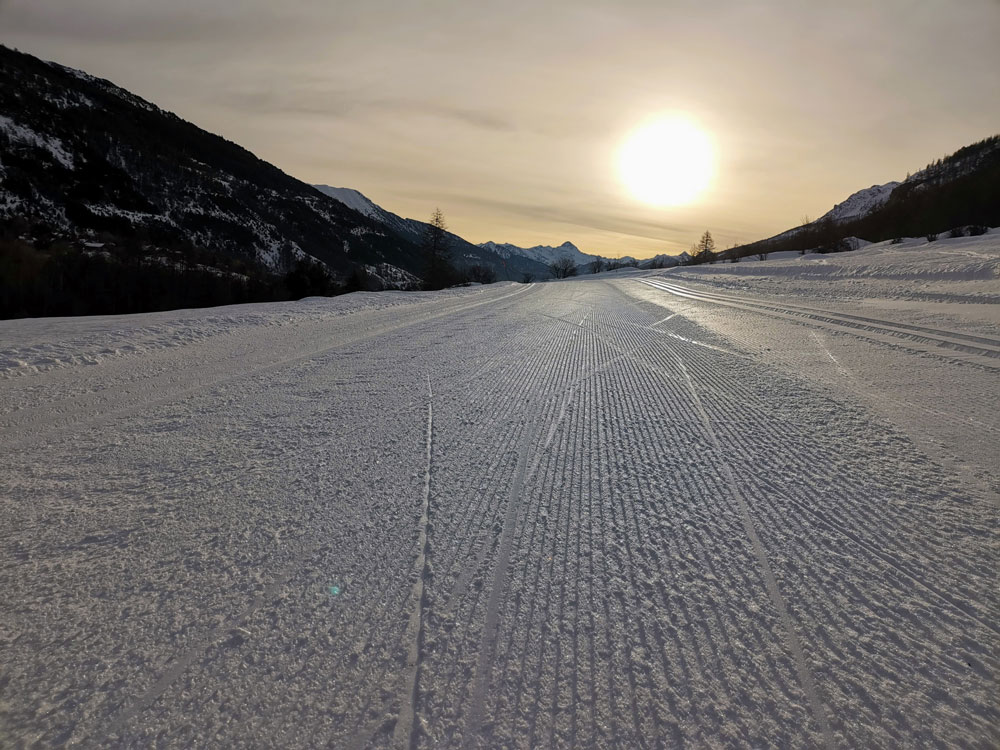 The only issue is that the piste is a blue, and in some places, I think should almost be categorised as red, as there are some climbs that whilst not steep really take it out of you and with poor technique you have to rely on brute force and hence a high heart rate.

However, the inclines whilst initially showing up your poor technique also do show that you're getting better over time, and in my case, my target is not to go as fast as I did before but to maintain a good pace with a much-reduced effort (heart rate).

And it's the maintenance (grooming) of the piste that can be the difference between a good session and not, especially when skating.

In cross-country, it's all about gliding and that is enhanced with as little friction as possible, hence waxing skis is so important, especially in Classic, though here I have to be honest and admit to not being too hung up over waxing, maybe that's further along in my journey?

And it's the quality of the piste that will make all the difference to your gliding potential. As gliding on one ski is normally the recovery phase in skating, a longer glide equals no effort and hence longer to recover before the next exertion phase.

However, if the piste is soft and claggy then there is a substantial reduction in the gliding potential. And those conditions are usually a result of high temperatures softening the snow into the equivalent of paper mache or worse.

Almost the opposite of the paper mache is the hard boiler plate where all that lovely groomed corduroy has been scraped off after too many skiers have skied along using their edges to gain purchase in the ever-decreasing grip of the snow.

And it has been just recently that I've encountered both of the above, especially with the British Army now out here training and racing on the same pistes, so every morning I check the excellent Nordic Serre Chevalier FaceBook page that provides a daily update.

And that basically means get out early to assure yourself of the best conditions.

Like Alpine/Downhill skiing there is something wondrous about being first down that perfect corduroy as the edges of the skis grip as you transfer your weight to the other ski.

And it XC skating that is so true, on a slight incline you can angle the skis to hopefully grip, push and then glide, even a little. Though it can be a little disconcerting if a far better athlete has been out before you and you can interpret his tracks and from those gauge how much better his whole technique is as he leaves a deep groove where they push off from and then a very defined track where they are gliding, before pushing off again.

I'm a long way off opting for XC first tracks on a bluebird morning vs First lifts and untracked off-piste, but it's another wondrous way to enjoy the mountains.

And as I started to write this up and with the snow falling albeit lightly outside I decide to go down and do some drills and see what 5cms of fresh snow would be like on the piste as I had read that fresh, powdery snow is ideal for skate skiing, as it provides a smooth and even surface for gliding, but I had my doubts and they were soon confirmed as in no way was it as enjoyable as a perfectly groomed piste and in the sunshine. 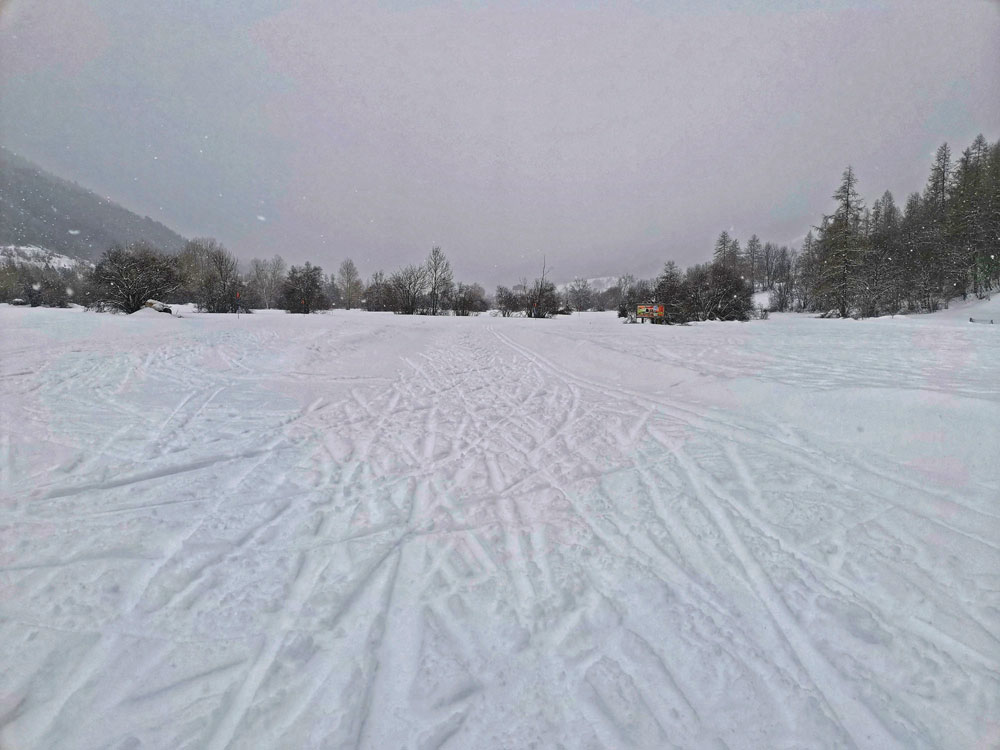