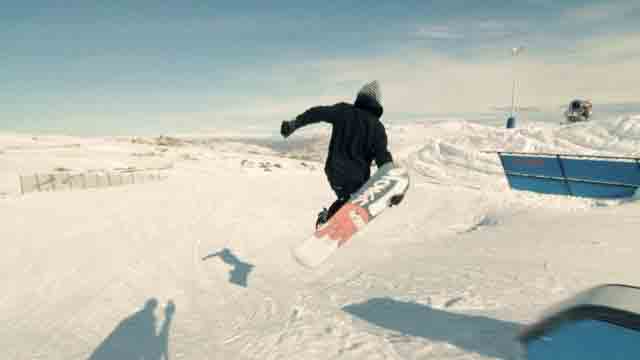 When pro skier, Jossi Wells (above) started shredding it in the park no one blinked an eye until they realised that he was on one plank instead of two.

But going over to the dark side - or light side depending on where you stand (and on what) and being able to swing downhill both ways - is a natural progression of mountain craft.

Of course, on the piste, snowboarders hate skiers who weave slowly in front down the piste and cross your path without a thought for a boarder's one edge. But, honestly, wouldn't a boader give their heshy trousers for ski poles on the flat bits?

And, skiers, hate the swooping sound of a boarder behind, possibly out of control and unable to stop. But, hands up the skier who does't envy the way boarders surf the powder like it was one huge rolling wave.

So, admitting that each has its advantages, is the first step towards walking (or riding) in the other’s boots.

Plenty of skiers became 'gays on trays' in the early days and have now gone back to 'wanks on planks', partly due to the difference that 20 years makes creating stiff knees and an inability to stand up after stacking it in deep snow.

Some do both, ski and snowboard, depending on the conditions. Call it, Skoarding. They can, also, cross country ski and have tried snow kiting. And, if they really have good knees, they have taken up telemarking, too.

NO PAIN NO GAIN

I have also seen a 22 year old seasonaire ride a snowboard for the first time. He headed straight for the park and, effortlessly, did a 180 off a rail but he couldn’t link a turn on the piste.

There is the argument that it is better to be the master of one sport rather than the jack ass of several. Being able to ski or board well is hard enough. Also, some who has skied or boarded since they were young will be reluctant to start again – and, in the case of boarding, face the pain factor.

But no pain, no gain. What you gain by learning another mountain craft is worth the potential embarrassment of going back to the nursery slopes. It, also, creates a broader understanding of how others on the slopes operate. If you have boarded, you know not to turn abruptly across a slope on skis, in front of a fast-travelling rider.

Ultimately there is no limit to the mountain sports you can take up – except, perhaps, the depth of your pockets to pay for the kit and the capacity of your top box.