Day 14 Lockdown Getting Into Dangerous Territory 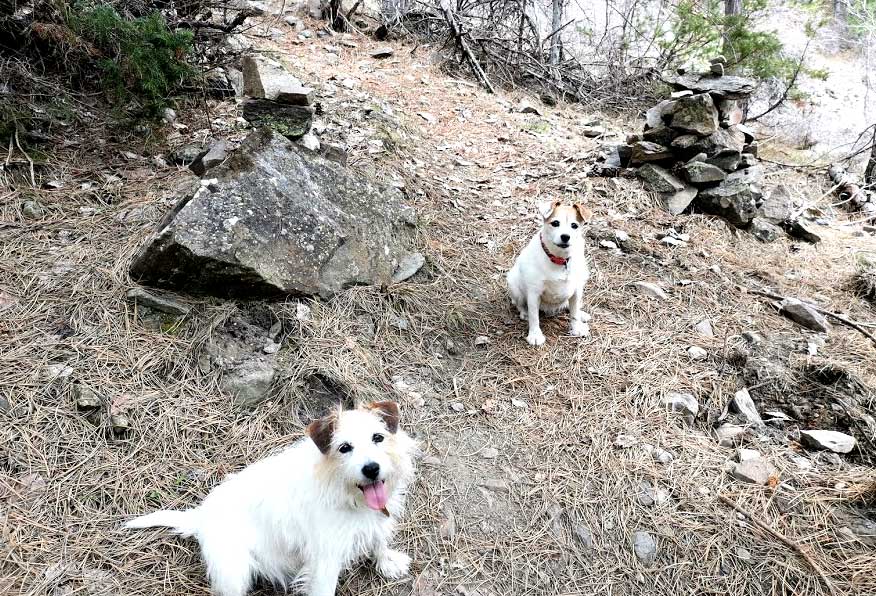 GO YOUR OWN WAY

This should have been the last day of lockdown, instead we have at least another two weeks so route-finding is a new pastime that takes us into dangerous territory (domestically-speaking)...

Today was originally our last day of lockdown before France declared another two weeks taking us to 15th April. It'd be a lot easier if we weren't facing the slopes of Serre Chevalier, with transforming spring snow. What was worse, today, was seeing a lone skier coming down Casse de Boeuf at around midday, making beautiful fresh tracks in the corn snow. Give it another week and I think we'll be frustrated enough to partake in some stealth ski touring and risk the fine.

Meanwhile, how to break out of Groundhog Day? We can slightly vary our exercise routines. I can run 10k the reverse way, Gav can change the workout on his Sufferfest or we can do a different route on our daily dog walk.

This is dangerous territory, domestically-speaking, as it is when we bicker about which way to go (I know, not exactly a third world or even a global pandemic problem). But Gav loves using smart mapping, signposts and cairns to decide our route and I prefer to freestyle and see where we end up - and, yep, sometimes having to turn back from that cliff edge. So, now we take it in turns each day to navigate  but when it's my turn Gav still can't resist surreptitiously looking at his maps on his phone and sighing profoundly.

There's so much we all take for granted apart from skiing, that we miss now especially not seeing family and friends except via face-timing. Also shopping. In need of some retail therapy, yesterday, I was browsing the internet for new ski gear. I'm on a quest to find some lightweight skis around 106 wide with rocker for powder ski touring, length 169ish. So I put 168 DPS 106 Tour 1 skis in my basket at the great price of €500 and, on another site, I also bought some of my favourite brand skiwear, Elevenate. And then I emptied both baskets because will they actually be delivered? And do I really need them now seeing as my next day's skiing is probably eight months away?

So, yes, we're all suffering, but this is super-dangerous territory for the ski industry. I just hope the ski shops and brands can weather this mighty coronavirus storm.

The New York Times reported that in the USA skiers are pouring into the backcountry now that the resorts are closed. One snowboarder was seriously injured in an avalanche, last week, involving a 30-strong rescue crew and heli to take him to hospital and into intensive care. So now the Americans are wondering, as they did here in France, should ski touring be banned in order to save rescue crews and hospitals at a time when they need their services because of the mounting coronovirus crisis?

Public officials have begun imploring the skiers and snowboarders to scale back. The Colorado stay-at-home order, which went into effect on Thursday, does not actually prohibit activity on the mountains. But on Friday, Gov. Jared Polis clarified the order and strongly discouraged travelling to the mountains for exercise stating, 'It is not a competition to see what you can get away with'.

We learnt, yesterday, that there are currently three coronavirus cases here in Briancon hospital. And in the Haut Alpine total area there has, thankfully, only been one death. This, of course, is really good news with the lockdown now on Day 13, indicating that restrictions have worked in the more remote mountain areas and so the chances of more cases should be minimal here in Serre Chevalier.

But the PGHM are still chasing down ski tourers, even locals, and fining them. As the hospital isn't exactly overburdened with coronavirus patients, could/should we be able to go ski touring maybe from Day 15, the original limit for the lockdown? When I say 'we' I mean locals, people who are living here ie not allowing an influx of ski tourers from outside the area, which was part of the problem in the USA.

Of course, then there's the problem of only being able to exercise one kilometre from your home, which here in France is the national decree under lockdown. Damn it, that only take us up to Le Bez.