Day 3 Lockdown in France and Another Emergency Rescue 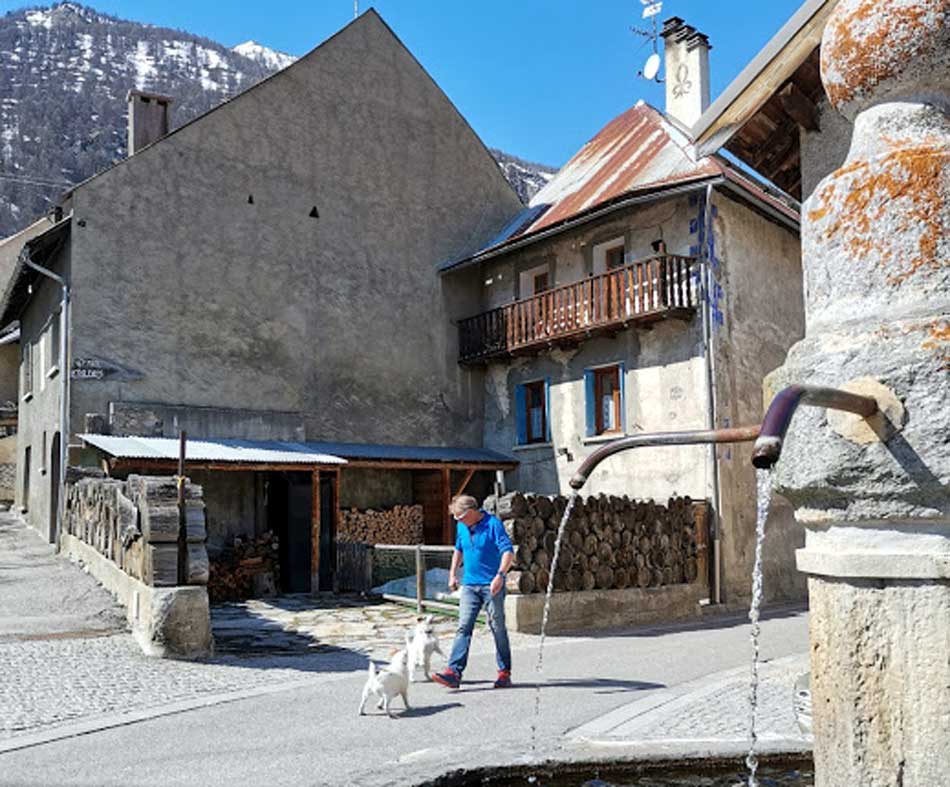 Dog walking is one activity currently allowed during lockdown in Serre Chevalier deemed unlikely to involve the rescue services. But when you have a fearless Jack Russell anything can happen...

So we have resisted the temptation to ski tour, even though we can still see a few flouting the request from the PGHM to not go up or down the mountain (read yesterday's Ski Blog).

What else can we do? We can jog within 2km of our home and/or walk the dogs - known as the Rando Chiens because they ski tour with us. Yesterday, we took them for a stroll up to the deserted village of Le Bez (main image), throwing a tennis ball into the nearby fields for them to chase after.

Now hands up, it was my fault. But Beanie loves a bounced ball, jumping to snatch it in the air after the first bounce. So when we got to the top car park above the Frejus lift, I threw it up for her to catch. Well, Beanie missed it on the first bounce, pushing the ball with her mouth on her next two or three attempts so it travelled fast 50m across the car park with her in hot pursuit. Then it disappeared over the edge of the concrete river wall, swiftly followed by Beanie.

With my heart in my mouth I sprinted across not knowing how high the concrete wall was at that point or how much the river was in full flow? As I came to the edge I could see that, where she flew off, it was at least a 7m drop (see left side of the image below) where the river, fortunately at this time of the year, was just a fast flowing stream.

And there was Beanie, looking a tad bewildered but miraculously none the worse for hurtling off into what must have seemed quite an abyss, thankfully landing on the patch of snow instead of the rocks. 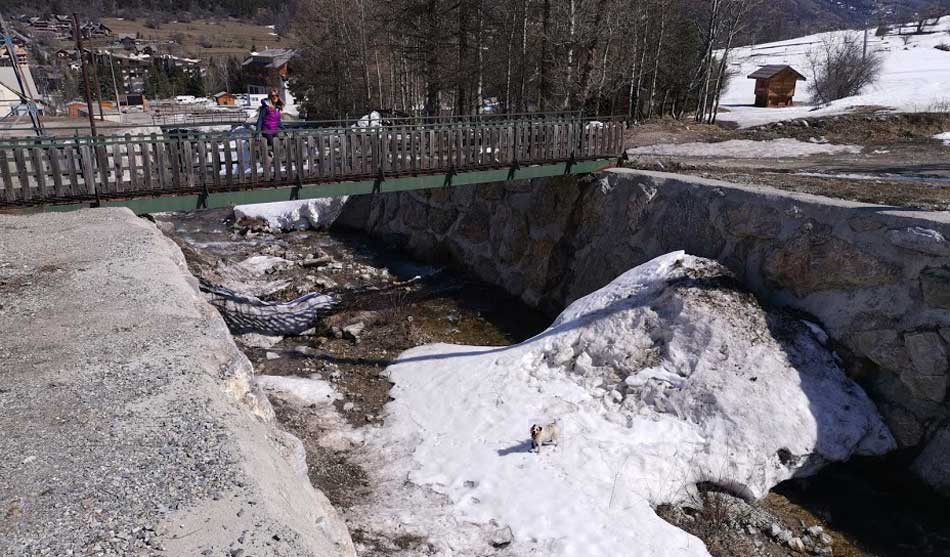 So that was the good news. The bad news was that the concrete wall is an almost sheer vertical drop on both sides so, while trying to keep Beanie calm, we ran up and down looking for somewhere to climb down. Gav, by this stage, was dreading the fact he'd have to make another call to the PGHM, which you'll understand could have been awkward so soon after yesterday's incident if you read his Ski Blog.

Then I spotted a bank of snow on the other side, about 100m away but it would mean Beanie wading across where the water was getting deeper and flowing fast. 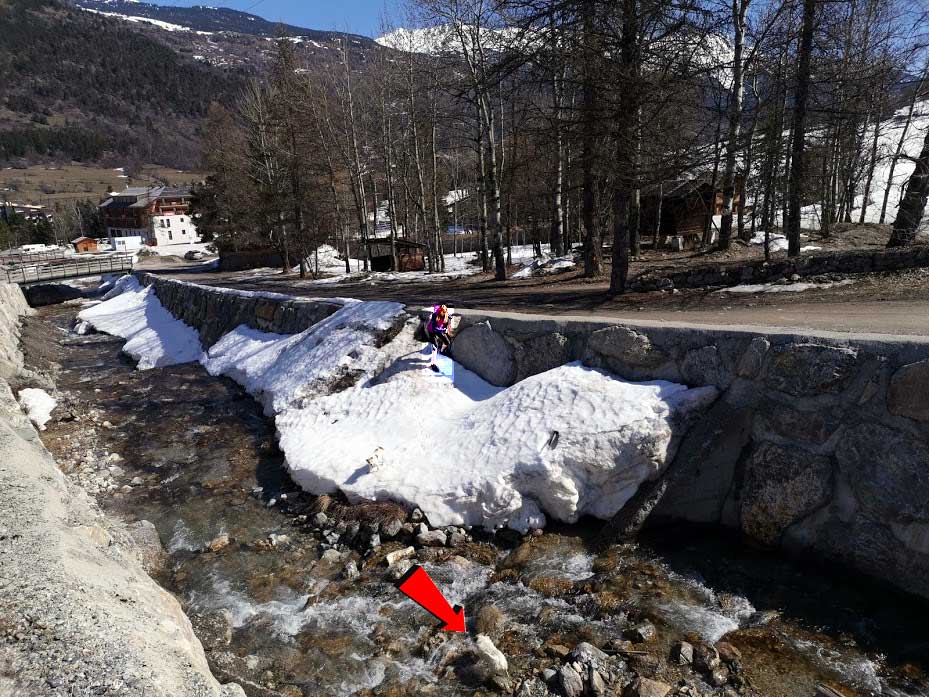 As Kiki (our other Jack Russell) and I crossed the bridge and clambered down the icy snow pack, Beanie wasn't going to wait any longer for rescue but plunged into the water and made it to the snow bank. 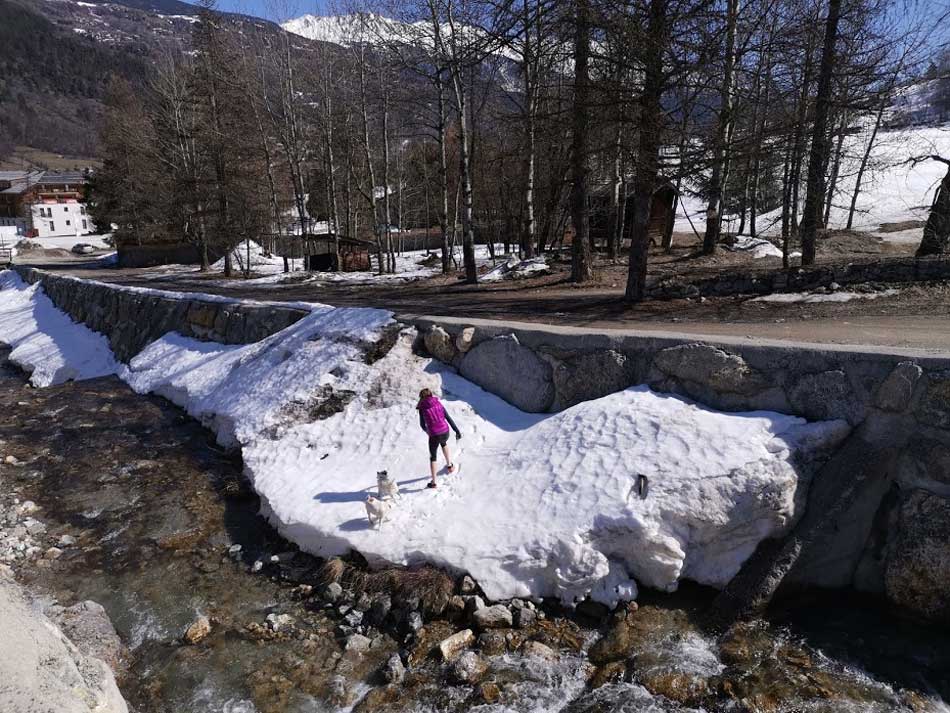 With a shake she was absolutely fine and had the audacity to look at me to throw another ball (the original one being in the stream somewhere).

Having survived that adventure she's now known as Rambo Chien. And it goes to show that walking your dog is not necessarily the safest option to avoid calling out the rescue services! 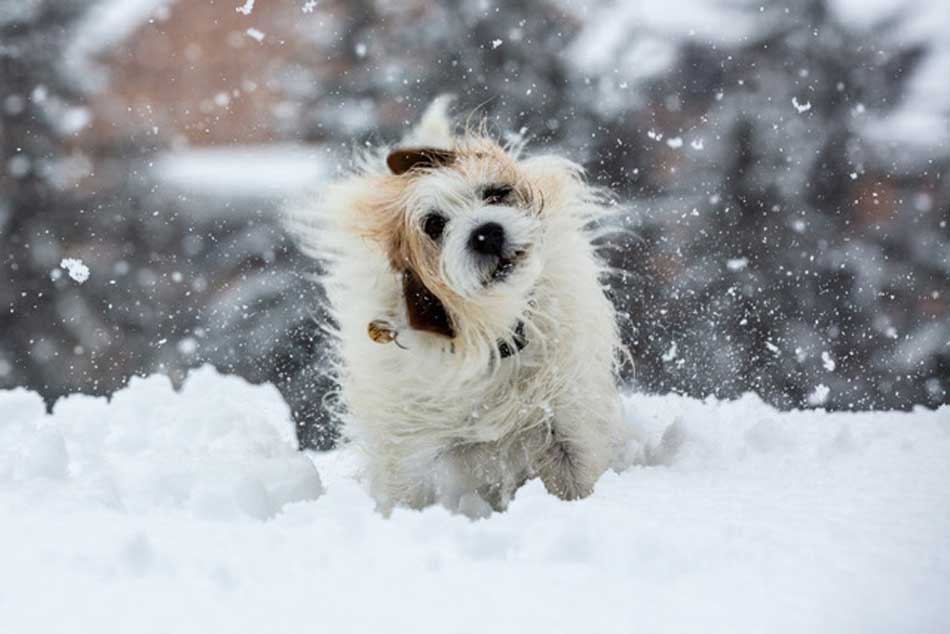