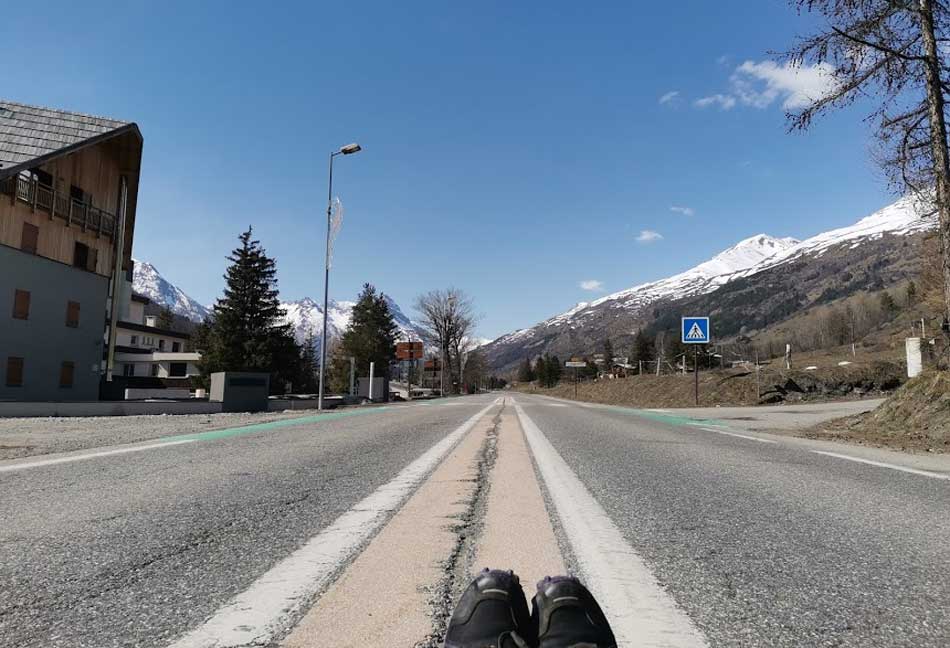 THE FIRST RIDER OF THE APOCALYPSE

As Pestilence, the First Horseman of the Apocalypse is riding the earth and the PGHM is hunting down ski tourers, we're left to run on (or lie in) the eerily empty roads and hike in the hills behind us...

Hands up who's waking in the early hours and worrying about family, friends, the future? Staying here in the mountains in France while our daughters are in the UK is a hard decision, especially for me on Mother's Day. How long will it be until we're all together again?

But it was only a week ago that the resort shut, and less than a week since Macron put France on lockdown. At the time it just seemed that we had to sit it out for 15 days, but now who knows how long it will be?

One of the most disconcerting aspects of the coronavirus effect

The inability to plan ahead is one of the most disconcerting aspects of the coronavirus effect. We're all used to planning where we're going for the summer holidays, what we're going to do for Easter, which bar to meet at tomorrow? But the long term worry of finances on a personal and international level is a bigger one for all of us. Hence lying awake at 3am.

Ironically is anyone lying awake worrying about catching coronavirus? With Pestilence,the First Horseman of the Apocalypse seemingly riding around the globe and the Fourth, Death, not far behind, I guess we should be fearing the Second as in War and the Third as in Famine (already apparently riding through the UK supermarkets).

So far our fitness hasn't been affected

We're now awaiting the next blow to fall, the one where Macron decrees that we can only go within 500m of home (and, er, that's sadly not vertical!). So far our fitness hasn't been affected. I have a 5km circuit that I can jog around carrying my exercise permit, and, yesterday, was able to lie down and take the photo, above, in the road that was eerily empty of cars at midday, even in France when it's lunchtime.

We have both been hiking with the Rando Chiens (dogs) keeping to the permitted 2km from home but going up behind our apartment for a more interesting route and to stay out of general site in case this is considered a mountain activity. If all else fails as in we have to stay within 500m, then Gav has his turbo set up in the garage for extreme cycle sessions and I have the grassy bank beside us for short high intensity interval training. Also a skipping rope!

The PGHM have been hunting ski tourers

We have managed to resist the very tempting urge to go ski touring, although the snow has been transforming for perfect spring skiing. We've read in Le Dauphine that the PGHM have been hunting ski tourers in the area and surprised three randonee skiers at the Refuge de l'Alpe in Villars d'Arene. Summoned to descend , they were fined €135 each.

If we knew we'd get a three or four hour ski tour in before been spotted it'd almost be worth the fine.