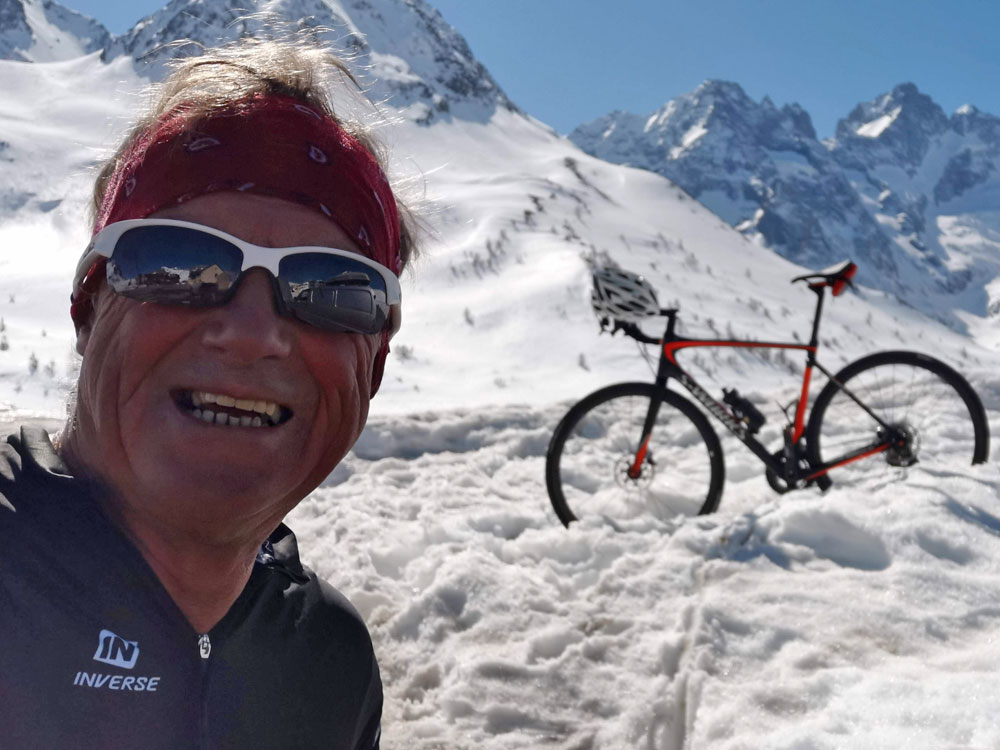 So what is allowed and what isn't?

There still seems to be some confusion? While most are now not skiing others still are resulting in us calling the PGHM to report an incident exactly the reason why ski touring is now 'interdit'...

We have accepted our fate in that we will not go against the advice of the PGHM to not ski tour. This is brought about more by the fact that, running Style Altitude we are aware of what is happening and what has been said in other departments, notably the Savoie and Chamonix.

Yesterday, while we were watching a fair number of local ski tourers climbing up the pistes in front of us, Pierre Lambert, le Préfet de Haute-Savoie was thumping the table in an interview with Le Dauphiné Libéré telling people, 'Don't go to the mountains!', more here on that.

It seems here in the past few days that the sun is now much stronger, so it was out on the bike for the first time in nigh on summer gear.

I came across no gendarmes

Armed with my attestation* downloaded to my phone, giving my address and what I was doing I left here at noon on the bike and was sort of curious as to whether I'd come across any gendarmes, how much traffic there would be and whether I'd see any cars parked up at the normal areas that ski tourers frequent on the road up to the Lautaret.

Obviously, as it was lunchtime, I came across no gendarmes, though friends who were out in the afternoon did report Police Municipal at Monetier checking drivers in cars for the right documentation.

On the ride up the Lautaret, the roads were pleasantly quiet and it seemed that most of the cars were seasonaires going home with non 05 plates.

There is still some confusion

There were a couple of vehicles by the Rif Blanc tunnel and one near the kiting area just below the Lautaret and on my descent, I saw two ski tourers going back to that car, so it would seem that, compared to the day before when there were reports of many up there, the message has got through.

It is pretty obvious though, that getting in a car and driving to an area is flouting the rules, however, it would seem that, at least here in Serre Chevalier, there is still some confusion, as for some it is possible to walk out of your house with your skis to the piste and climb up. So you are exercising close to home?

It became pretty obvious something was not right

Around 17:30 I was out on the patio and looked up towards the Casse du Boeuf piste and saw a skier on the final steep section just above where the blue Marteau splits off before the black continues on down.

Due to his speed, I was not too sure if he was climbing up or skiing down which was pretty bizarre given the time of day, so I grabbed my monocular telescope and watched him and soon it became pretty obvious something was not right as he just could not ski and was having various problems. This was also confirmed by Elaine who took the scope.

He edged down slowly and disappeared

We watched him for a good 10 minutes and we thought the same, that he must be injured but was slowly making his way down. He then went to the edge of the piste by the forest where he edged down slowly and disappeared. Now the piste there is 150cm deep above the forest floor and if you fell down and were injured it would be very difficult to climb back up.

So we carried on watching for any movement, debating whether we should call the PGHM as it would soon be dark. In fact, it was a very similar situation to when we lived in front of the beach on the UK South Coast and we would be concerned over various kite and windsurfers who looked as if they were in trouble. Were they making their way back into shore or not?

And the same debate, should we call the RNLI?

Eventually, I made the call to the PGHM at 17:50 and explained the situation as best as I could in my French, and I thought we agreed that they would come to our address where I could show them exactly where we'd last seen the skier, and then it would be a fast 20min skin up to search for him.

However, 40 minutes later, still no sign of the PGHM and I became concerned that there might have been an element of lost in translation, so I visited a neighbour who is also an ESF instructor and we called (18:42) the PGHM again and, yes they were waiting for me to call back, which seemed a bit strange given the circumstances?

To cut a very long story short, at 19:26 Briancon PGHM called me and I had a long discussion in English explaining what I had seen and finally, at 20:27, my neighbour called to ask had I seen the lights up on the piste?

Had someone been reported missing?

Over the course of the next hour, Briancon PGHM called me a further three times while their guys on skidoos were looking, with me via the phone trying to advise, now in darkness, if they were searching in the right area, which made me wonder, had someone been reported missing?

As we did not hear anything further we assume no-one was found, and nothing in the media this morning, I'm very glad that the RNLI does not work to the equivalent response times, that said we all know that the PGHM are amazing at what they do, and maybe this was just a bizarre one-off?

It also demonstrates why mountain activities are being banned as the resources required last evening could have been needed elsewhere?

And it would still seem that there is some confusion. As I type this I've just seen someone ski down with their dog yet the local platoon (PGHM) of Briançon 'are doing prevention and pedagogy for the time being'.

Reading between the lines of this article, you will not get fined just a slap on the wrist at the moment?