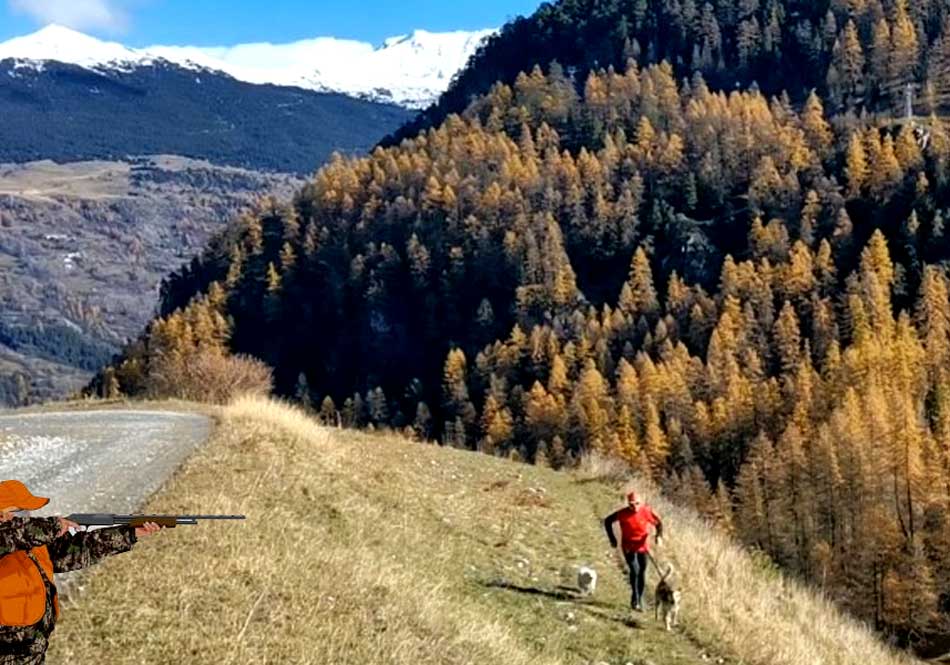 In France, it's not yet ski season but it is open season for shooting. Running up a mountain road we felt like moving targets for hunters with loaded rifles chasing deer across our path. And it was midday...

Yesterday, we found ourselves running between two sets of hunters with loaded rifles, who were chasing wild deer, here in Serre Chevalier, shattering the concept of peace in the mountains.

It was Thursday, midday, and we weren't in remote woods but running up the track, which is the road to the summer village of Frejus and the blue/green ski run down in the winter. In the image, above, Gav and the dogs are on the trail to the right of the main track.

This is one of our favourite runs, 6km to the Frejus village and 562m elevation.

I was half way up enjoying the mellow sun and golden pines that make November such a glorious time to be in the mountains (even better if there is early snow), when two hunters with rifles at the ready jumped down the slope out of the woods in front of me. I immediately called Gav on my mobile as he was about half a kilometre ahead, to check that Ullr, our young Husky-cross, was on the lead because it'd be easy to mistake him for a deer if he was running loose in the woods.

There were hunters above herding the deer down to where others were waiting below the track, so there we were running up right in the middle and potentially in the target zone if the deer had appeared.

Fortunately, the deer had more sense and buggered off up beyond the snow line.

Were we wearing high viz someone asked afterwards? No, because it didn't occur to us that we might get shot running up a track frequently used by 4x4s, trucks, mountain bikers and walkers.

There were no signs up to warn that hunters were in the area. And such a popular area. OK, yes, it's inter-season and very few tourists but does that mean it's open season for hunters to go where they like, when they like?

It's not surprising that so many shooting accidents happen in France.

It was in October 2018 that a British mountain biker was shot dead in Morzine, within an authorised hunting zone but with many well-used mountain bike trails*.

Every year, since 1998, the ONCFS - Office National de la Chasse et de la Faune Sauvage (National Office of Hunting and Wildlife) - has conducted an investigation on hunting accidents in France. There are an average of 170 accidents per year, among which around 20 are fatal.

The majority, 86 percent involve hunters and their companions, while 14 percent affect non-hunters.

Fortunately, we didn't contribute to the figures for non-hunters, this year. But you have to question how the French can allow men (and the odd woman) to roam around a tourist resort - even out of season - in the middle of the day with loaded guns!

There are no figures for the number of dogs shot by accident in France although I'm sure there are plenty. But my absolute favourite story when I did a Google search for hunters shooting dogs was: Dog Shoots Man.

In 2015 when a French hunter set his rifle against a tree and went to collect a woodcock he had just shot, his dog knocked the rifle over, managed to trigger the weapon by stepping on it and accidentally hit his master.

*Since this tragic shooting accident in Morzine, there is now an app, chasseco that shows when and where hunters are in the area. Unfortunately, the area so far is only around the Haute-Savoie. If this is rolled out to the whole of France AND it is publicised enough to everyone, including visitors, we'll all be a lot safer up the hill during hunting season.