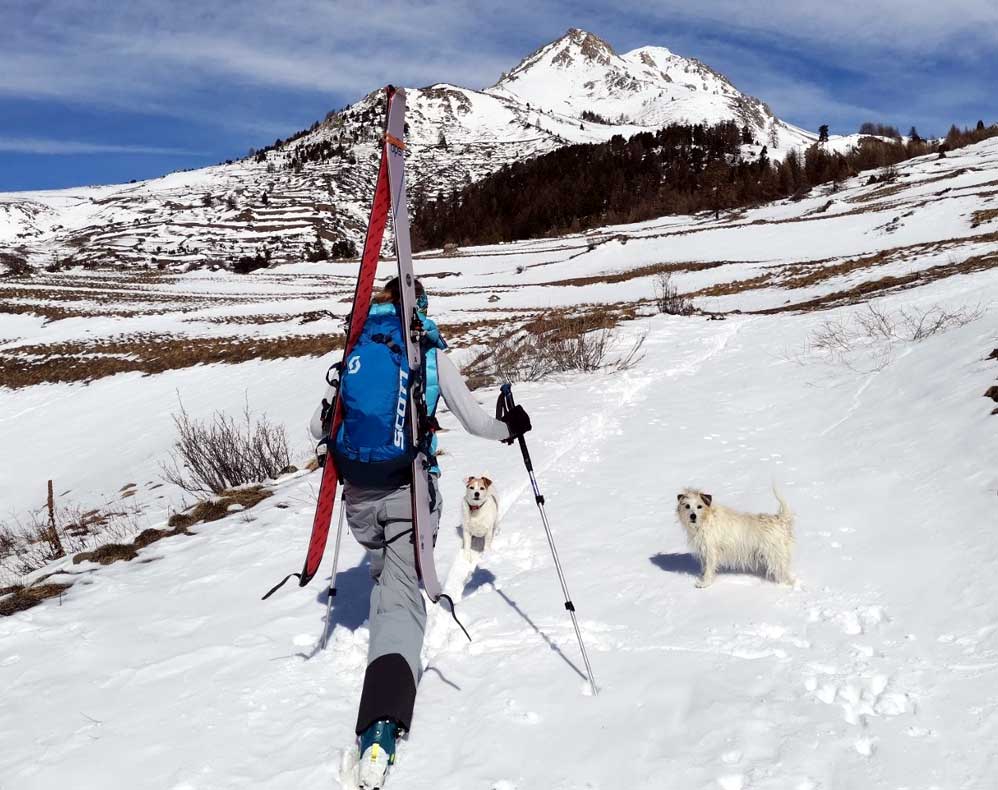 THE HOLY GRAIL OF TOURING SKIS?

The latest line from DPS, the Pagoda Tour skis, are the lightest wide powder skis on the market (widths up to 112mm) with downhill performance in all conditions never experienced from a ski this lightweight...

The DPS Pagoda Tour 106s may just be the Holy Grail of touring skis. Superlight for going uphill, with great downhill performance in powder, stable on icy piste and even a cruise on crust.

These skis tick so many boxes it's hard to know where to start.

First, their USP as in lightness for ski touring is, without doubt, one of the best reasons for buying these skis. My usual set up, Nordica El Nina 110s with Fitschi Tecton bindings weigh in at 2675g. The DPS Pagoda Tour 106s with Fitschi Xenic 10s are 1720g which is nearly a kilo less. When it comes to going uphill, that is literally taking the weight off your feet. I can carry them in one hand - or, for bootpacking, strapped onto my Scott Alpride avy bag without feeling I'm going to fall over backwards with the weight. 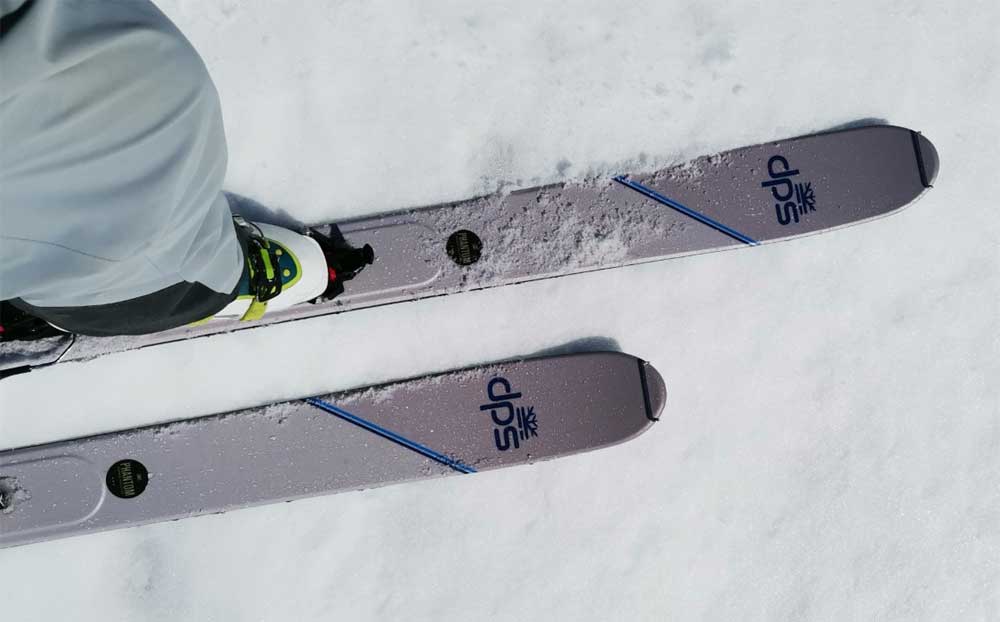 What are they like to ski though, being so light? I'm not going to extol their virtures in powder because DPS certainly know how to make a great ski for shredding pow and the Pagoda Tour 106s are no exception. Skiing the powder in the trees the other day was a highlight of what for me has been a short season (I arrived in the French Alps mid-March), but better than no season as it has been for many in Europe this winter.

What I want to talk about is how they ski ice, crud and crust, the sort of conditions where many a pow slaying ski or super lightweight one can let you down (sometimes literally).

I've skied the DPS Pagoda Tour 106s with no issues doing tight turns down a steep and narrow icy piste. There's no chatter on hardpack, often the downside of light touring skis. Also none of the other many varied snow conditions thrown at us in late March in the Alps have created any issues. Descending from 2500m in the backcountry the other day there was a biting north-westerly following some days of sun. There's currently an orange layer from the Saharan snowfall earlier in the season that has melted at a faster rate. Combined with freezng wind this has left an extremely unpredictable snowpack including breaking crust, never the easiest to ski.

Gav on Supeguide 88s was actually jumping his turns to avoid one ski digging in and ejecting him. The only problem I had was watching him ski, thinking it was going to be a mare of a descent.  In fact, it was a surprisingly easy ride down, the wider ski and the lighter weight being a positive advantage to float over and turn on the crust. 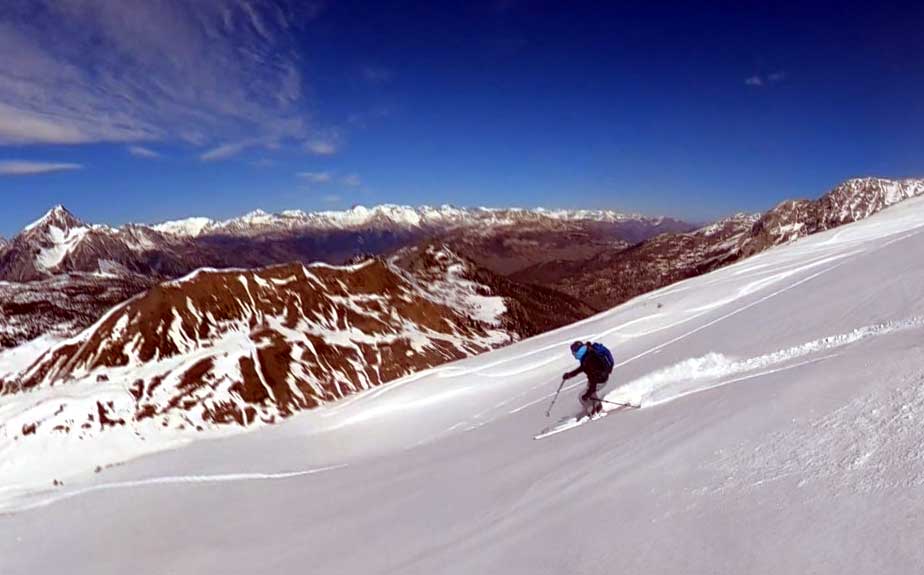 Our Backcountry Editor, Ken, who has had Phantom bases on his DPS Wailers for two winters says, 'From early season cold temps, through super sub-zero Japow and into sunny March, the Phantom performed perfectly, always gliding and once, during a tour, not icing when other skis were. Zero issues with skin adhesion and the base is still looking black after 30+ days of use, where an untreated base would have turned grey by now'. Check out his full review and application guide.

I really applaud DPS for not discriminating between men and women, offering their Pagoda Tour line in 87mm through to 112mm widths in varying lengths from 155 to 184 cms. So something for everyone, male or female.

It's also a big hurrah from me not to be offered pink swirls and flowers on my skis because I'm a woman. DPS are extremely gender neutral when it comes to the topsheet, the Pagoda Tour 106s being seriously good-looking and understated in silver grey with no frills or fuss. My only slight concern would be finding these sleek silver missiles should I lose either in a metre of deep powder.

THE ONE QUIVER SKI?

So is it the Holy Grail of touring skis? Even DPS say that the Pagoda Tour 106 is 'arguably the most versatile backcountry ski in the DPS quiver'. If you want one ski for backcountry, powder, touring and even hitting the piste now and again then I'd look no further. In fact, I'm seriously wondering if I need any of my other skis.

And a quick shout out for the Fritschi Xenic 10 bindings, the lightest and most user friendly I've ever known. With Swiss precision, these touring bindings transition from uphill to descent mode in seconds, one heel lift position adjusted with a flick of your pole, and easy release (DIN settings go down to 4).

NOW FOR THE TECH STUFF

Here's the science from DPS behind the manufacture of the Pagoda Tour line and what makes them tick (the boxes). 'By mating the DPS proprietary new carbon laminate with a combination of ash and paulownia woods, and a purpose-built aerospace grade foam – that features incredible physical properties at minimal weight – a special alchemy emerges. The result is a distinct combination of power, energy, and dampness that rivals front-side oriented skis at classic touring weights.'