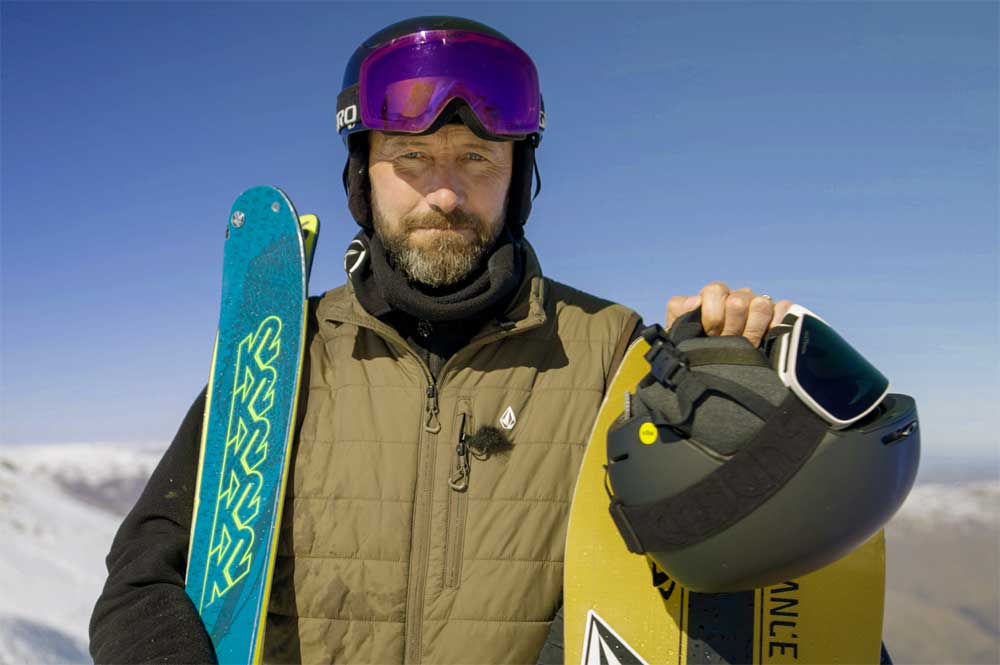 Gearing Up for Ski Sunday

On the snow for 150 days a year, you'd think that Ski Sunday presenter, Ed Leigh would have a whole trailer for his snowboard gear. But, as he tells STYLE ALTITUDE, he has worn the same snowboard pants for two and a half seasons, always needs new goggles - and will be recycling his old gear on eBay...

How important is it to wear the latest ski/snowboard wear to present Ski Sunday?

Not at all. Having two or three jackets could be called vanity and to a degree it is, so I try not to have more than one pair of pants and two jackets. One is super high spec for days when the elements are really challenging, the other is something lighter for spring park laps.

I’m on the mountain for nearly half the year

I live in New Zealand, so I do back-to back-winters, meaning I’m on the mountain for nearly half the year, which is why I think of my apparel the way most people think about a suit, you need more than one. That said, I’ve had the same pair of snowboard pants for two and half seasons now!

How many snowboard jackets do you own?

Right now one! I seem to collect insulators though, I’m a skinny person and I feel the cold, so I’m always on the hunt for a super light, super warm puffer.

Which is your go-to favourite? And why?

I’ve got a Volcom gilet (or body warmer if you grew up in the 80s) that I absolutely love. My pass has lived in it this NZ winter, which is always a good sign that I’ve worn something every day.

What is the oldest item of snowboard wear that you still put on every winter?

My Sorel boots, they are the first thing in my bag wherever I’m going. I spend a lot of time standing around on snow, so they keep my feet warm and when you take your feet out of tight fitting snowboard boots (ok they’re not ski boots) days after day it is one of life’s great pleasures sliding them into a soft, warm and wonderfully comfortable pair of boots. They are my idea of luxury.

A set of goggles, I go through goggle lenses pretty regularly as I’m on snow more than 150 days a year and they are one of the first things to get scratched. I try so hard to look after them, but they always end up getting marked. I’m always testing different brands, but because I like to have a pair of goggles that fit properly with my helmet I’ve gone for Giro’s.

What tech wearables do you snowboard with (e.g. smart watch, GoPro, heated gloves)?

I’m a pretty analogue person in that respect, I don’t even wear headphones! I like not being distracted when I’m on the mountain and being in the moment, so I keep things as simple as possible.

How much do green/sustainable credentials on the label influence what you wear?

Massively, I try to have as little impact as possible, using gear for it’s intended lifespan, looking after it as much as possible.  Wearing apparel made with recycled fabrics that use natural or organic waterproofing methods is a good way of reducing impact. As a family we’ve used the Patagonia Worn Wear initiative a couple of times where they repair your gear for free.  And not just Patagonia gear, you can drop other outerwear apparel with them, and they’ll repair it.

Another thing to consider is apparel rental, if you’re only go for a week or two a year why buy?

Companies like EcoSki have the best, latest gear (with the best environmentally-friendly credentials) that you can rent for a trip, easily, the most sensible and cheapest way to get the most out of gear if you only use it once or twice a year.

There have been huge leaps forward in hardware too with a lot of brands releasing boards and boots that are made with natural materials like basalt rock instead of carbon and castor bean oils and bio resins instead of epoxy and urethanes.

What happens to your old snowboard gear?

If it’s been thrashed then I give it away, if it’s still in decent nick I will sell it and right now that means on #SkiBay4DSUK.

How will selling on eBay benefit Disability Snowsport UK?

This campaign makes so much sense, there is so much old and unused gear lying around in lofts and garages in the UK. People can clear out space, make a little money, reduce the amount of new gear that is manufactured and donate to a charity in one go. That’s pretty incredible, isn’t it?

Can you give us a heads up for anything you're selling that we should bid on?

Unfortunately, as I live in NZ I won’t be selling anything before Christmas, but I will be putting a board up when Ski Sunday starts in early January. Watch my social channels for updates!

Supporters are encouraged to join the conversation and share their eBay listings on social media, using the hashtag #SkiBay4DSUK. Visit www.disabilitysnowsport.org.uk to discover more.