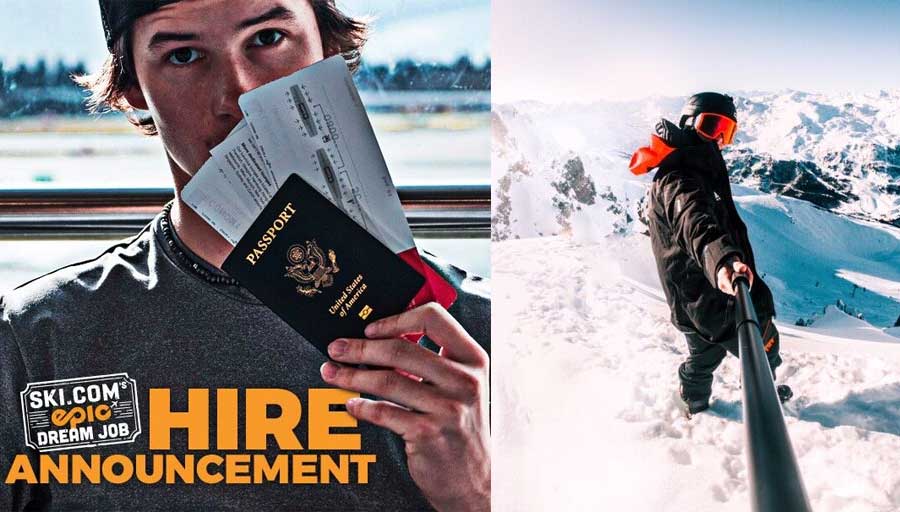 With more than a thousand entries, over 1.8m users of the hashtag #epicdreamjob and a plethora of likes, shares, tweets and media features, has Epic slam-dunked for media victory?

The 'Epic Dream Job' has been dominating Instagram and YouTube in North America  this season, with one lucky videographer landing the plum paid post to ride around resorts in seven countries over three continents.

This ultimate influencer job, setting the tone for Vail Resort's word-of-mouth social media predominance for the winter, was given to a teenager. Over 1100 people applied for the job via Ski.com's 'Ski the Epic Dream' video contest, last October, but it was 19-year-old Jackson Lebsack who wowed the judges.

Lebsack was feeling like 'a kid in a candy store'

Though indisputably young – and a college dropout to boot - Lebsack is not an unschooled rookie. From intensive internet instruction coupled with oodles of innate talent, he's already skilled in photography, videography and filmmaking and, via his company J L Media, has been given lucrative professional commissions in Hawaii, Dubai and Nepal..

Toting a $10,000 salary, an Epic Pass, and gallons of gear - including video equipment from GoPro - lucky Lebsack kicked off the season-of-a-lifetime in Stowe Mountain. Flying around via United Airlines, the scintillating schedule concluded with a fabulous finale in Vail in late Feb. With a Helly Hansen, Rossignol and Oakley winter wardrobe, Lebsack was feeling like 'a kid in a candy store'.

They are all talented social media mavens

Various 'ski buddies' were nominated in November from the best contest applicants, meeting up with Lebsack to help him make the best of his piste pilgrimage. It was no run-of-the-mill mélange of mountain mavericks: they are all talented social media mavens, commandeering the travel traffic with their phenomenal photos, vibrant videos, persuasive posts and blogs.

Yes, they love wintersports – but they are ski bums who've upped the game. Lebsack now has 12.8k Instagram followers and is dedicated to sharing his experiences in 18 of the world's top ski resorts across the media.

As North America's largest mountain vacation package provider and leader in travel tech, Ski.com is also milking the media engendered by the contest. There's the Ski the Epic Dream blog, of course, with Lebsack's photos and film, and regular updates across their multiple social media platforms..They also announced swag bags for the general public, choosing the top picks among photos and videos posted with the hashtag #ToTheMountains. And the original YouTube application post has clocked over 6.6k views.

With Ikon Pass challenging Epic's dominance in downhill domains, this is Vail Resorts' latest move to keep the conversation strictly epic. It's working. Mainstream media is paying attention, with topnotch publications like Travel + Leisure going along for the ride in Europe and Ski Magazine publishing updates on every stop. CBS4 in Denver caught up with Jackson before his trip, too.

The media mentions are mounting

It may not work as well as Hamilton Island's pioneering worldwide social media campaign to fill 'The Best Job in the World' - that one attracted 34,000 applicants from 197 countries, got 8.5 million website visits, reached three billion people, and led to a decade of advertising spin-off estimated at a PR value of US$430million. But the media mentions are mounting: 1.8million usages of the hashtag #epicdreamjob since the launch last September, along with thousands of likes, shares, tweets, and comments about Epic's jammiest job.

Can't wait to see what Ikon's counter move will be in skiing's Game of Zones.

THE SKI PASS RESORTS SCORE BOARD (SO FAR)

The full adult Epic Pass for winter 18/19 started at $899 and offered access to 65 resorts worldwide There is unlimited skiing at Vail, Beaver Creek, Breckenridge, Keystone, Crested Butte and Arapahoe Basin in Colorado; Heavenly, Northstar and Kirkwood in California; Park City in Utah; Whistler Blackcomb in British Columbia, Canada; Stowe, Okemo and Mount Sunapee in the Northeast; Stevens Pass in Washington; Afton Alps, Wilmot Mountain and Mt. Brighton in the Midwest; and Perisher Resort in Australia.

In addition, Epic Pass offers three to seven days of skiing each at Telluride in Colorado; Kicking Horse and Fernie in British Columbia, Canada; Hakuba Valley in Japan (with a total of nine resorts); and several resorts in France, Italy, Switzerland and Austria. There are restrictions and blackout dates for some usage according to the price you paid.

In addition, the Ikon Pass offers seven-day access to Aspen Snowmass in Colorado; Jackson Hole in Wyoming; Big Sky in Montana; Killington, Sugarbush, Sunday River, Sugarloaf, and Loon Mountain in the Northeast; Boyne Highlands in Michigan; The Summit at Snoqualmie in Washington; Taos in New Mexico; Deer Valley, Alta, Snowbird and Brighton in Utah; Revelstoke and Cypress in British Columbia, Canada; SkiBig3 (Banff/Lake Louise) in Alberta, Canada; Thredbo in Australia; and Niseko United in Hokkaido, Japan. There are restrictions and blackout dates for some usage according to the price you paid.