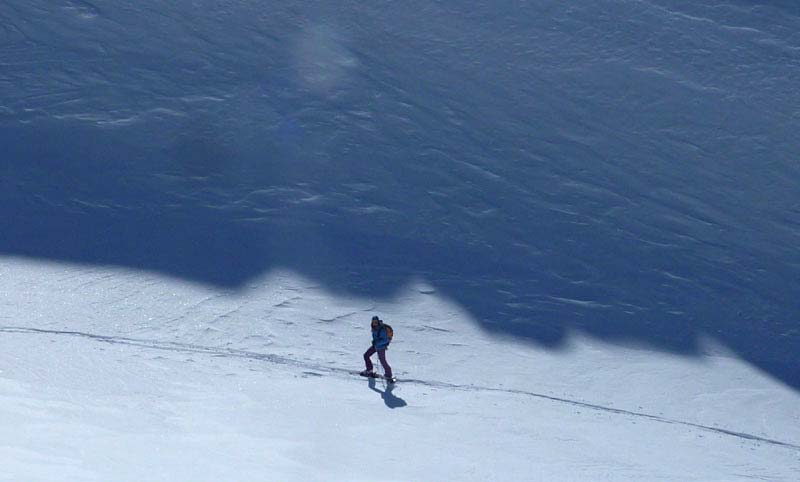 GRAB THE SKINS, TOURING SKIS OR SPLIT BOARD AND HEAD FOR THE QUIETER HILLS. GOING SLACKCOUNTRY OFF THE LIFTS OR BACKCOUNTRY WHERE THE ONLY LIFT IS THE ONE ON YOUR TECH BINDING, OUR CREW EMBARK ON CLASSIC AND NEW ROUTES, REPORT ON CONDITIONS, CAPTURE THE VIEWS AND MAKE FIRST TRACKS.

Galibierr at 2642m is a classic ski tour but on a bluebird day in late February, it's questionable as to whether it'll be powder, wind blown or transform to spring conditions.

Bluebird morning - and the perfectly groomed pistes are buzzing with the last week of the half term holiday makers.

So, as the temperatures are getting warmer, we opted for a ski tour - the first this spring - up the Col du Galibier. It is also a good way to walk the two younger Jack Russells, who love the snow and long trips. On the other side of the Lautaret it's National park, more guaranteed cold powder but dogs not allowed.

We arrived at the parking area beside the road at 8.30am and were ready to go by 8.50am with the two jumping Jacks beside us. After 20 minutes we were overtaken by a ski tourer with his Alsation dog - slightly cheating as he was attached to the dog via a rope to its harness (see pic).. And it was pulling like a carthorse. Hmm, no don't think it would work with the Jacks.

The snow on the way up was suspiciously windblown and crusty - along with a few stashes of cold powder. There was also the potential that the frozen hard pack along with sunshine would transform into spring snow. The final traverse via the snow-covered road was a steep line and hard packed so getting an edge was interesting, to say the least. I made the sky even bluer with a swear or two.

At the top, after two hours, we took the skins off using the convenient Galibier sign marking the 2642m height of the col. We shared a snack with the dogs - and then started the descent. The dogs watched Gavin do a few turns down the steep slope and you could see them think WTF? I think Gavin thought the same when we hit some of the windblown crud.

Anyway we took it in turns (mostly my turn) to wait behind to make sure the Jacks headed the right way. They quickly discovered how much easier it was to go in our tracks - and followed the powder turns (when there was powder). See pic.

We had Cokes and soup at the Col du Lautaret, sharing bread and cheese with the Jacks. They are currently sleeping, mid-afternoon, on the sofa. I might have to join them.

Click on an image to start the gallery up: