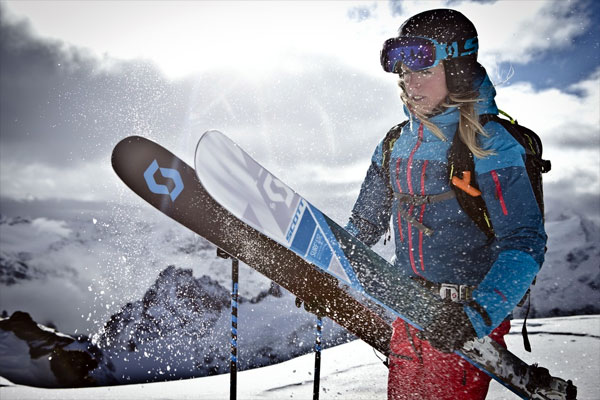 Real men ride pink. Real women ride longer. Real skiers don't care about the colour of their skis or if they're created for guys or girls. Because the lightening up of skis and technical advances in construction have created a cross-over hybrid ski that comes in a wider range of lengths and is completely androgynous. Welcome to the Gender Benders.

The biggest smack in the face for specific gender skis has come from SCOTT. Their women's line for Winter 15/16 has been reduced to just one, the all mountain, Luna. But, hold your banners, if you're a woman and about to burn your sports bra in protest because SCOTT do still have plenty of skis for women, next season.

Their market is not the fluffy, blues-cruising skier

Patronising women by creating shorter, softer, pinker skis is, declare SCOTT, a thing of the past. Their market is not the fluffy, blues-cruising skier who wants a floral patterned ski that screams 'girly girl'. Real women freeriders, their customers, who are advanced or, at least, aspirational intermediates, can ride the shorter main line lengths - and the experts will even go for the longer 178s.

'If we produced a powerful 3L car,' explains SCOTT's UK Sales Manager, Mark Wood, 'It would be an insult to women to expect them to buy the toned-down 2L version just because they are female. It's the same with our skis.'

This is a smack in the face, then, for Jeremy Clarkson

And, just to continue along the car theme for a moment, significantly enough, Aston Martin, has set up a female advisory board to develop a new concept car as women are responsible for 66% of the decisions to buy more new cars in the UK. This is a smack in the face, then, for Jeremy Clarkson, let alone 007.

The Gender Bender ski trend is, in fact, reflecting a wider lifestyle cross-over picture. The London store, Selfridges, recently merged their men's and women's departments over three floors creating what they call their 'Agender' area for six weeks, believing that stereotyping genders is becoming less pronounced in fashion.

Note the avoidance of the word 'unisex'

Like SCOTT, there is a move among the ski brands to refer to a 'main' line rather than a 'men's' one - and, hence, discouraging ski stereotyping. Also, note, the avoidance of the word, 'unisex', a term as dated as Jeremy Clarkson's jeans and a similarly immediate turn off for men or women. 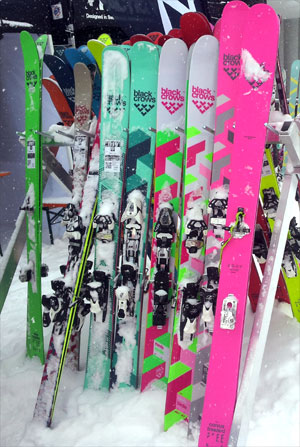 So is gender stereotyping affecting the look of skis, too? What's happening to colours and graphics among the gender benders? One of Black Crow's skis for 15/16 is the Corvus Freebird, lightweight touring ski, with waist 109 and in length 183, it looks macho enough. Except it's in bright Barbie pink (above). A trans gender bender, then.

The best of both gender graphic worlds

Significantly, few of the women's specific skis are quite as all-over girly coloured as the Black Crows. Most are going out of their way to create Gender Bender graphics. So it was a surprise to see that the guys at Armada, who know a thing or two about creating cool graphics, have covered their ARW Park and Pipe girls' ski for next winter with bright flowers on a black background. But, wait a minute, put the two skis together and the flowers make the shape of a gnarly skeleton which is, perhaps, the best of both gender graphic worlds.

They will argue until they are blue in the face

Of course, there are still major ski brands, such as K2 (Remedy 102s, below), Head, Dynastar and Salomon who have substantial women's specific lines. They will argue until they are blue in the face, let alone still slightly pink around the graphics that there is a need for lighter construction, adapted proportions and more forward binding positions according to women's generally perceived anatomical differences and lower Centre of Mass. This is a controversial area especially among more athletically-shaped and aggressive-skiing females, who believe that their bums don't look big or low slung, let alone affect their riding.

But, even the brands with women's lines often stop short of longer lengths and wider waists in the belief that not many women want to go there. Which may be true, compared to men. So, if there's powder to slay, then, for the more advanced female riders, it's definitely 'hello' fatter Gender Benders, because as Katie Penman, in charge of Salomon hardwear in North UK, says, 'On powder days I have no hesitiation in reaching for the wider waist men's line'. 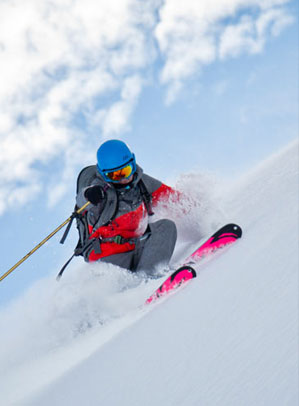 Women can be their own worst enemies

Of course, there is a view in the trade that the women's ski market just isn't big enough to warrant the same sort of ranges as the men's - and, here, women can be their own worst enemies. Especially women who take their skiing less seriously letting their husbands/boyfriends buy all the kit - and being more concerned about the cut of their jacket than the sidecut of their skis.

We all know pro women can ride any guys' skis

Women can, also, be intimidated by skis that they think are too long, too wide, too stiff, too heavy, too guy-orientated. This is where the Gender Bender producers and retailers may have to do some serious marketing and/or gentle persuasion - and, no, this doesn't mean photographing some female pro doing steeps or hucking cliffs . We all know pro women can ride any guys' skis. With their eyes closed. It's the aspirational or advanced woman who needs to be steered towards no, not the 'men's' but the 'main' lines.

With 'light' the buzz word among all the brands for next winter, Gender Benders which come in shorter lengths are most definitely not guy exclusive.

Reversing the concept of Gender Benders

Meanwhile, Mark Taylor, of TKC Sales, UK representative of Nordica skis, is reversing the concept of Gender Benders. Instead of women riding the men's lines he skies the women's Nordicas to check out how their performance. He's six foot - and doesn't bat an eyelid at riding the female specifics.

'The women's Belle range uses the same mould and shapes as the men's Nrgy range but with a super lightweight balsawood core. Really easy to ride but just as powerful,' he says, adding, 'And, yes, I've tested all the women's line and would have no problem buying them. For me, it'd be the 177cm Wild Belle'.