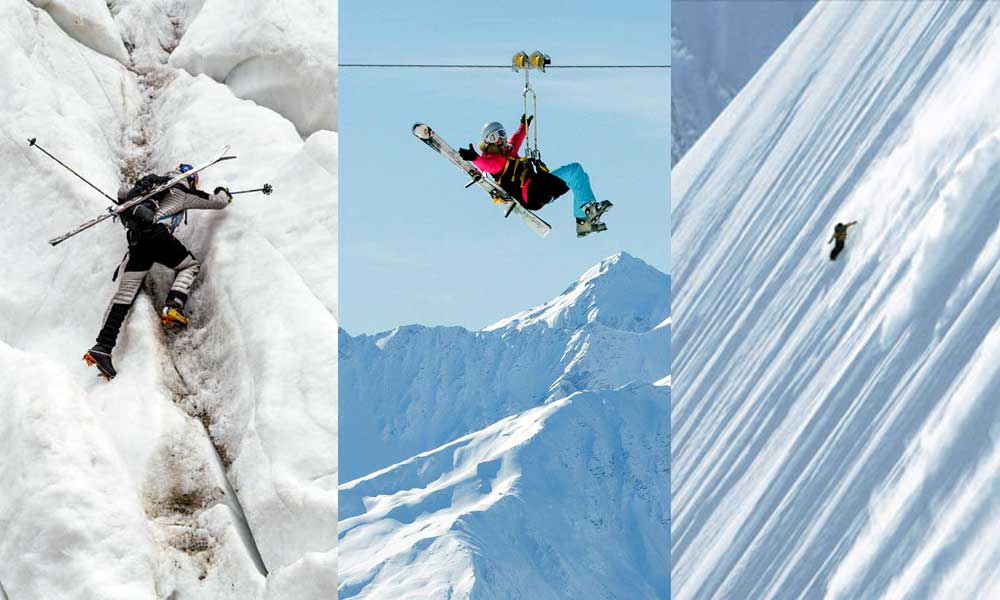 Bear Grylls, Ant Miiddleton, Alex Honnold, Jeremy Jones, they all have one thing in common. Gnarcissism, the obsession with being in the gnar.

It's also thought that a narcissist may feel 'more entitled to things than other people are' and 'act selfishly to gain success'. They may be unwilling or unable 'to acknowledge the feelings or needs of others'. A gnarcissist is similar in that they are completely self-motivated and can be selfish. If you're their friend you'll know that they have their own goals in focus rather than yours. Friend? Well, obviously not on a powder day unless you can keep up.

If you can't go big when with a gnarcissist (and have a camera always ready) then go home.

Think you know - or are - a gnarcissist? Check out these 7 sure signs of gnarcissism...

1. FEARLESS TO A FAULT

One thing the gnarcissist lacks is fear, like a missing gene. Danger is in their DNA. If it were a war you know they'd be the ace bomber, the first soldier over the top, the lone sniper. In peacetime they have to make do with conquering mountains and physical challenges way out of most people's comfort zones. The comfort zone for a gnarcissist is tucking themselves into a sleeping bag designed for polar conditions, clinging onto a narrow ledge over a sheer drop or a self-made igloo on the tip of an iceberg in the Arctic - or should we say, Gnarctic.

Yep, a gnarcissist needs the biggest balls, which doesn't exactly exclude women who can, of course, grow them metaphorically, but it certainly reduces many ardent feminists' desire to join the club.

The gnarcissist is a born leader and has it all mapped out. Literally. Whether it's an epic adventure to the Himalayas or where to ski tour tomorrow morning, the gnarcissist has the map downloaded. They are then single-mindedly locked into the gnar plan. Plans may go spectacularly wrong, but for a gnarcissist this is the very definition of adventure. Sticking with a gnarcissist for adventure, though, is actually your safest bet, especially an older gnarcissist whose senior years count as the most significant sign of their inherent survival instincts in the gnar.

Bossing it for a gnarcissist is not just making that steep couloir look like a green piste but it's also natural for them to boss others. However, you're only allowed to come along on a gnar-adventure IF you can follow their lead AND keep up (so see ya if you can't and it's a powder day). You'll also be dropped quicker than surplus weight in a gnarcissist's backpack if you forget your kit or start to faff (check out how to avoid the faff factor).

A gnarcissist will go where all other men (and women) fear to tread. And preferably be the first one to do it - did we mention a fierce competitive streak?  Neil Armstrong was undoubtedly a gnarcissist. He may have humbly (for a gnarcissist) admitted that his historical stride on the moon was 'a small step for man', but you know it was the FIRST step and he was the one to take it and so a 'giant leap for mankind'. NASA should be renamed GNASA.

4. ALWAYS HAS A WINGMAN OR WINGWOMAN

A gnarcissist has to have a wingman or wingwoman like a pilot needs a co-pilot, someone who can share the journey of their adventures and, most importantly, record them. You are a friend and, also, the Chosen One because you obviously CAN keep up and don't faff. You know the ropes and are always on hand or in constant radio contact to photograph their extreme exploits (from their best side). If you're with a gnarcissist and you don't have a camera at the ready when they're 'dropping', then for a gnarcissist, what's the point of you being there?

Although they often believe in their own superpowers, gnarcissists are only human. They are continually putting themselves in tricky positions (see 1, 2 and 3) and sometimes, yep, they stack it. But a broken bone is a badge of gnar honour. Battle scars are worn with pride. Most painful is the bruised ego from a failed endeavour.

But if as their wingperson you did record a gnarcissist's epic fail, they will be fine with you posting it as it will inevitably be a spectacular wipeout - so long, that is, it isn't  via Jerry of the Day.

Gnarcissists may give the impression that they are too hardcore to care about how they look, but how would they appear so darned hardcore if not by very careful design? Brands are seriously selected according to their gnar-cred. Hence, for backcountry gnar skiers it's a total thumbs up for Elevenate designed by a Swedish freeskier and mountain guide and for Jottnar created by two ex-Royal Marine commandos aka fellow gnarcissists.

Less gnar labels would give their year's marketing budgets for endorsement by a famous gnarcissist, who would rather sell their soul than their gnar image to a bland brand.

A gnarcissist will also always have the latest tech gear such as a Garmin Inreach Mini for summoning rescue when in the remotest gnar gnar land but remember, take away the tech and a true gnarcissist will find their way home guided by the sun and the lichen on the trees.

A gnarcissist is the hero in their extreme universe with their own TV programme like intrepid adventurer Bear Grylls, via nail-biting extreme snowboarding films featuring the one and only Jeremy Jones (main image, right) or starring in their own breathtaking Oscar-winning documentary like gravity-defying rock climber, Alex Honnold or the ultimate ski mountaineer, Andrzej Bargiel (main image left) who was the first to ascend K2 without oxygen, click into his bindings at 8,611m and descend without removing his skis.

Less famous gnarcissists will feature in their own drone vid or action blog for the gratification of a thousand likes when posted on their many social media platforms (social media is like holding a mirror to a gnarcissist's ego).

Still not sure if he/she is a gnarcissist? Just check the screensaver on their laptop. Family? Scenic sunset? Nope, it'll be him or her hanging over a sheer rock face, bivouacking on a mountain summit or shredding bottomless pow.

Is there any more perfect screen saver to gaze at everyday for a gnarcissist than an image of themselves in the gnar?