Skiing with GoPro Max 360 how best to mount, film and ski 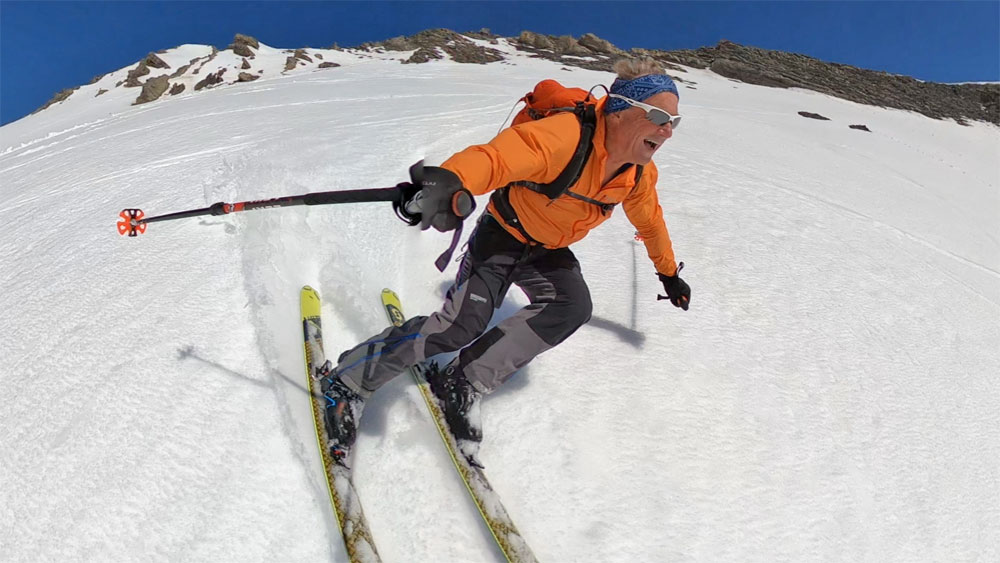 If you're impatient and what to get straight to it then the video below will explain all.

Firstly, the team at Style Altitude are and always will be ski tourers, and that's even when the lifts are running!

This season it seems we've been joined by everyone else, but at the core of our philosophy is to earn our turns and ski untracked when and wherever possible, though again this season that's getting hard to achieve as not only do we have the French holiday hordes to contend with but also Mother Nature, as we're certainly not experiencing the best snow conditions this season so far, be it a dangerous weak layer or Saharan sand!

When ski touring we do find ourselves out in the beauty of the mountains on our own and more often than not with our Rando Chiens, Kiki and Beanie, and for us, the uphill is as good as the down, and that too is worth capturing on film.

I've used a GoPro for around 10 seasons, not only skiing but kitesurfing, windsurfing and for SUP. In fact, we've been filming well before the days of Social Media and YouTube using DV CamCorders and the like.

Twenty years ago we were filming in La Grave & Serre Chevalier and at the time my good friend Simon Bedford produced this 'movie' from the DV cams we filmed with onto DVD's, and a while back I uploaded to Vimeo for posterity, and it still is a good benchmark.

A few years later, I did think the DJI Drone could well be the answer, however, there is a tremendous faff to using one, especially when skiing powder and in trees, and a lost drone in Siberia is testament to that!

In Siberia, I did come across the GoPro's first iteration of a 360, the Fusion, and I was not at all impressed with that.

More on that trip and video here.

And then last season a good friend had an Insta 360 One, great footage but I was not impressed with the editing work flow in order to produce a flat MP4 video.

For me, I like to edit fast, more often than not, producing videos less than a minute long (Instagram friendly) that capture what we did that day.

Before I purchased the GoPro Max 360 I did a fair bit of research, and as ever there are numerous 'Out of the Box' videos and vlogs by presenters with verbal diarrhoea who just like the sound of their voice, and apart from a few, hardly any of them really know how best to use a 360 and would just be better off with an ordinary GoPro Hero.

As part of my research, I wanted to know how easy the editing of a RAW 360 video was in order to produce a video, and chapeau to this guy, Jake Rich who has produced one of the best tutorials that I have come across.

I then needed a RAW 360 GoPro Max 360 file to play around with, and the excellent DC Rainmaker has some you can download here.

I then downloaded (link here) the GoPro Max 360 player for Windows that lets you edit the RAW 360 files and was most impressed, however, the GoPro Max App is pretty damn good for quick edits too!

In my research, I knew that together with the GoPro Max 360 camera I'd also need a stick, as it's the stick that really produces the cool drone type magic of filming by becoming invisible in the edit.

So that's the introduction; how did we get from 'Out of the Box' to this video below?

Unlike many people that might use a 360 / Action Cam we are fortunate in that we can be pretty selective about conditions when we go up the hill and when we do go, we're usually scoring and filming stuff that many people would just like to experience one day in their skiing lifetime let alone most sessions.

And ironically my first real attempt at filming with the GoPro Max that involved skis was not an extreme off-piste sortie but just down on the crosscountry ski trails close to our HQ.

Now crosscountry skiing, especially skate style, as I found out was probably not the best type or skiing to attempt to film with a GoPro Max and Max Grip stick. 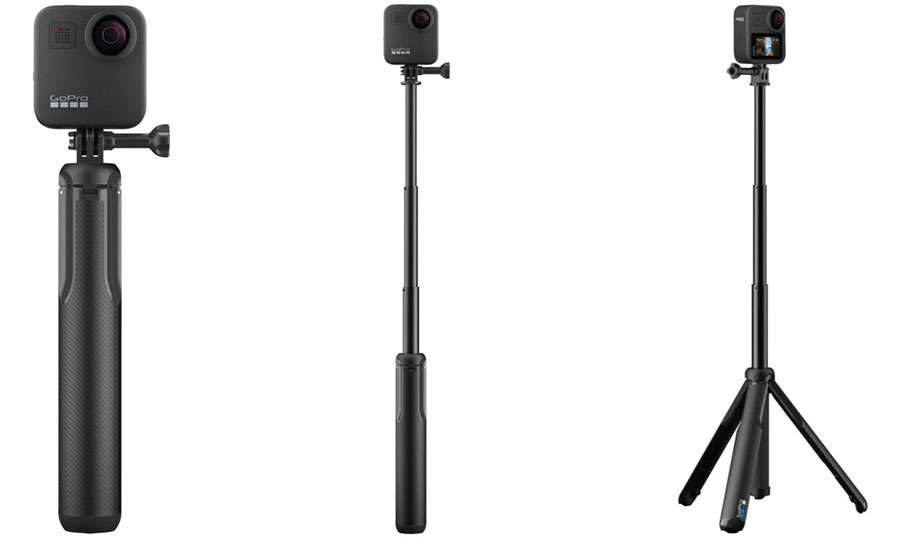 The GoPro Max Grip stick while a very nice engineered piece of kit is just a little too large in diameter to hold next to a tall thin crosscountry skate ski pole which is a lot longer than a normal ski-pole, that said the tripod was brilliant to capture static shots and then edit the RAW 360 in the GoPro Player.

Below is my first film and edit, not too bad a film but pretty damn hopeless as a film to show crosscountry skating technique as I hardly move my arm that has the stick, and that was the first problem that I could see that needed to be solved.

Next film and edit were in the field next to our HQ and again I was no better at knowing what to do with the arm that held the ski pole and stick as you can see.

Next time out I decided that maybe some type of strapping might be called for, so I did not have to worry about holding the pole too much. This attempt was slightly better, except I had set the ISO to the wrong values, but afterwards I searched out both a stick that was lighter and longer.

This is the stick, that can extend to 90cm and seems to be more manageable than the Max Grip stick. 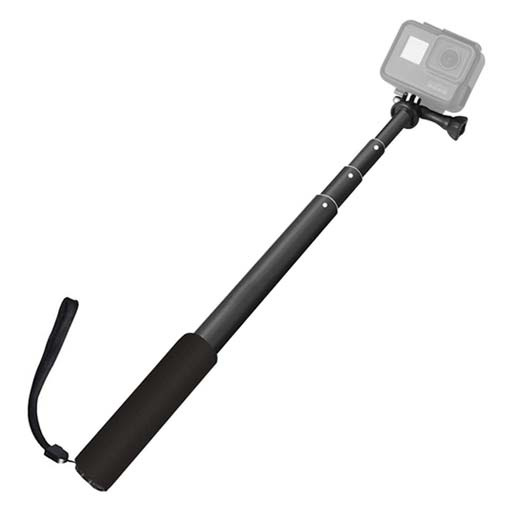 So I was getting there, and now just needed to tweak things so that the set-up would work well out in the field and be the minimum of a faff, which is most important when ski touring.

So this is what I've found works the best on the hill.

This is the stored position, the stick is held to the handle by a strong cable tie and an adjustable bicycle toe-clip strap. 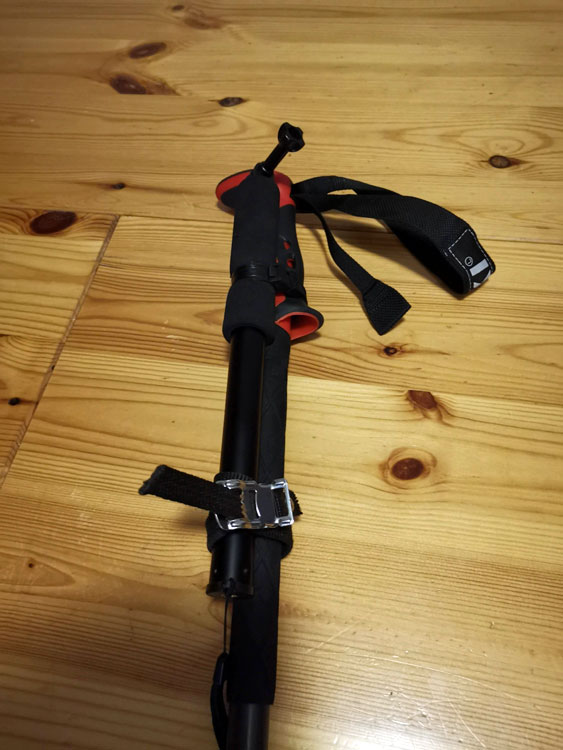 When not filming but just using the ski-pole as normal, I just take the strap off. 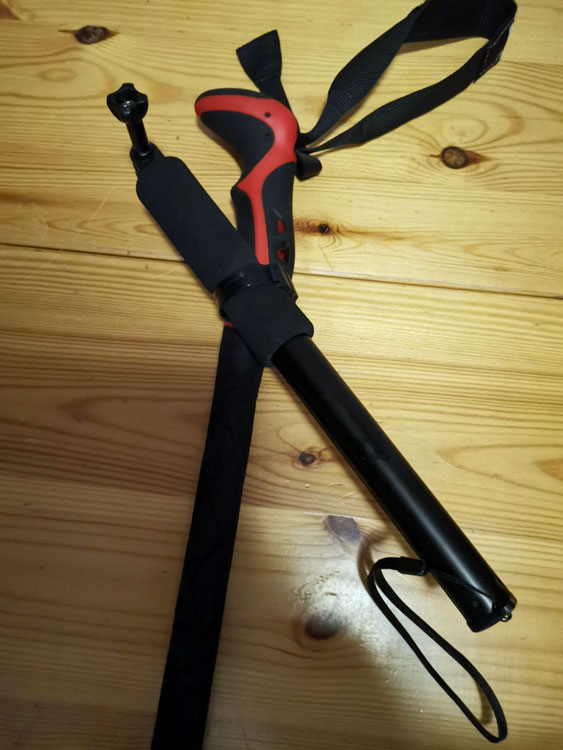 Then for filming, I extend the stick and use the strap to tighten the stick against the ski pole. 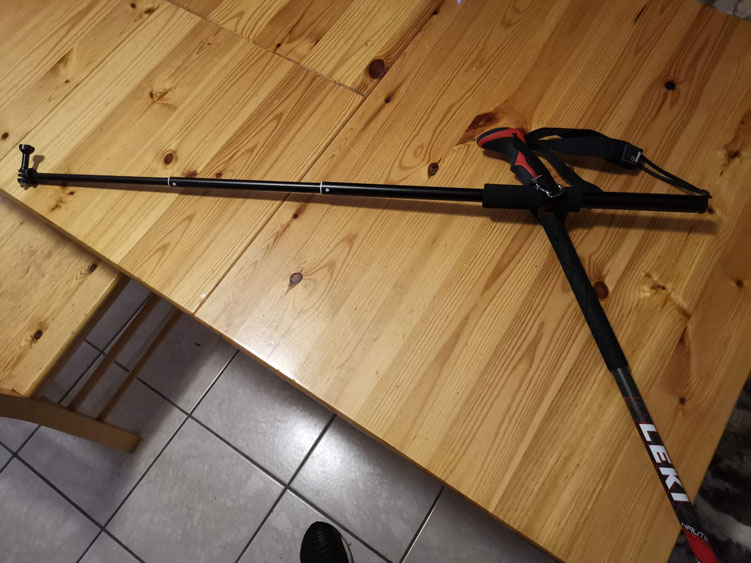 When skiing in tight trees I found that it was less nerve wracking to not have the pole fully extended, but this might well change as I get more use to the GoPro stick on the ski pole. 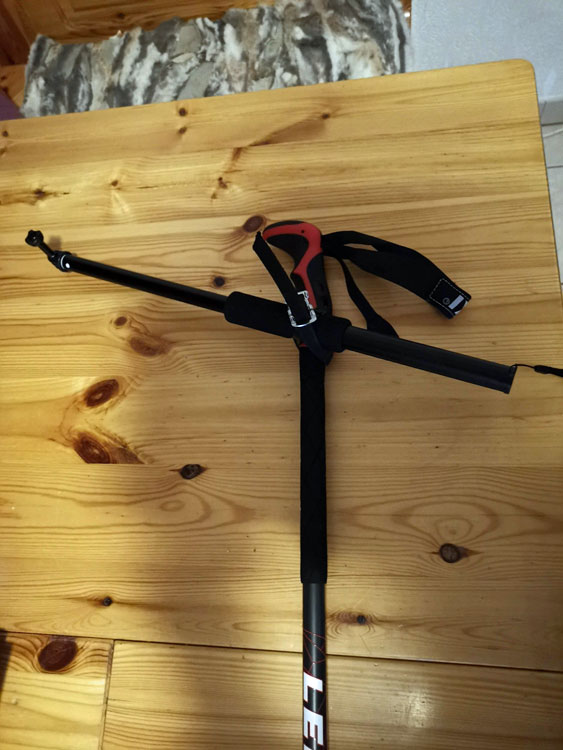 And a word of warning: the beauty of the GoPro Max editing out the stick is done via the software, however, be sure to not use a mount such as the one below, right of the picture as this would position the GoPro at a slight angle and you'd lose that invisible stick.

Also make sure the GoPro is straight on the end of the stick and not at an angle, again for the same reason. 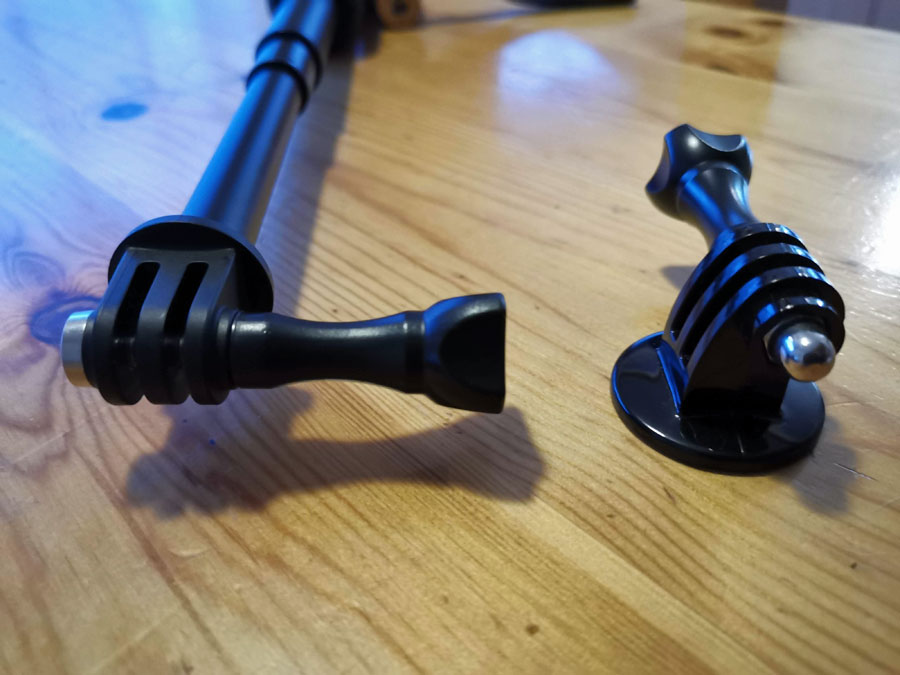 Do you need to adjust your pole and/or technique when filming with a GoPro Max 360?

Now this is something that is continually evolving, and one thing even with an ordinary GoPro Hero if using a chest harness mount is that your pole technique is on show to the whole world, and I must confess to having an annoying flick with my poles.

So on being viewed full frontal, how best to use your poles? One thing to try, which is really hard to do, is almost forget about the stick connected to the pole and try to ski normally.

Now maybe this is where a good wide open piste might come in handy, so you can practise, but there again I suspect that the vast percentage of people who have bought a GoPro Max might not have that luxury on their one week a year ski vacation?

A ski pole is all about balance and timing, it's not a pivot to turn around, if you look at some of the videos above you see that I almost drag the tip in the snow when I'm not using it.

What I have found that with the GoPro on the end of the stick on full extension it does seem to alter the pivotal balance of how I use the pole.

My ski poles are ski touring pole, telescopic so I can alter the length. I've now found that the ski pole that has the stick mounted to it is best reduced in height by up to 20cms and this is something that I am still experimenting with.

In the image below you can just about make out how the right ski pole (dragging in the snow) is much reduced in length compared to the other one. 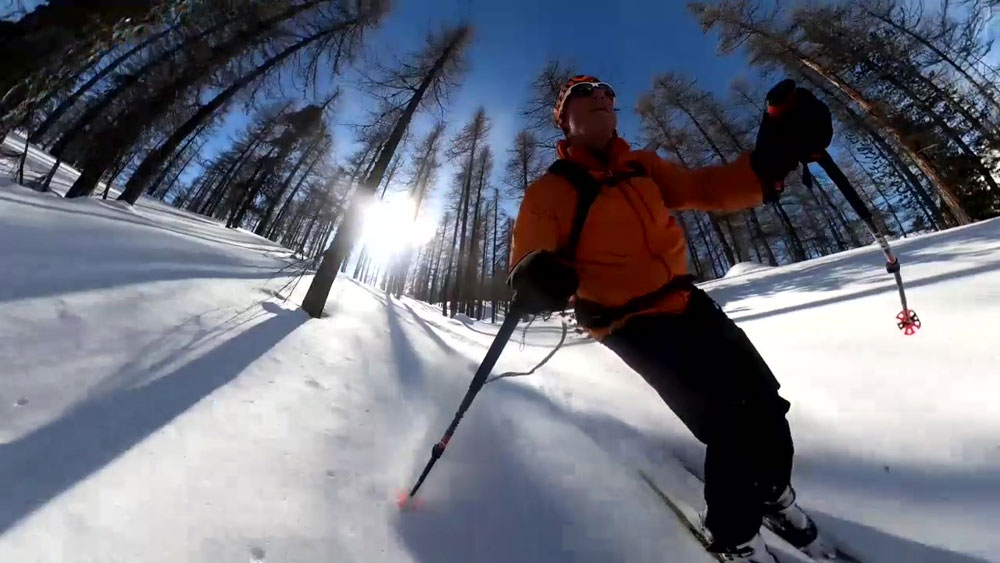 Obviously, the longer the stick results in the edit the better the drone type effect and it's easier to edit to avoid that 360 fish-eye effect. It's all about a compromise in that a shorter stick is not so off-putting to your balance when skiing.

And this is something I'm working on, but when skiing like we do, 90 percent of the time off-piste, the terrain is not so forgiving and you are continually adjusting your position to both the fall-line and snow-pack.

It's so easy but a few people have asked me how best to capture a shot like the one at the very top of the page?

Whilst the GoPro player software does have a facility to extract a frame, I find it far easier to get to the frame you'd like, then "View Full Screen" and the then click Alt PrtScr and open up your image software and paste as a new image, then adjust accordingly.

Mounting in a backpack

I have tried filming with the stick in a backpack but was not at all impressed with the footage.

For those that are sensible and ski in helmets then I know that there are long 'invisible' extensions that you can use with your helmet mounts to achieve similar drone type shots, that's if you don't mind looking like some sort of Narwhal/Unicorn! 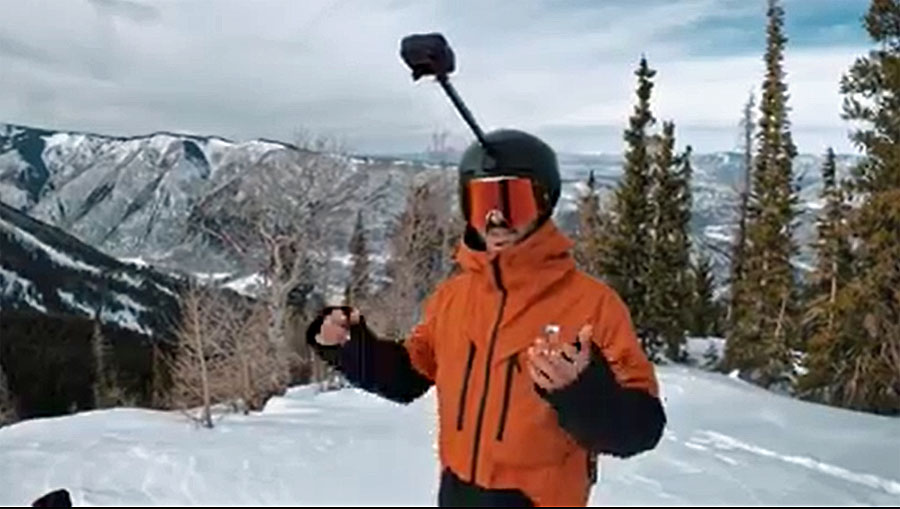 Over the last few days it's been very warm, so as often happens half way through the season it was out on the bike, and a quick spin up to the Col du Lautaret, providing a good opportunity to use the GoPro Max, but this time mounted to my S-Works Roubaix.

Like mounting a stick to a ski pole again I used an old school toe-clip strap, but this time two of them instead of a cable tie. 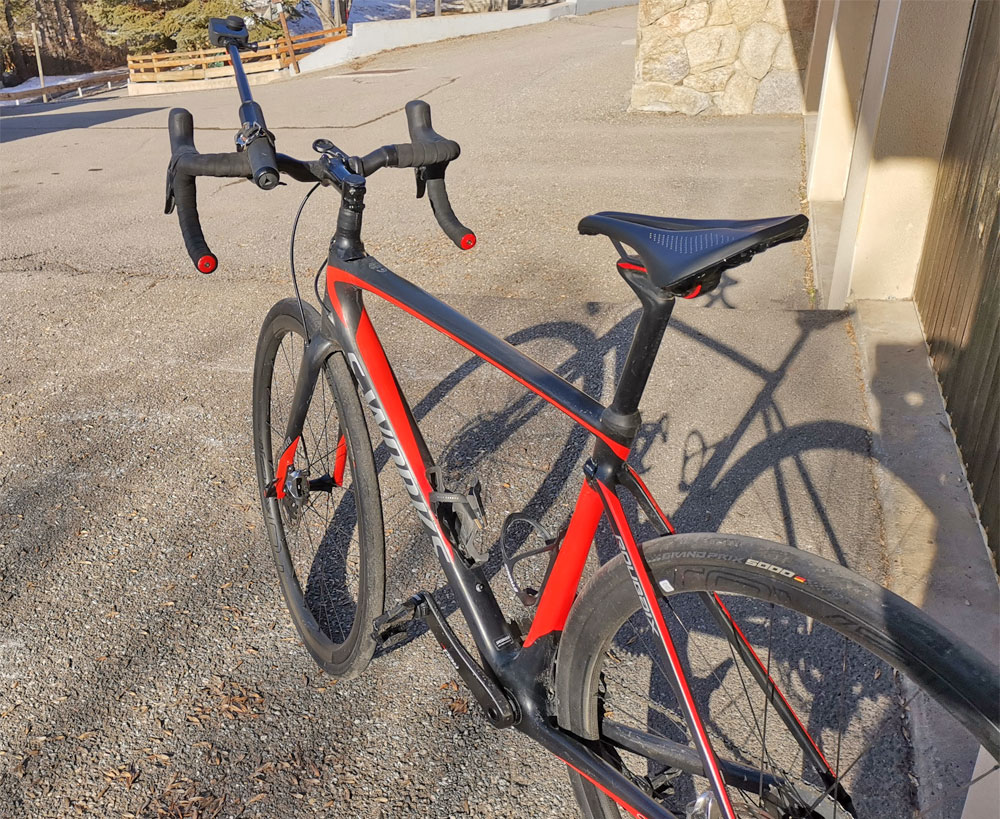 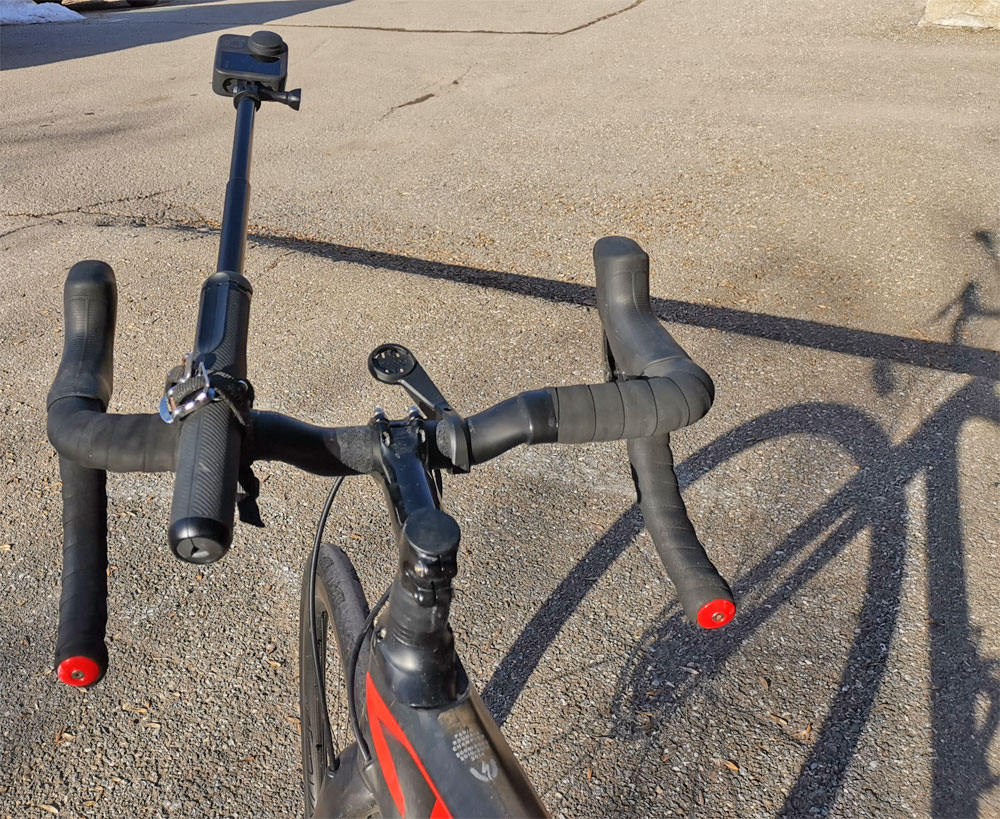 I was really pleased with the edit below, which features a ride up to and then down from the Col du Lautaret, which gives some really good views of the spectacular scenery as you'll see.

If anything the edit production is easier as the bike movement is a lot smoother keeping the subject in the frame and creating long smooth transitions.

And I'm even more pleased with this recent edit, cycling up the Col du Galibier and then a superb descent