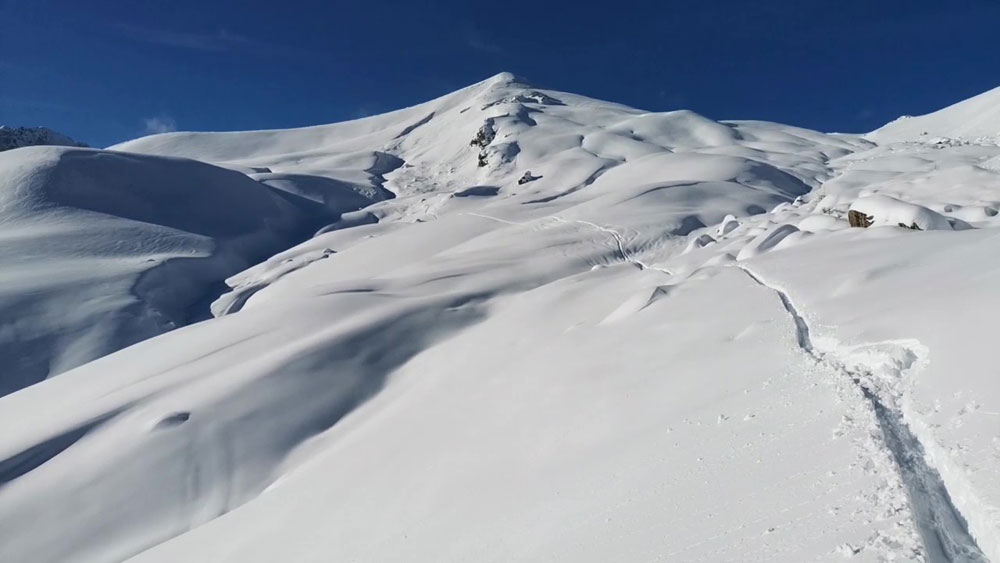 And the first part of the adventure for him was just getting over the Lautaret and then driving and actually finding me to get the keys to the apartment!

As it started to snow on the Thursday, and Stefan was due to arrive later in the evening, I stayed in contact with him, advising him to double-check that his hire vehicle had the necessary snow tyres and or snow-chains as conditions even with snow-tyres could be very hard indeed.

Fortunately it was mid-week, and the Col du Lautaret normally remains open, as the authorities know that most people travelling are locals and have the right equipment and experience; it's at the weekends in High Season that they often close it mid-afternoon onwards, especially in high winds, as all it takes is for one vehicle to have a problem, and it can become gridlock, and then very difficult for the snow ploughs to clear and keep the road open.

And on that point of snow-ploughs.....
Once Stefan left Lyon airport we were keeping in contact, and he made good progress to La Grave, and then 45 mins later he said he was approaching Monetier, so I explained that I would walk down and meet him on the main road, 3km further down from Monetier.

I was amazed at the volume of snow lower down and was literally wading through it, even though it had been cleared by the commune snow-plough it was still Welly deep (that's not a typo).

Once on the main road the snow was a good 15cms, eventually Stefan appeared, explaining that the road from Monetier to us was actually the worst conditions he had encountered so far!

And that's because the Hautes Alpes authorities are responsible for keeping the Col open, so the roads are continually cleared. Once you get near Monetier and the Serre Chevalier Valley it's the responsibility of the local communes, and I think they stop working at around 19:30 hence how much snow was on the road!

We agreed that evening to meet at Monetier, as from experience I knew that the road and parking areas would be open, as while they stop working early evening they are up early clearing everywhere.

So Stefan learnt his first lesson when skiing with seasonaire Brits on a powder morning; if you're not at the agreed meeting place at the designated time then don't expect people to wait around for you :)

So we had a quick run to suss the state of the powder out and then met him back at the bottom.

After a few runs in Monetier we then headed over to Vallons and some dreamy lines on either side of the Cucumelle ridge, with one long traverse and run down in Frejus.

Then it was back to Monetier and a hike along the Crête des Lauzières with a great run down through the forest, and what with the poor snow of last season and Covid, we'd not skied that line for nigh on three years!

With the avy risk still at 4/5 on the Saturday we played it safe, ski-touring up in an area we know well, opting to do two short 550m climbs rather than climb up into more exposed areas, that said there had been fresh avalanches up where we were with the debris sliding down well across our route up, though we were following a track that certainly did not take the normal route and did lead us into terrain that was not ideal, a classic heuristic trap.

So Stefan was very lucky indeed, and on the Sunday, whilst I opted for Cross Country I advised him to keep a look at to see when they open the Yret chair as that would give him access to the classic that is Montagnolle.

A couple of hours later I was skate skiing XC up towards Le Casset passing through Monetier and the bottom of the Bachas lift, and what a surprise who should be there!

Stefan then proudly announced that he'd just skied Montagnolle, almost first tracks, and I have to admit to being a tad envious as like Crête des Lauzières I'd not skied that for three or so years.

I then mentioned that if he were to do it again, at the bottom of Montagnolle, rather than continue to ski the run out back to Monetier, that he could then skin up the Vallons de Grand Tabuc,  and later on he messaged me saying that indeed he did do that, and had another wonderful first tracks down!

So not a bad long weekend for him, and I thought that the next day we could make use of his ski track back up there as he was leaving, but the coincidences continued and as I and another friend were ski-touring up the run-out towards the Vallons who did we bump into having a cheeky skii before he left back to Sweden!