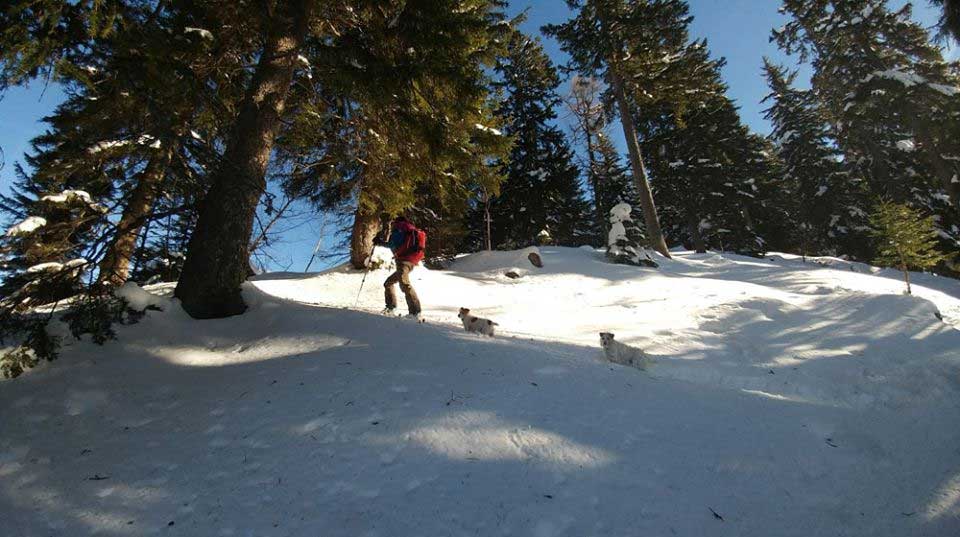 When the snow doesn't come to us, we must go to the snow. So with 75cms fresh in Chamonix we packed the van with fat skis, touring kit and the Rando Chiens...

You know the snow's deep when the Rando Chiens aka the Jack Russells need help when they detour downhill off the touring tracks and can't get back up. Then you go to rescue them and have to wallow up to mid-thigh.

Nononono don't call the RSPCA, the Jacks absolutely love ski touring and 99 percent stay in tracks (follow them on Instagram, the allrightjacks).

Anyway, this is what the snow was like, yesterday, in Chamonix for what was meant to be a social walk on skis with the dogs (we had friends with their Jack related to ours) from Le Bettey to Pierre Blanche and up to the Aiguillette des Houches. While our friends opted for snow shoes (concerned about insurance) and took a leisurely route, for us it turned into quite an extreme ski tour, with Gav using his GPS to navigate through the woods. Fortunately another couple of tourers came past and followed Gav's directions so making first tracks. After quite a few kick turns (I gave up counting) up steeper terrain we made it to the ridge where I just looked at my skis rather than the drop (ok it wasn't exactly sheer but enough to make me want to cry).

Then it was a ski adventure starting with powder tracks at the top followed by combat side-stepping through bushes and a final skid down a narrow path and across a field to the van.

But oh the joy of being back on fat skis and in fresh snow. We had to drive three and a half hours to Chamonix, but it was so worth it after the powder drought currently in Serre Che.

The forecasts were for around 75cms of snow for Chamonix when Gav said let's go for two nights, already on the case with Airbnb. We found a great one bedroom apartment in Les Houches for €60 a night that accepted dogs (the Rando Chiens aka Jack Russells). The only problem, when we arrived at around 6pm, was that it was up a steep slope, slippery from the new snow and we couldn't see the chalet numbers so ended up driving / sliding over a kilometre too far before we could stop to turn around but  hurrah that the van has snow tyres and four wheel drive otherwise it would have been a long walk with our kit.

The next day we headed to Flegere, closed the day before because of all the snow. There was a queue for the cable cabin at 9am - yes a queue and it was a Tuesday out of season but we are talking Chamonix - so it took 45 minutes to get up the mountain, standing shoulder to fat ski with the Chamonix off piste tribe, you know the ones who wear harnesses to look gnar - and that's just in the bars.

But the cable cabin can only squash so many people in making the drip feed of skiers onto the mountain relatively slow. So by the time we were on the chairlift there was still plenty of untracked. But that didn't last long. By mid-morning, there were more skiers and snowboarders in the powder than on the pistes, which were almost empty.

After a quick beer at around 1pm it was back in the van and off to Le Tour, a much quieter area where we still made tracks at 4pm.

So now back in Serre Che where we have 3cms of snow forecast for today - wow!