A Fine Snomance. From Ski Dates to White Weddings 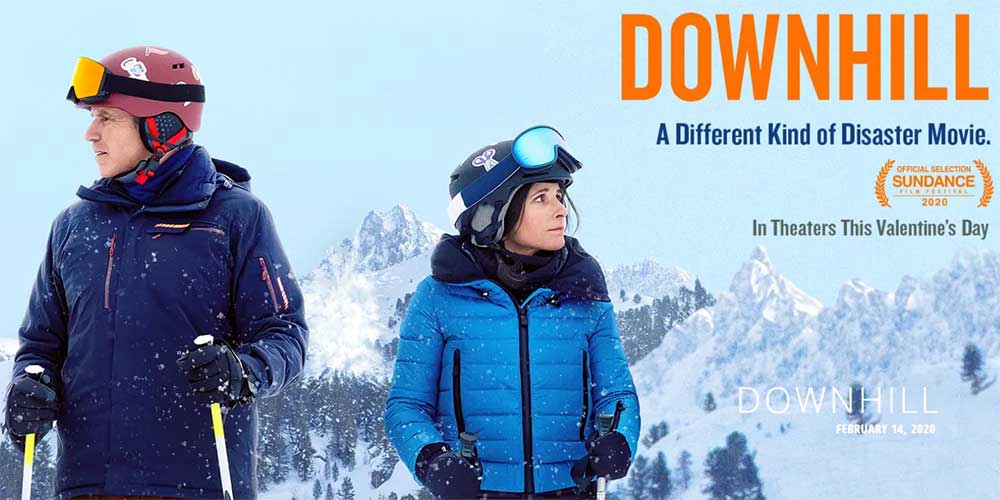 The Hills Are Alive With The Sound of Snomance

How do you find the perfect ski or snowboard partner? On the chairlift? Ski dating app? And then do you ride off into the sunset or, as in the new Will Ferrell film, does it all go downhill? Louise Hudson talks about the pow of love on the mountains..

Forget all those extreme ski vids, it's all about downhill rom coms now. Valentine's Day sees the launch of Will Ferrell's piste partnership with Julia Louis-Dreyfus. Set in the Austrian Alps, Downhill shows the comedic couple trying to rekindle the romance during a fancy family ski holiday, which kicks off with an avalanche of problems.

So, what is it, apart from cosy cabins and hot toddies by roaring fires, that makes skiing and romance the perfect partnership? And how do you find your ski or snowboard soulmate?

App-ropriate Partners: For many wintersports' enthusiasts, skiing can be a vital component in choosing partners or friends in the first place. A non-skier/rider can be a deal breaker. A bit like those blood-type diet advocates who will only pair with the same blood type to streamline meal-making. To facilitate finding a snowsports' soulmate, there are now multiple dedicated dating apps and sites - examples include Fitness Singles, Outdoor Duo and Ski Pals.

Chairlift Chat Ups: Sydney and Rob Dickinson fell in like-minded love in the liftline of Chair 1 at Loveland Ski Area. 'Sydney and her friend Hana asked me if I wanted to ride up the triple chair with them,' says Rob. 'Noting that they were in possession of candy, I said yes'. Must have been eye-candy, too, as they have now skied 12 seasons in Crested Butte and taken many trips together. He proposed at the top of their fave backcountry ski zone on their dating anniversary, she said 'yes' and they skied pow off into the sunset. 'Wait...no... that's not exactly how it went down,' admits Rob, 'Syd dropped in, released a small soft slab avalanche, and lightly hit a tree. I watched awkwardly, hoping she doesn't believe in signs from the universe'. 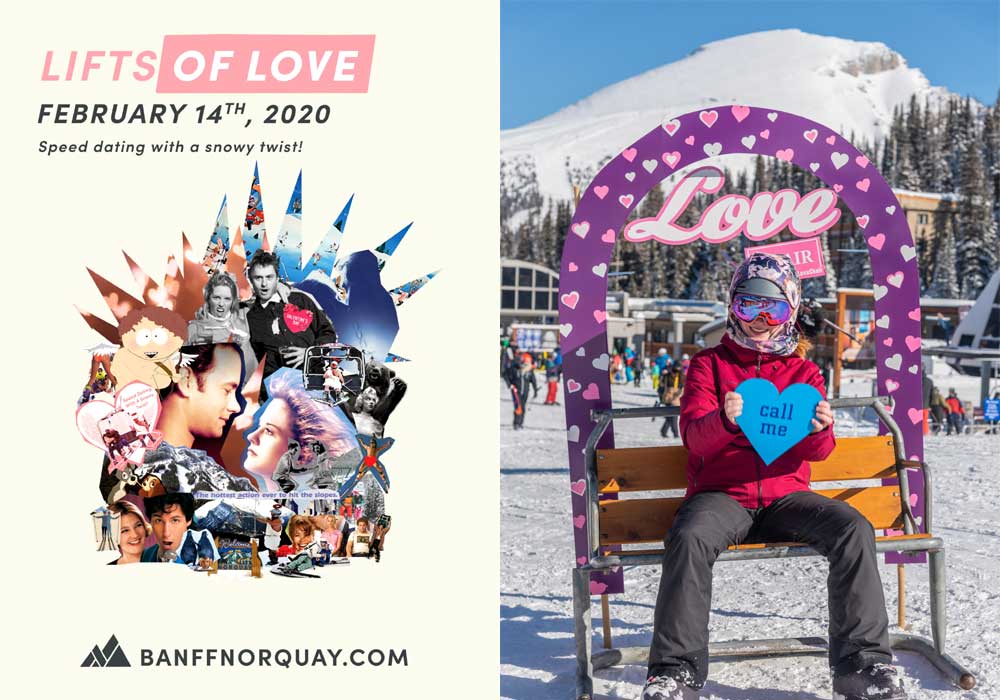 Lifts of Love: Cupid-curated celebrations proliferate slopes all over North America around Valentine's Day. Whitewater, BC has 'Skied Dating' which includes a speedy chairlift date followed by a ski back down to the same lift ready to pair up with the next potential partner. Similarly, Banff Mt Norquay hosts 'Lifts of Love', above left, for those on the lookout for Mr or Ms Right. At nearby Sunshine you can proclaim your passion from the Love Chair #SSVLoveChair. Pics of the pretty pink and purple fake chairlift, above right, are prime for posting on social media either to show off your snow buddy or appeal for a new one with the heart-shaped signs advertising availability.

Winter Weddings: Resorts such as Kicking Horse, Sun Peaks, Aspen, Telluride and Beaver Creek have hosted many a winsome winter wedding, celebrating where a couple first met or honouring the sport that sealed the deal. Snowbasin in Utah just won Best Wedding Venue 2020 in The Knot, a 'by-couples for couples' wedding planning brand and app. Gorgeous mountain scenery and Utah's most opulent lodges perched at 8000 ft in the Wasatch Range lend themselves to fairytale weddings. 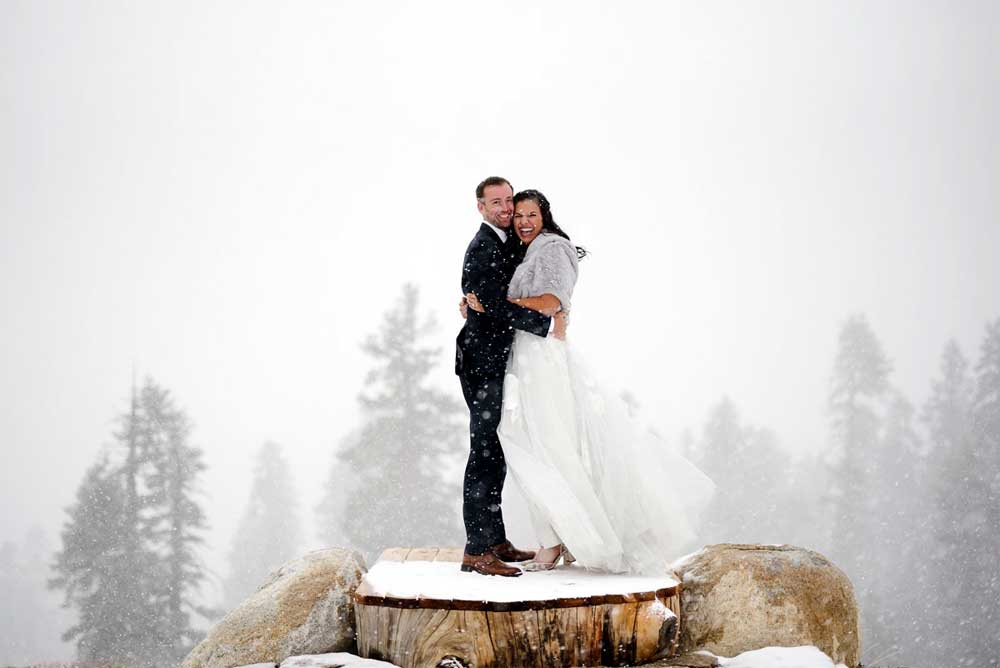 Lovers Leap: On 14th February, 14 couples will say 'I Do' at 8852ft overlooking the Lovers Leap area at Sierra-at-Tahoe (above). Dubbed the 'Great Sierra Elopement', it's a new offering this year in response to demand for winter weddings. For just $100, officials, photos, and a drink are provided by the resort before the couples zoom off on their first lap as a wedded pair.

Ski Together, Stay Together: Skiing and snowboarding are great levellers, bringing families, friends, chairlift pals, and different generations together in an environment of outdoor fun and like-minded appreciation of nature. My hubby Simon and I (below) have been skiing together since 1979, never missing a winter, and we've raised sons on skis. When we decided to rent a condo on the Sun Peaks slopes this season, it brought the prodigal pair back to the nest. So instead of just a Christmas visit, they arrived before us, found jobs, and dug in for the season. 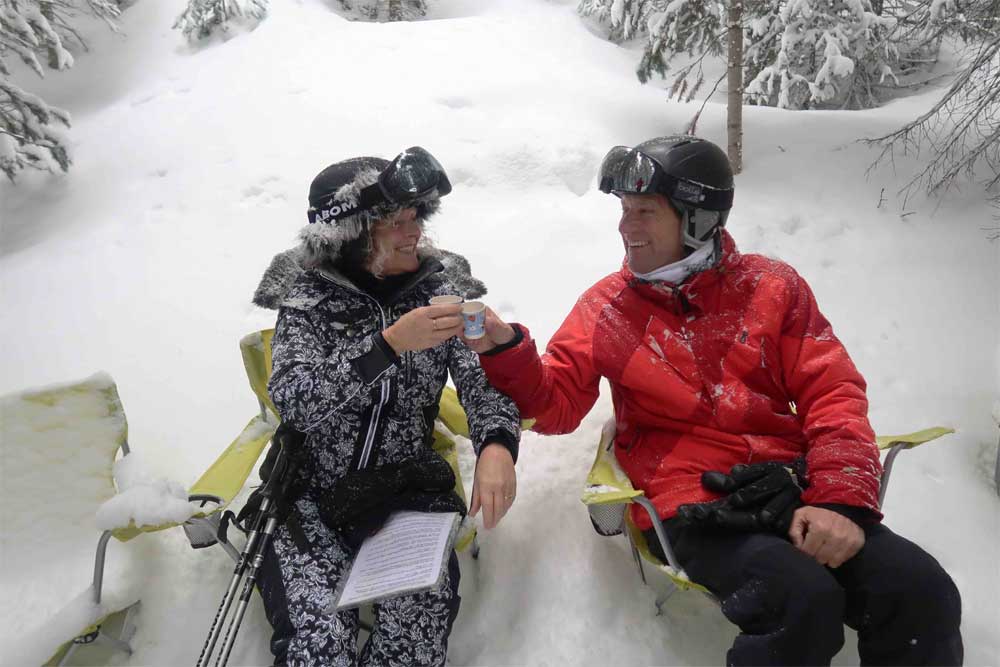 Marital Meltdowns: But not all onhill experiences are so happy and harmonious. There are occasions when a partner or child steadfastly refuses to be taught by their smugly superior spouse or parent. And many a snowboarding buddy has baulked at the routes chosen by the skier. The other day, I saw a hesitant skier stuck on an arduous churned-up powder run, her partner yelling 'encouragement' from way down below. Presuming that he chose the run without looking at the grooming status, I don't think any amount of chocolate-covered strawberries would help in this instance. In all probability, it would take at least a new ski suit from the Patagonia shop to keep him out of the singles line.