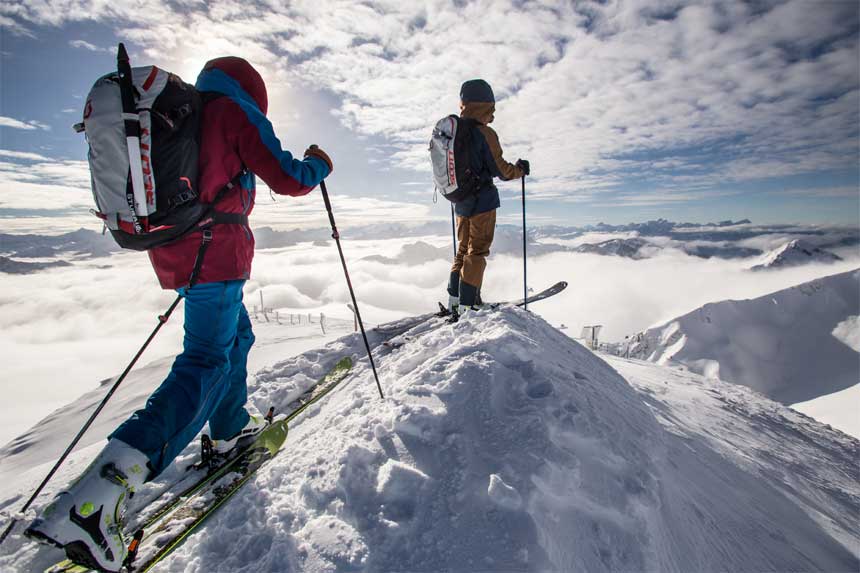 This is our pick of what's game changing for new ski and snowboard gear for Winter 2019. You'll need batteries, bluetooth, iPhone and a screwdriver.

When it comes to Game Changers for Winter 2019 all the significant advances seem to be technical rather than aesthetic. A big thank you, then, to the major brands' ski and snowboard wear design teams - because of your complete lack of innovation and imagination we don't need to buy anything new this winter. Last year's jacket and pants work absolutely fine style and performance wise. So well done, we're saving the planet from our waste skiwear. There's also little that's game changing as far as skis are concerned with most of the ski and snowboard manufacturers honing their lines rather than revolutionising them, this winter. So for this season our Game Changers are all techno accessories - gimmicks, gizmos and gadgets (you choose which) - as in bindings (downhill and touring), goggles, boots, helmet, gloves and safety gear plus the illuminating concept of infrared producing thermals... 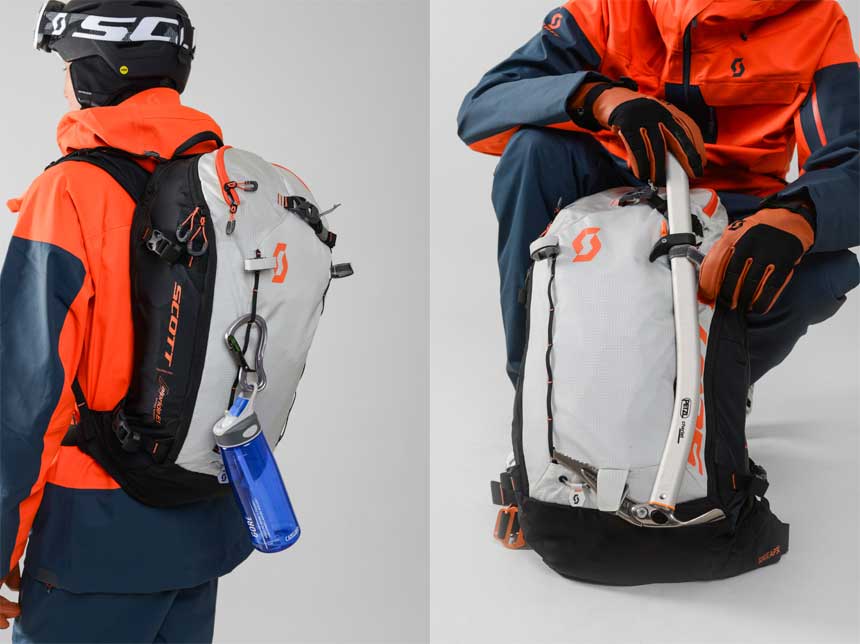 Got your cartridges - and spares? Should you test the system and then have them refilled? Will the airline freak when you want to travel with your airbag?

Chill. With the new ALPRIDE E1 airbag from SCOTT none of the above apply. It's a revolutionary fully electronical avalanche airbag system pushing, leading the next generation of avy bags. Its supercapacitor technology results in one of the lightest electronical airbag systems on the market to date (see above and main image). Price £800. 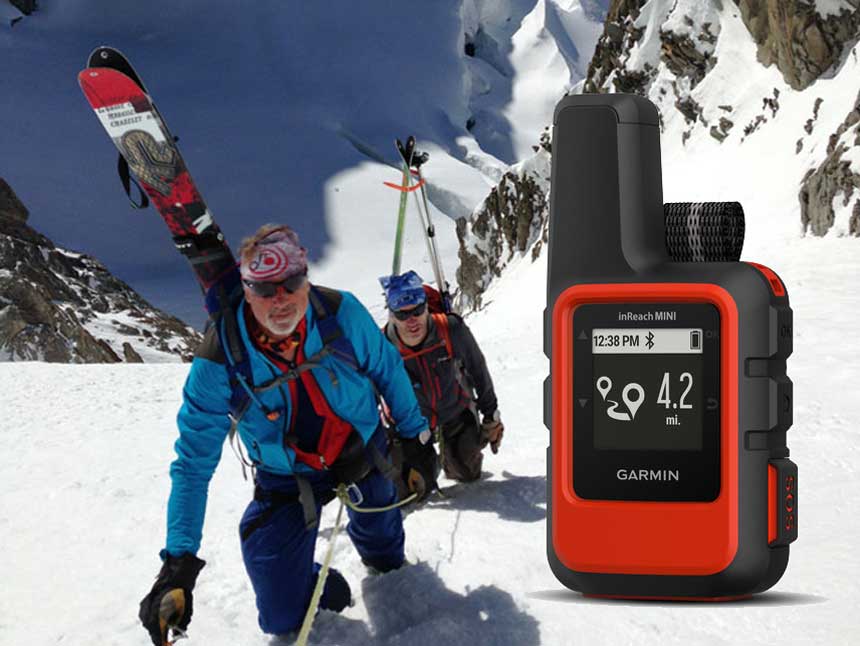 Although enjoying the peace and quiet of being way off grid is why we go skiing or snowboarding in the backcountry, what if something happens and you don't have a phone signal? The thought of being out of signal and out of contact is pretty scary if there's an emergency. So every backcountry skier or snowboarder should have a back-up plan such as the palm-sized INREACH MINI by Garmin, lighter and smaller than a mobile phone and definitely more reliable for SOS.

Garmin launched the INREACH MINI to encompass all, from messaging to tracking to declaring an SOS. It can be used on its own or paired with a compatible device. The Earthmate® app easily pairs with the INREACH MINI via bluetooth to a compatible smartphone for access to unlimited maps, aerial imagery, and US. NOAA charts. The Earthmate app also allows all of the INREACH features to be accessed through the paired mobile device, so a user can reach anyone on their contact list.

Like all inReach devices, the user can hit the SOS button in case of emergency that sends a distress signal to GEOS®, a 24/7 International Emergency Response Coordination Centre. GEOS will track the device which triggered the SOS, notify the proper contacts, and send the necessary emergency responders to the exact location. GEOS will deliver a confirmation that help is on the way and also continually update the user on the status of the response team. GEOS will also reach out to the user’s emergency contact and alert them of the situation.

A not too distressing £299.99 from Global Telesat Communications, plus monthly satellite connectivity fees. 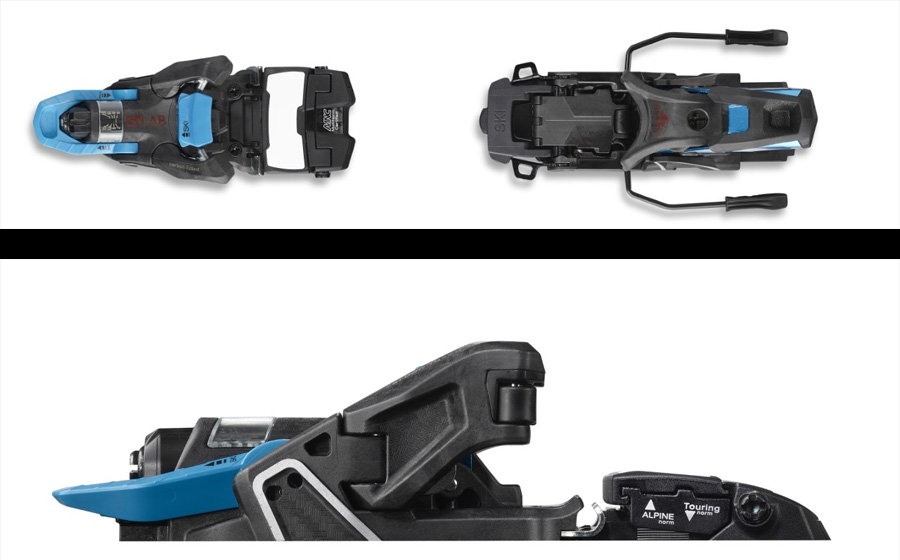 The ski world has been buzzing with the news of Salomon's S/LAB SHIFT binding ushering in the next generation of freeride capability, blending the touring efficiency of a pin (low-tech) binding, with the performance of an alpine freeride binding. Such is the hype surrounding this binding, dubbed the 'Holy' SHIFT by Salomon that, ironically it was like getting hold of the Holy Grail early in the season with press demos few and far between - and let's face it who's going to test it, take it off their skis, leaving holes and give it back?

'SHIFT', though, is certainly what they're expected to do once they hit the shops and online retailers, hailed 'as the first truly compromise-free solution for skiers, blending the freedom and touring efficiency of a pin binding with the power and transmission of a Salomon Alpine binding'. With MultiNorm Certification (MNC), SHIFT is the only hybrid binding that is compatible with all norm boots on the market (from traditional alpine boots to touring boots). The SHIFT is also TUV-certified, delivering the safety a skier needs regardless of the type of ski boot he/she uses.

We note, though, that on their specs, the weight of skier is 66-125kg with the DIN setting on the S/LAB SHIFT ranging from 6-13.so, maybe, it's not such a totally compromise-free solution seeing as it precludes freeride women under 66kg who don't want to ride with their bindings cranked up.

At 1.7 kg per pair (3.7 lbs), the SHIFT’s combination of carbon-infused PA, steel and aluminum delivers a reliable construction. This is the first time carbon-infused PA has been used in alpine bindings, which helped achieve the strength-to-weight ratio needed in the SHIFT for both touring and descending.

4) BURTON'S STEP ON BOARD BINDINGS 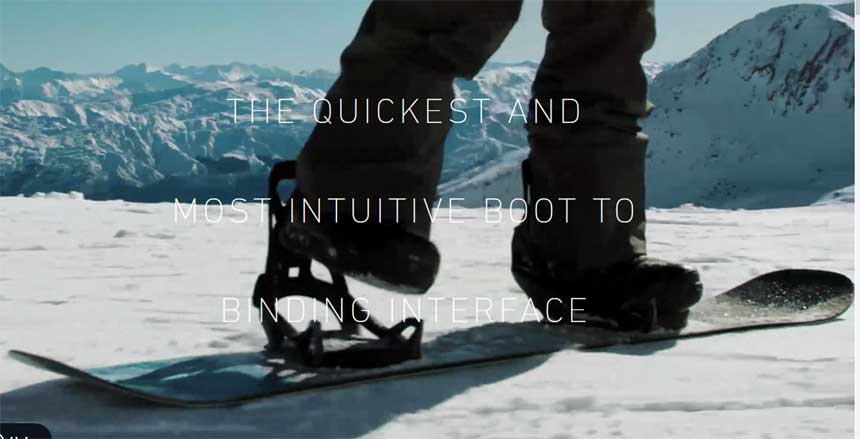 For sideways riders, there's also some bindings news, the Step On from Burton. Anyone remember Clickers from K2? These were more step in than step on but the same principle - and apparently Clickers are still out there, updated and available from K2. But they come with a whole world of faff when trying to click on board, getting that tiny toe hook on your boot into its slot in deep pow.

This time Burton reckon they have it nailed. Their Step On bindings have three connection points - two at the toe and one at the heel - locking your boots securely onto your board. There are no binding straps so, hurray, no sitting in the cold snow or sliding along touching your toes to do them up. Exit via the quick release lever - yep, you will have to bend down for this. Only thing is, as with Clickers, you need to buy the boots to go with the bindings so you're looking at £500 plus but, hey, a reasonable price to pay for this small step on for man (or woman) but arguably a giant leap sideways for mankind. 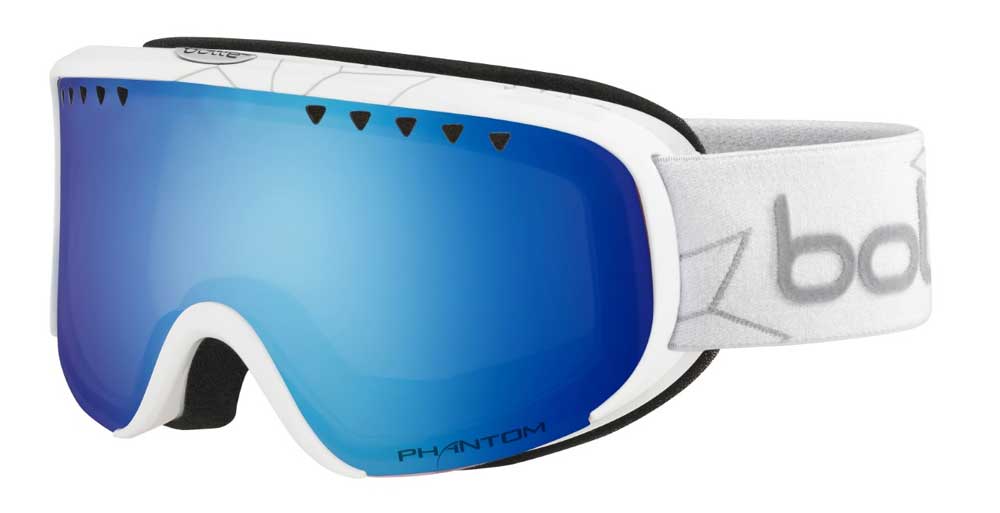 Low vis goggles today? Or high vis? Take both maybe as it could be cloudy later or pack the changeable lenses?  Nowy ou only need one pair with Bollé's latest goggles, The Scarlett, a  revolutionary lens,PHANTOM+ which features four advanced lens technologies, redefining vision on snow.

Or go techno vision but at the touch of button with the new ELECTRON goggles, the lastest from Electric of California. These advanced LED technology battery-powered goggles change lens visiblility via a button control, which you can do even with your snowboard mitts on. Easier, then, than fiddling with changing lenses even though your eyes may water at the €380 price tag. 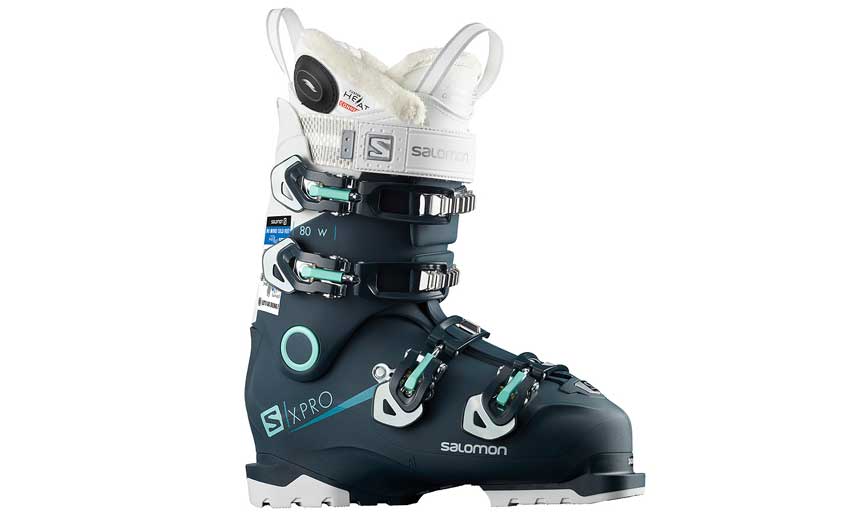 So you've tried extra socks (and got blisters), foot warmers (which have gone cold), what are you going to do now if you suffer from cold feet while dangling your feet from the chairlift? Salomon have the solution. X PRO 80W with the Custom Heat Connect system. Feet getting chilly? Heat them up quickly by adjusting the temperature of the integrated boot-warmer via bluetooth from your mobile device. Around £440. Maybe take along a portable mobile phone charger... 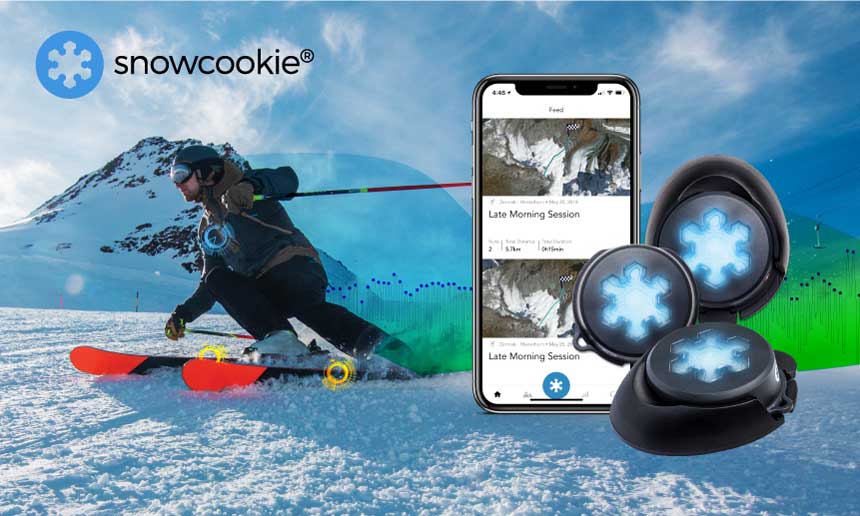 Check out your skiing style with Snowcookie, a smart ski system to show - and help improve - your skiing technique. Oreo-sized devices are worn on the chest and on each ski tracking the motion as you ski via automatic connection to an iPhone app that precisely measures dozens of skiing parameters, anaylysing your carving and body position to deliver insights into your style. Tested by ski pros it's now available to recreational skiers from $349. 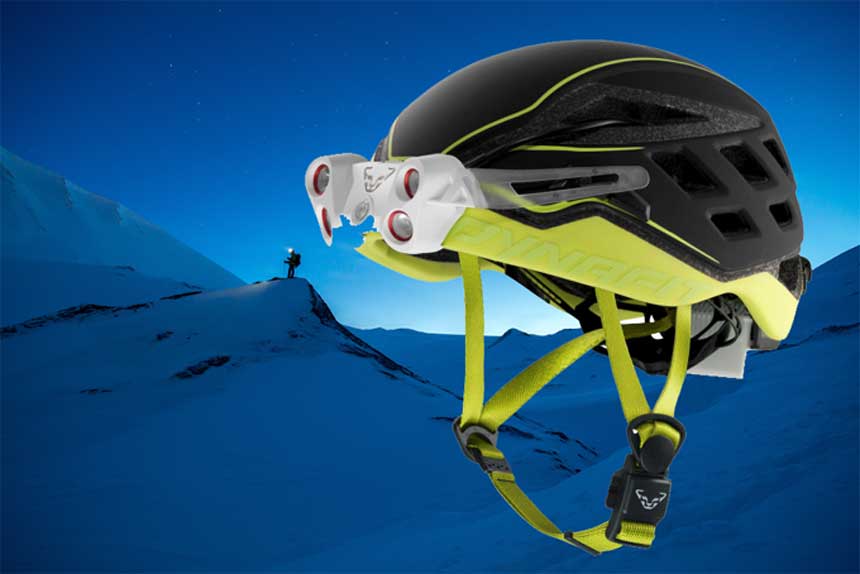 The game has already been changed as far as helmets are concerned. Schumacher's accident was the real game changer even though, yes, he was wearing a helmet. So not so much a game changer more a light bulb moment for ski tourers, the Dynafit Daymaker helmet is for super keen backcountry tourers who set off before the sun rises.  It combines high-tech electronics with minimum weight (390g) and maximum protection. Numerous openings provide steady ventilation for when the sun comes out and turns on the heat. The integrated head lamp consists of four sources that are controlled independently yet can fuse together into one beam and allow four levels of light. The bulbs operate via a battery that can be recharged simply by means of a USB connection.

If the guy next to you starts chatting to his gloves on the chairlift sit tight and don't bail, the chances are he'll be wearing Kju's latest bluetooth interactive gloves that enable you to make and receive calls without getting your smartphone out. With waterproof microphone and speaker, the 2.0 KJUS BLUETOOTH GLOVES have an integrated OLED display, which give a whole new meaning to 'cold call' because you can see who's calling and press 'end' if it's a spam for accident insurance.. £299. 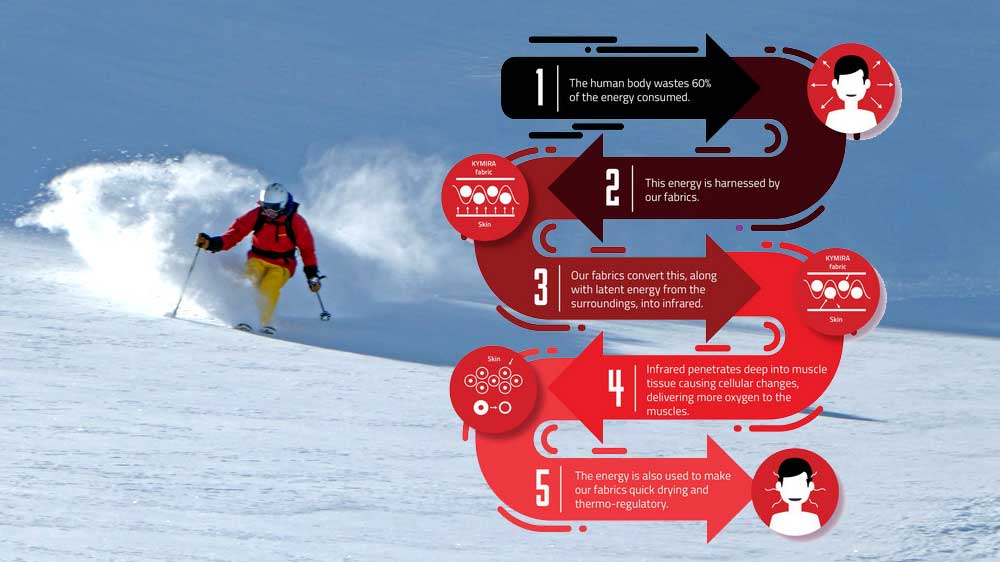 This is the only clothing that qualifies for our Game Changers and, yep, it's because of the technical properties of the sports enhancing base layers and the fact that Kymira Sport works on the principle of creating infrared by exercising thanks to the fabric properties that can then turn it to your body's advantage Who knew?