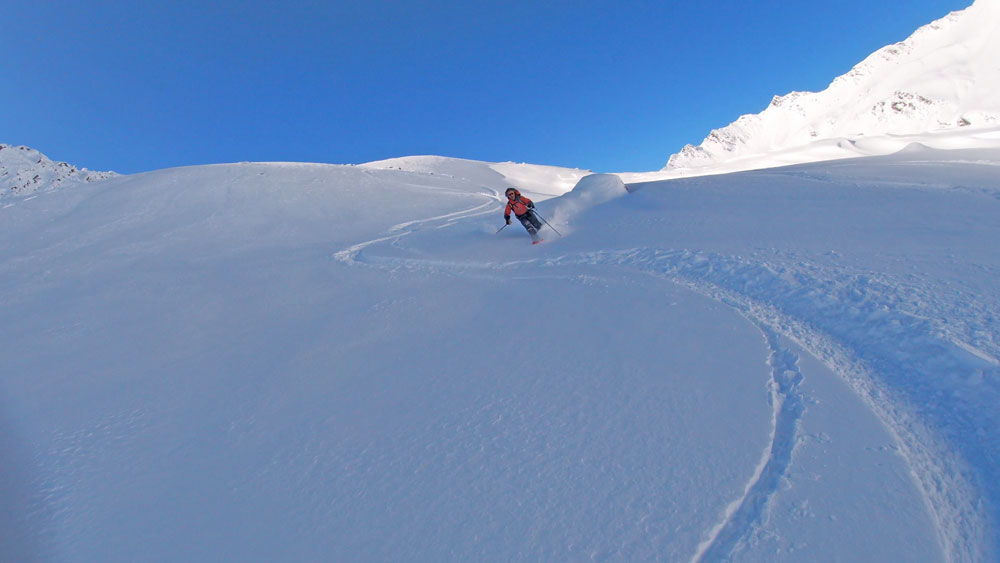 Certainly no complaints, though there was the Shark Attack!

Following on from our first ski tour of the season earlier in the week, the weather again closed in and we had snow in the valley so we waited for the first glimpses of sunshine as per forecast and opted for the Galibier sector.

There must have been around 10 cars at our usual parking spot and as usual, most were heading up the M25 that is the classic route Pic Blanc Galibier.

We opted for heading to the Col du Galibier, which was fine for the first 300m vertical, and then I was breaking trail in heavy sun affected Serre-ment (cement) it seemed, Elaine was behind me and her heart rate was a mild 125 while I was in the mid 150s which just goes to show the increased effort of breaking trail.

We also didn't take the dogs as we thought it might be too tough for them.

There were so many small gulleys from the numerous torrents which had not filled in with snow and some much larger ones made navigating a route more demanding, which was novel as I've never been up there that early in the season. 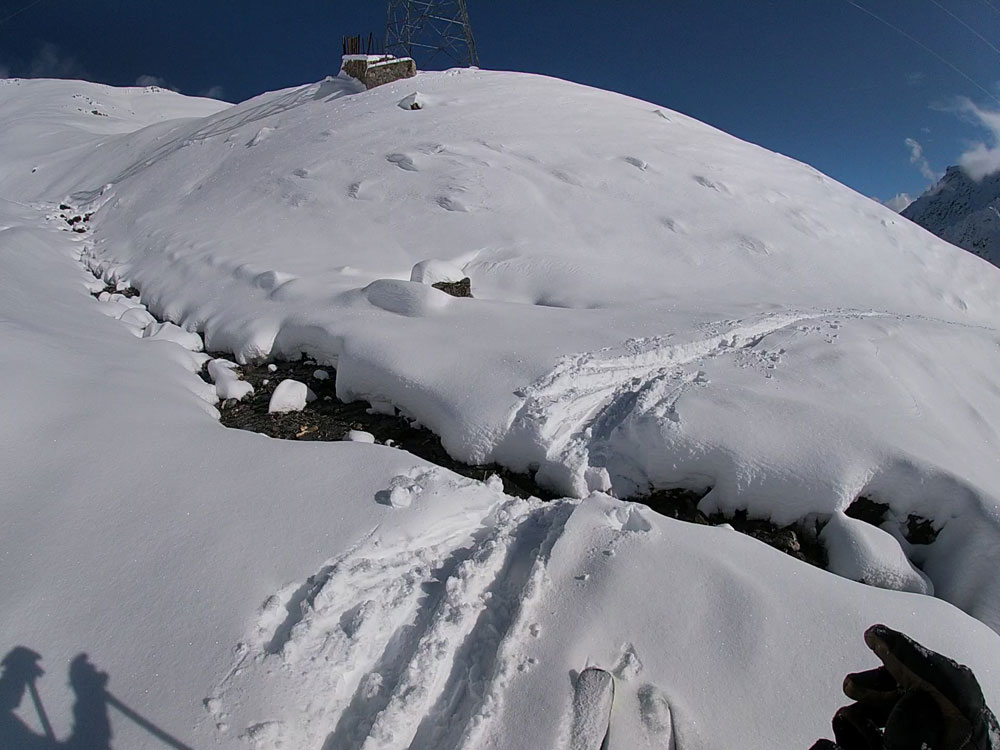 I reckoned at most that there was 50cm max at 2,500m bearing in mind it is south facing hence the many gulleys with water had not frozen as we have not as yet had temps well below zero.

About 150m vertical from the Col a band of cloud rolled in and being quite fecked I used that as the excuse to transition.

Ski back down was fun, dodging obvious rocks and trying to find a snow-sure way over some of the gulleys.

Then the next day, Saturday, it was back up to the same parking area, minus the dogs and minus Elaine (they all wanted a duvet day).

There was me thinking that all the Grenoblois would be in their own part of the world as snow cover in the Belledonne is really good as well, but I could not have been more wrong with ski tourers on nearly all the major routes and some where I'd never seen people tour before. After we finished we drove up to the Lautaret and the parking area was rammed!

That said there's more than enough area to soon be on your own and I was actually quite relieved after an hour or so breaking trail to find a skin track going up from the Galibier road to an area we know well, Crête de Côte Plaine, but usually we take a different route as that gives us other options, but today was about powder and we were after N facing aspects, and the group ahead of us had made a good track. 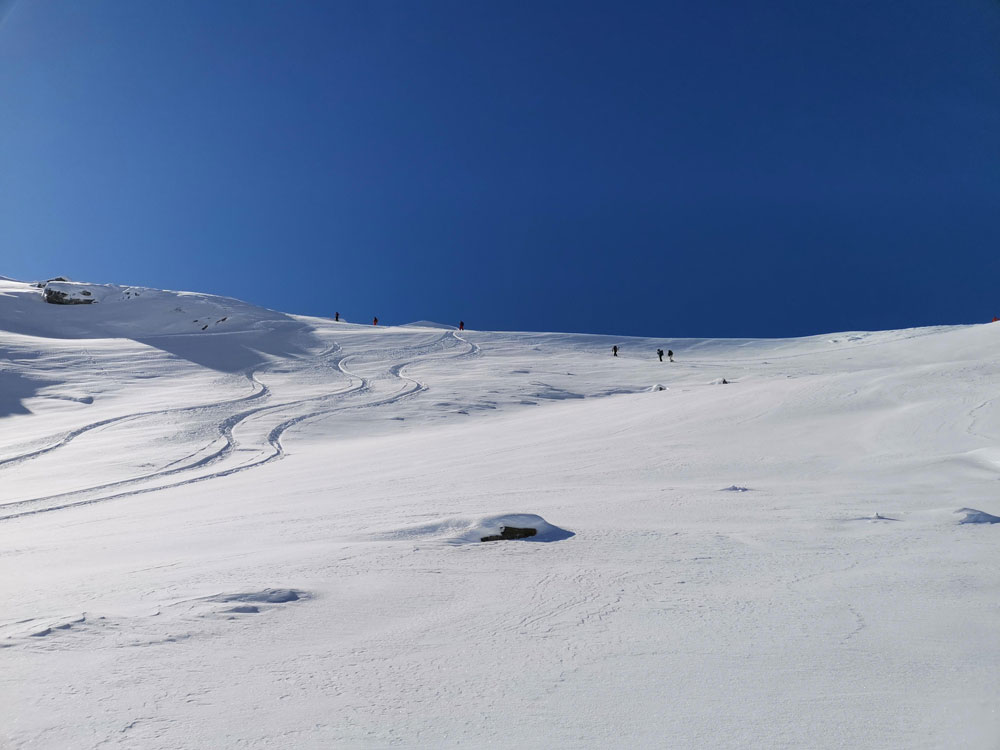 I came across a guy  who lives in Les Deux Alpes and he said that the snowpack here was way better than there, and likewise when transitioning speaking to a woman from Grenoble who said all the buzz was about how good it would be here today.

What was quite handy was that the group of six or so in front of us carried along the ridge leaving us a good area of untracked, plus we were faster to transition.

So I headed off at speed to make the most of the untracked. 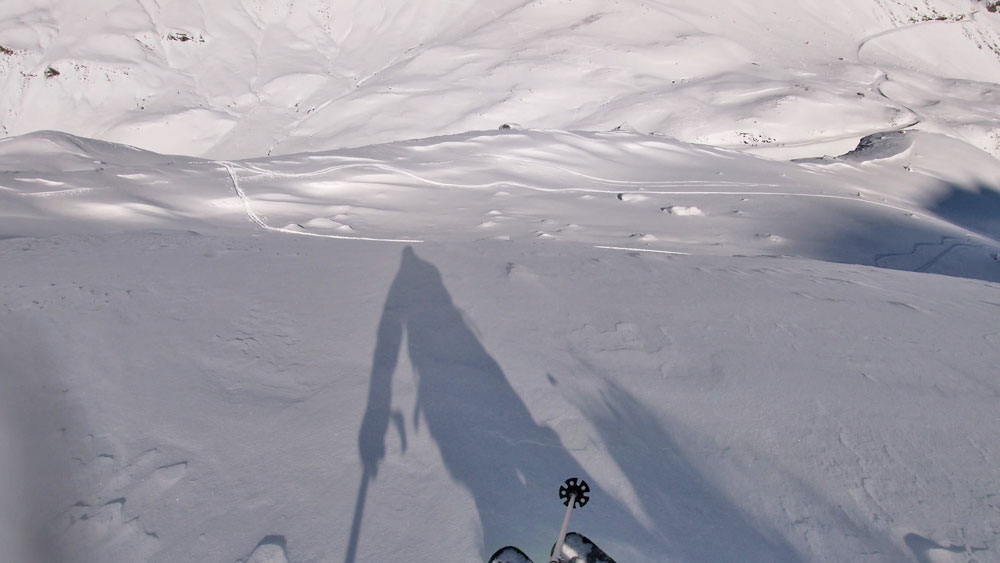 The first-line was really good, and maybe I was skiing it too fast and did not notice the fin of the shark that got me at speed and I went over pretty quick with a resultant big hole to the base in the ski.

All in all a good morning and again no complaints bearing in mind the time of year!