Opening Weekend of The Ski Season in Serre Chevalier 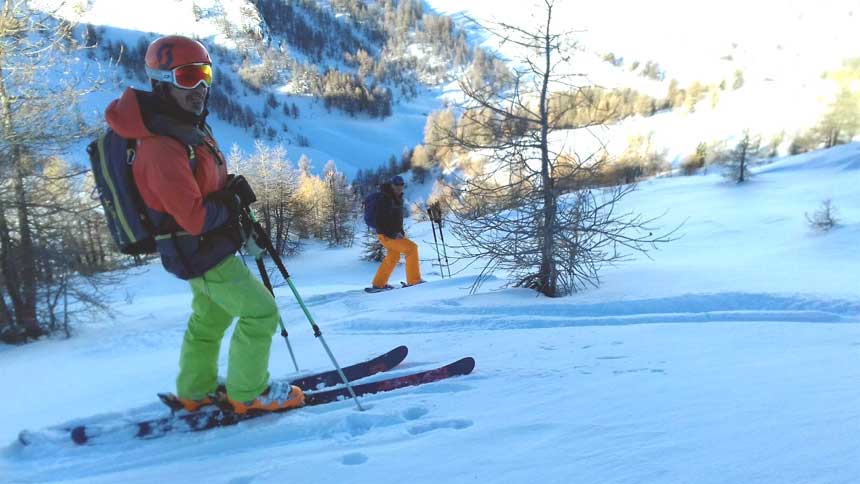 Somehow I stabbed Ken with my ski pole getting on the Foret chair and my ski pole broke against his Superman abs (or maybe his transceiver). They are Black Diamond collapsible poles so by reslotting the broken end and the use of Ducktape (good tip, always have some wrapped about the poles) I had a useable pole again.

Then we had the Aravet part of the resort that was open to ourselves for over an hour, doing the classic sidecountry stashes of powder until it was time to dive over the Villeneuve section for some slackcountry with more untracked and a skin up the closed piste back to the lifts that were working. For me, though, it was a bit of a slide as, yep, I brought the skins for my Scott Realms instead of the Nordica Santa Ana's 110s, a difference width wise of around 20mm. But when it got steep and super slidey, I just boot-packed up as we were on the rutted snow-ploughed piste.

We kept going until around 2pm, dropping back down for a beautiful untracked descent to the Clot Gauthier chair and hiking up again (more boot-packing for me).

Sunday was pretty bleak. By mid-morning it was nuking up the hill but it turned to rain even up at altitude for the afternoon.

But it was a darn good Saturday for side and slackcountry skiing and a pretty sweet start to the season.