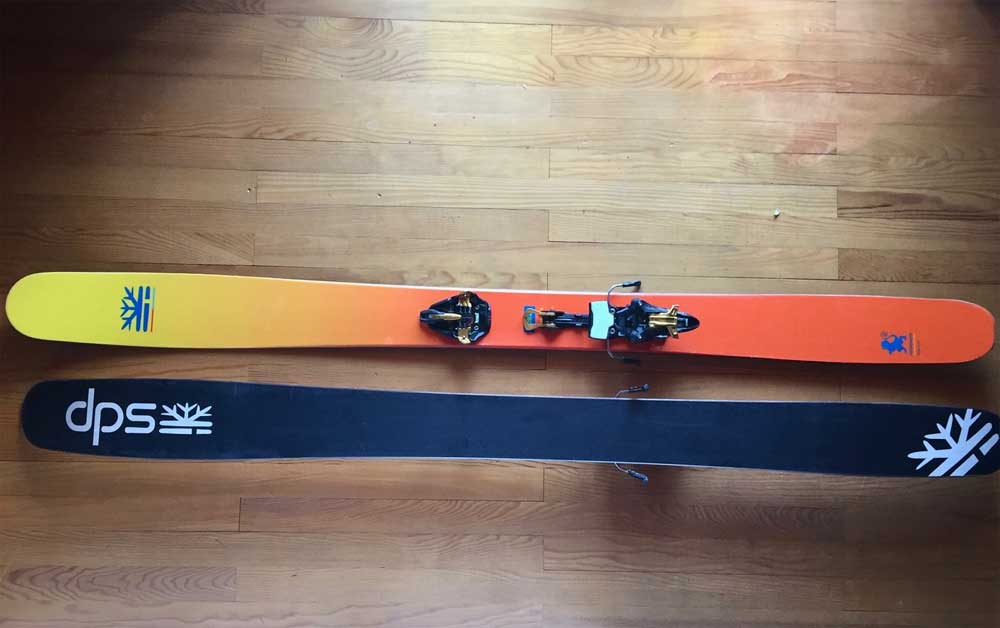 It's the one application wax that lasts for life. How do you apply it and does it actually work as a waxless base for skis or snowboards? Backcountry Editor, Ken Reeve applies the Phantom Glide to his new DPS Wailer 112s and reviews the results after a winter's skiing...

PHANTOM GLIDE WAXLESS BASE BY DPS ON TEST WITH BACKCOUNTRY EDITOR, KEN REEVE

As Backcountry Editor of Style Altitude, I was sent a packet of Phantom Glide waxless base to evaluate over this season.

Phantom’s patent-pending polymer technology aims to offer ultimate convenience combined with great glide performance that never wanes across all snow temperatures and for the life of your skis' or snowboard’s use.

It's basically a wax replacement which soaks into the pores of the P-tex base material and can be serviced/gound with no detriment.

The claim is that it lasts for the life of the ski and you'll never need to wax again. The cost is €100, but that's only 10 or so waxes, so if the claims are true, then it's a no-brainer.

Also, there are always those times when you wished you'd waxed your skis, or got the wrong wax on, which should never happen with Phantom Glide. Plus normal waxing only lasts a few days, so normally it would need doing twice weekly.

The Phantom Glide comes as a 2-part mix, which has to be applied then cured by UV, either in the sun like I did in August, or in a special sun-bed type gismo.

It's easy enough to apply but I had to then wait until winter to try it out.

After spending four months skiing and touring with the Phantom 2.0 base treatment, I’m stoked to report back that it’s been a total success!

From early season cold temps, through super sub-zero Japow and into sunny March, the Phantom performed perfectly, always gliding and once, during a tour, not icing when other skis were.

Zero issues with skin adhesion and the base is still looking black after 30+ days of use, where an untreated base would have turned grey by now.

Every now and then. someone I was skiing with had the perfect wax/base setup and was a little faster on the flats, but this was more luck than judgement methinks!

Totally recommend this and of course it’s environmentally friendly to boot.

Having received my Wailer 112F direct from DPS at the end of last winter it was time to apply the game-changing DPS Phantom 2.0 waxless base treatment. And it happened to be 30C and the middle of last summer, here in Serre Chevalier.

The reason why midsummer is the right time?

Unless you own a DPS cure station (used by Authorised Phantom Installers) the 2-part curing process has to take place in strong natural sunlight and needs several hours all in, so winter's not ideal! However, here in sunny Serre Chevalier, we're fortunate to benefit from 300+ days of sunshine, so mid-summer was the perfect.

First step is to thoroughly clean the bases, I chose a stiff brass base structure brush and base cleaner, a light stone grind in your favourite ski shop also works. Then apply part A and work it in to the base, wipe off any excess after 15 minutes and leave to bake in the sun for a couple of hours. Repeat the brushing and wipe with a damp cloth to remove any residue from the structure in the base in order for part B to fully penetrate and bond with part A to give a life-long impregnation of the Phantom 2.0. Apply part B, wipe off excess once more as before and bake again. Then (tiring all this brushing in 30 degrees heat!) brush out the excess, wipe down again with a damp cloth and done.

The end result looks like a freshly-waxed ski and from all reports this finish should remain, rather than going grey and dry as a waxed ski would after a few days, with the added benefit of never having to wax my skis again!

The International Skating Union will raise the minimum age for competitors in senior events from 15 to 17 after the controversy surrounding Kamila Valieva at the Beijing Olympic Games. click here for more

The British Bobsleigh & Skeleton Association says it is "heartbroken" to hear that Raph Rinaldi is missing presumed dead in the Italian Alps. click here for more

Great Britain are relegated from the Ice Hockey World Championship's elite division after they are beaten 5-3 by Austria on Monday. click here for more