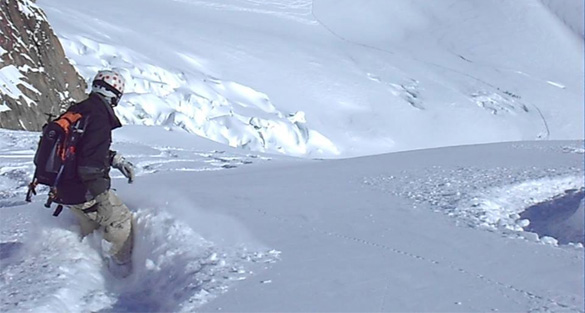 Self-confessed powder junky, Steve Baldwin, author of 'Snow Tales and Powder Trails', captures in words and photos, the life in a day when it snows in his spiritual home of Chamonix.

Deep in a snowstorm, I am surrounded by clouds, and the snowflakes obscure the rocky walls below. For hours, I watch the changing tones of the storm. Sometimes the falling snow becomes less intense, sometimes more - and more than once I see the snowflakes falling upwards, defying gravity, thanks to an updraft of wind from below.

Suddenly, the sky brightens and there is a wide opening in the sky above me. The intense blue of the afternoon sky contrasts with the swirling white of the storm. The clearing widens and reveals an immense ocean of cloud to the west, the top of the clouds just below the level at which I am standing. 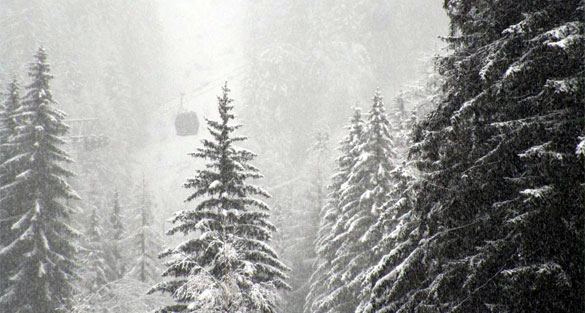 Back down in the valley, if I look out of my window after the sky clears, I can see the towering pointy peaks of the Chamonix valley, far above. After such a potent mid-winter storm, I can wake up and open the curtains onto a glowing white world. The deep shady valley has a softness to it, an atmosphere governed by the foot of fresh snow that fell overnight, covering everything in sight with beautiful fluffy pillows of soft flakes. Every sound is subdued, muffled by these pillows. Cars driving down the street have lost their usual harsh noise, and the light is a pastel shade of blue, created by the brightening blue sky reflecting off the millions of perfect stellar crystals contained within each snow pillow. 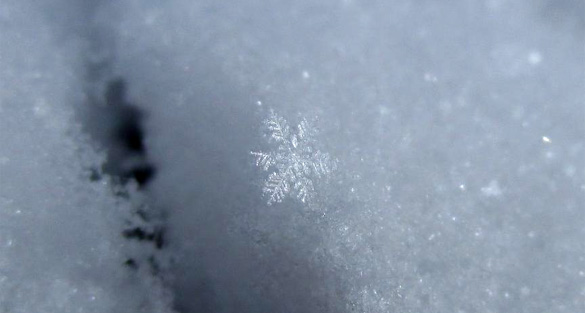 The sun pokes its head over the high mountain ridge and starts to shine brightly on the Brevent ski area. The mountain takes on an almost Alaskan feel, the steep high slopes loaded with fresh powder, just waiting for the touch of a skier's or snowboarder's paintbrush stroke. The quality of the light up there has a bright crispness to it, contrasting nicely with the mellow soft light below. You know that this is going to be a day to write home about!

There is something about freshly fallen powder snow that just screams awesomeness. Even for a non-skier it is a pleasure to put on some big winter boots, go outside and run through deep drifts, kicking up the fluff into shining arcs of sparkly crystals. The crunch of it underfoot is unlike anything else in the world, and the smell of new snow, or even of an incoming snowstorm, is one of the purest, cleanest smells that exists.

For the seasoned powder skier or snowboarder, however, that connection with the crystals goes even deeper, as the very act of gliding over or through the fresh crystals on planks takes the experience to a whole new level. 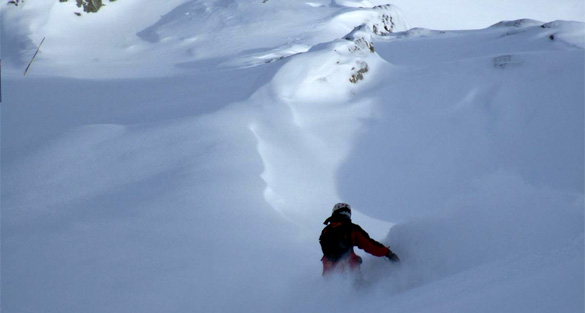 The speed and fluidity of skis or board in powder gives humans a chance to live briefly as a bird in the sky or a dolphin on a wave, the thousands of perfect snowflakes providing a flotation that we can use to glide through space, like flying on a cloud.

Fat skis and powder boards have enabled us to ski faster in powder with more stability, but in bottomless powder even skinny skis float inside the cushion of snowflakes, the displaced spray of crystals fluffing up to the thighs, waist, chest or, sometimes, even hitting the rider in the face with a soft and refreshing caress.

As the sun climbs higher in the sky and shines on more of the white mountains, skiers and riders from all around the valley start to emerge from their warm chalets, eager to get up there and etch their fresh track signatures on the slopes. 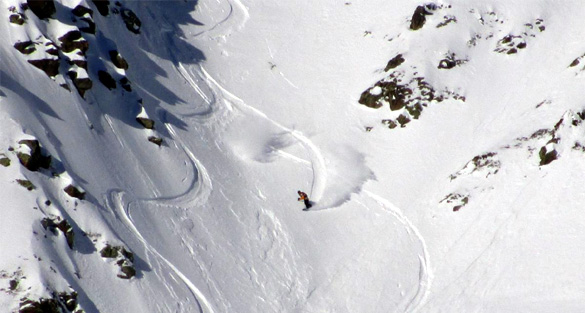 Not every day is a powder day, especially not one quite like this, but those few 'best ever' days and lines that we ride are among the most amazing experiences ever. The more deep powder days that I ski, the more I need. Each one is so different, as each snowstorm and indeed every individual snowflake is unique. I feel the need to get up there every time it snows. Leaving the cold, dark valley behind, I ride up the ski lift to harvest the wrath of nature in the wide open powder fields in the sky.

Up on the mountain, far above the dingy valley, I am propelled into the sunshine by the cable car, surrounded by other powder enthusiasts (junkies?), all eager to score their own fresh track onto the clean mountain's surface.  The air is cool and crisp. All around, the slopes are shining in the sunshine, crystals glistening like a million tiny mirrors in a huge carpet of silk. There are some swathes of clean, soft, well-groomed corduroy pistes, but what attracts the most attention among the crowd are the open fields of untracked powder stretching far above their heads before ending abruptly in sharp steep rock faces and pinnacles, which are beautifully sculpted in three dimensions by the new covering of white snow. 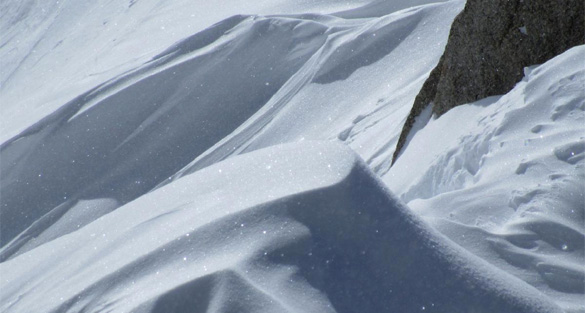 There is a chairlift to ride up before the powderhounds can indulge in the freedom of riding fresh lines and everybody has to wait for a little longer, while ski patrollers control the area with avalanche bombs. There are a couple of explosions and a puff of smoke trails up from a loaded alpine bowl, while a light sluff runs down from a small avalanche crown. Luckily, the latest storm has come in without too much wind and the snowpack is reasonably stable within the controlled ski area.

On the chairlift up, mouths water at the anticipation of what is to come. There are no tracks at all, when suddenly over a rise comes a ski patroller, taking the opportunity to ski powder after a hard morning at work controlling avalanche terrain. She makes a couple of turns in a small pitch of fresh snow before traversing a few metres along a cat-track. She launches off the piste into the air above a steeper pitch and, after a second of air-time, lands in an explosion of fluffy crystals. The snow is so deep that she disappears for a moment - easily the deepest, lightest stuff that I have seen in this particular bowl. Emerging from the cloud of coldsmoke, the patroller makes some fast, fluid, effortless turns before the chairlift occupants are swept higher and lose sight of her. It looks epic. 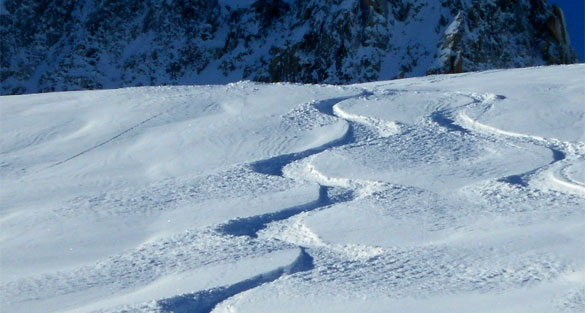 Unloading from the chairlift, the skiers and boarders rush to get ready to drop into the ocean of sparkling diamonds. Some head to the right, some to the left, each with their own line in mind.

The freshly groomed piste that leads from the chairlift across a short flat section is soft and buttery: it is carving at its best. Coming over a blind rollover, the groomer gives way to the wide open powder field seen earlier. As the pitch steepens, the snow gets progressively deeper. A bow-wave of fluff caresses first the rider's shins, then thighs before it gets really steep and deep a few turns later.

The sensation of the bottomless blower powder is incredible, as the super-light crystals go over the rider's head. Flying through the snowpack on a cushion of air is like breaking through into a new dimension, where time slows, and space morphs. The rider connects completely with the snowpack and the mountain, totally grounded with earth and sky, water and ice. For a short time, no longer restricted to three physical dimensions, the snow rider loses all feeling of the solid snow underneath.

Turn after turn through the powder throws flakes high up around the soul surfer, and the steep slope seems to go on forever.

What a week it's been,

The crystal snow took me to the sky,

And we cycled up the valley

To catch my soul.

See more of Steve Baldwin's writing and photos in his book "Snow Tales and Powder Trails', available as a paperback and an e-book. Check out his website for more information and inspiration:'