If it stops snowing in the mountain resorts because of global warming,then what? Grass skiing? Put wheels on your snowboard? Well, if you'd rather have snow, now's the time to join others and slow down climate change.

Together we can move mountains (though, hopefully, it won't come to that!). Protect Our Winters, launched by Jeremy Jones, mobilizing the snow sports community against climate change, has now spread to Europe, opening a branch of POW in the French Alps, this winter. And just in time for one of the sketchiest snow seasons on record. We talk exclusively to Chris Steinkamp, POW (Global) Executive Director and Marita van Oldenborgh, coordinator of POW France

Q. Protect Our Winters launched in France for the first time, this season. Why and why now?

Protect Our Winters has been going from strength to strength in North America ever since it was founded in 2007 by pro snowboarder Jeremy Jones and, more and more lately, people were asking us, why isn’t POW in France, too? So here we are. We are just getting up and running and the response so far has been fantastic. There are, also, POW organisations, by the way, in Austria, Finland (below) and Norway now, so we’re part of a growing movement across Europe and around the world. Climate change knows no borders - and nor do we. 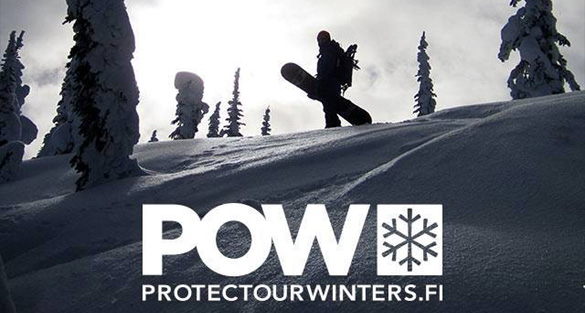 Q. It was a particularly warm start in the Alps, this winter 15/16, with unseasonably high temperatures over Christmas week – and end of January into February. Could it be just one of those occasional warmer winters or is there evidence that this really has everything to do with climate change?

Afraid so. There is plenty of evidence that what we are seeing is climate change happening first hand – that’s why we should be speaking out: those of us who are on the mountains a lot. We’re the canaries in the coal mine, as it were. It’s already been confirmed that 2015 was the warmest year on record and, the thing is, our mountain regions are suffering more than most. The stats make for scary reading: in Chamonix, for example, where they’ve been measuring these things consistently for ages, cumulative snowfall has halved in the past 40 years. Then there are the glaciers: in the Alps, the surface area of glaciers has shrunk by 40% in the last 150 years (see La Mer de Glace, Chamonix, below, with the glacier level shown in 1990) and in the Pyrenees, it’s 80%. Of course, we may get some colder, snowier winters again (let’s hope so), but that doesn’t mean there’s no global warming – more erratic weather is one of the symptoms that the climate is changing. 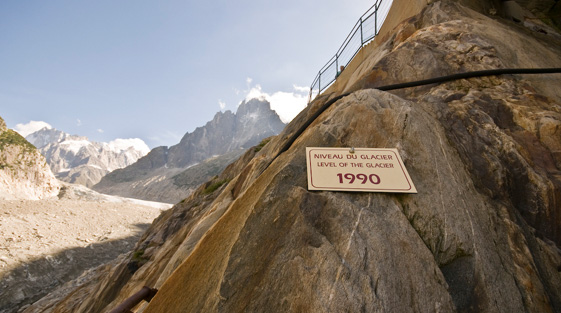 Q. Ski resorts create a significant footprint using energy, running lifts and making artificial snow. Could they become greener and still run efficiently, attracting holiday skiers and boarders? And how easy or hard do you think it would be to persuade them?

Someone told me recently that ski resort lifts in France already use about 70% renewable energy on average, which is pretty cool, if true, but for sure, they can still do better. The ski resort business is a tough one – investing in hybrid snow groomers is expensive, for example, and snow cannons are pretty much a necessity if you want to compete. Also, as the industry is often quick to point out, something like three-quarters of the environmental impact of your average ski holiday comes from travelling to and from the resort. Still, there are loads of opportunities to do better and to make becoming greener a selling point – and some leading resorts are doing that already. We are just getting going in France as I said, but resorts have approached us already and we’re really looking forward to collaborating on some meaningful initiatives.

First off, there are people and organisations and companies in the winter sports community in France who are doing some great stuff already to make a difference. Our focus is on bringing our community together, increasing awareness and raising the voice of all of us who want to protect these wild winter playgrounds, so it is heard at the highest levels. We have some awesome athletes who have joined our Riders Alliance so far and we aim to give them a platform and opportunities to lead and inspire. Check out our website and join us on social media such as Facebook, Instagrom and Twitter to find out more. We’ve got some fun things in the works – tackling climate change doesn’t have to be daunting and dull!

And next, from the USA, POW (Global) Executive Director, Chris Steinkamp... 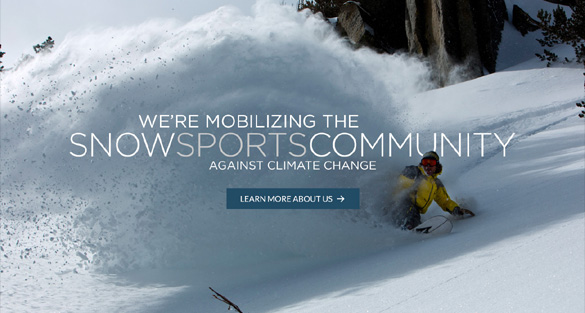 Q Has POW in the USA actually managed to affect any change to protect our winters?

Absolutely. Look at where we were five years ago – there was no voice on climate in Washington from the winter sports community. Zero. We’ve elevated our voices at the very highest levels and have had an impact on key climate decisions. We’ve raised awareness throughout this community and have given them ways to really get involved. In Utah here, we got our athletes and partner brands to ask the state governor to support climate action when he said he wasn’t going to. Finding wins in the climate battle is tough, but we have a few.

Q. Are the major product brands, who make money from snowsports and profess love and empathy with the mountains, doing enough to help protect our winters? What more would you like them to do?

Not really. They’re not doing enough, but progress has been made. Many of the larger brands have successfully tackled their sustainability efforts, but few have really done much on the advocacy side, where they have a ton of influence. Unfortunately only 1% of the snow brands support POW right now – and if we’re going to really take this to the next level, we need the industry behind us.

Q. How many pro-riders are signed up to POW and how do they help raise awareness?

We work with over 80 pro athletes now – the best of the best. As pro athletes, they have a big platform to inspire and influence others so we give them those opportunities. They speak to politicians, write editorial, push their sponsors, leverage their social networks and much, much more.

Q. There are other ways to enjoy the mountains apart than taking lifts around a resort. POW's founder, Jeremy Jones (below), uses 'boot power' to climb with his splitboard in backcountry without the aid of lifts. 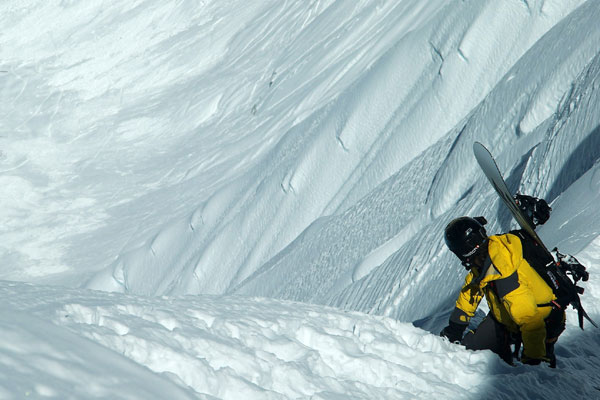 Our position is that those activities are great low-carbon options but it’s just not realistic or smart to say 'don’t visit resorts'. Resorts aren’t going anywhere nor should they. Instead, they can be part of the solution through sustainability, using their powerful economic voice, and helping us access thousands of guests each year.

Secondly, we don’t want to make ski touring the definition of a real climate activist because for most, going into the backcountry just isn’t realistic and we’d be alienating the majority of those we need for this movement.

Helicopter skiing is only for .001% of the population, so is it a real problem? No. Honestly, we have bigger problems in the climate battle. Mostly, it’s for the athletes and they do it because they have to for their livelihoods, for sponsors and filming. Many times, they have no choice and we understand – again, we just have to focus on the bigger picture, on the high carbon sources, while also making sure that in the rest of our lives, we do a lot more good than the bad, decreasing our overall carbon footprint, and we’re working with the most high profile athletes to raise the level of their advocacy and activism to outweigh the handful of heli trips they need to take a year.

Q. If anyone gives a donation, what is the money used for? How much does POW need to make a significant difference?

Eighty-five per cent of every dollar goes towards our programmes and initiatives so it’s all used very efficiently. We’re making a difference now with a very lean staff and long hours, but we could be doing more with more resources.

Q. What do you, personally, think is the single most important thing we, as individuals, can do to make a change?

Everybody wants a single thing – one single thing that anyone can do. But it’s more complicated than that, there is no 'one thing'. To be really effective, each of us has unique power in some way. But it’s not obvious. Think about how you can have the most impact on solving climate. For example, can you join your town council and get your town to embrace renewable energy? Are you a teacher or a journalist? Add climate science to the curriculum and to your reporting. Are you a pro snowboarder? Reach out to your peers. Do you have a powerful friend? Talk to him or her. Your big lever exists, you just have to find it.

Start making a difference by taking the POW Pledge, seven simple steps everyone can take towards protecting our winters in the mountains.