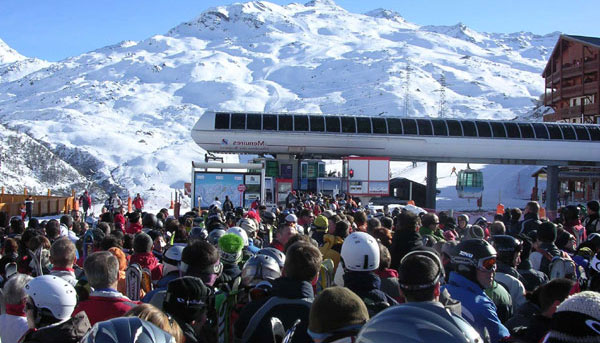 The author George Mikes once said, 'An Englishman, even if he is alone, forms an orderly queue of one'. Damn right we do. With the half-term hordes filling up the slopes, Oli Walker discusses international lift queue etiquette and whether Brits can stop themselves forming an orderly line?

We British love our traditions. The Queen, roast dinner, milk floats, fish and chips - we thrive on tradition. It’s what makes us so British in the first place – our inability to let go of our past. There is another tradition we are very well known for here in Blighty, however, and we do it every day: the queue.

If there’s a sign that says ‘Queue Here’ you’re damn right we’ll stick rigidly to it like a soldier stood to attention, not moving until a mystery tanoy voice announces ‘cashier number 4 please’. The unwritten rules of queue etiquette are there to be followed and it is a thoroughly British trait to follow them to the letter.

So as a fan of winter sports you probably know exactly where this conversation is going.

Where do I begin? The world is full of idiots it seems and as soon as more than a dozen people decide they want to use the same lift to go up the mountain, you’ve got problems. It’s a minefield of arrogance, brutality and stubbornness, a clash of the classes as the masses come together. You cannot escape.

There are many issues with lift queues that not only infuriate me (and most of you, I presume) but baffle me. Some rely on being a complete tool to get to the top before you while others are more courteous. I’ve seen many variations of tactics put into operation and I can safely say there is no one way to approach it. The polite British way gets you nowhere, yet the elbow-to-the-face Austrian is a fail-proof way to make enemies.

The British approach to a chairlift is to let everyone else go first. Hours of ‘after you, I insist’ gets you nowhere. It’s hopeless. If it was a British-led queue we’d all be in dickie bows and top hats, sharing tales of chivalry and romance while little Arthur and Henrietta dance merrily around in their winter furs. Throw in some locals and it’s party time. Let the onslaught of discreet tutting for those who cut in and cut up begin.

You wouldn't do it to someone's car in a car park

The thing that really gets me is those people who smash into your skis over and over. It’s not as if skis are cheap and we don’t love them like a cute little puppy – my skis take pride of place in my bedroom the other 358 days of the year so I can shower them with love whenever the moment strikes. The last thing I want to see is some douche scraping over them with his oversized planks of lead, tearing at the top sheet and blemishing my beautiful babies with ugly scars and unfortunate scratches. You wouldn’t do it to someone’s car in a car park if you wanted to fit into a tight space so why is it acceptable in a lift queue?

Then there’s the group of ‘young adults’ or, as they should be referred to, ‘big kids’ who have had a few too many grappa at lunch and are feeling a little bit merry. Falling over, being twats.

It’s not just young people. either. Old people have their own tactics and one we’ve all come across before is the sly positioning of ski poles in front of your skis. That’s right, we see what you’re doing there Pierre, I know your game.

A river flows fastest on the outside

What about the ones that don’t even do it on purpose – the ‘I’m just waiting for my friend’ gang, hovering next to the turnstile in the way of everyone like a turd blocking up a drain? Remember that giant block of fat that clogged up the sewage system in London? Yeah, that’s you. You don’t mean to do it and we get that. Can you not just get on the lift and meet them at the top or is four minutes of alone time too much to handle? Think you’ll go insane before you reach the top? Possible Klaus, but unlikely.

If Year 9 Geography taught me anything it was this: 'a river flows fastest on the outside'. Sticking to the outside of the queue and staying out of people’s way is the best way forward, minimising the risk of WW3 breaking out. Job done.

Editor's Note: Our Year 9 Geography taught us that where a river runs straight, the current is faster in the centre and slower near the riverbank. Where a river meanders, the current is fastest at the outside edge and becomes slower near the inside edge. So, if the queue is straight, it would seem, geographically wise, then, to stick to the middle but, here, of course, is the most danger of damaged skis or snowboard with hordes on all sides. 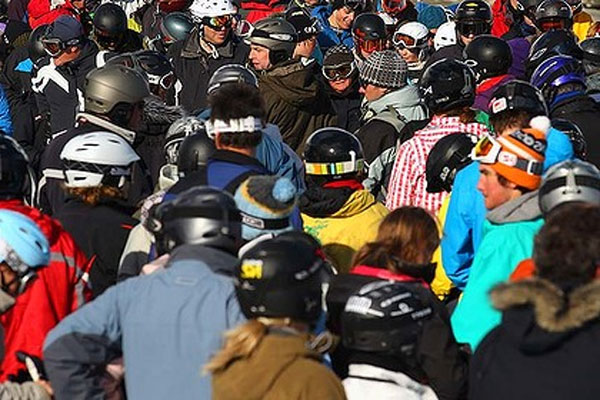 Avoiding confrontation like that is a typical British idiosyncrasy. We will never call anyone out on anything. We’re like that kid who sticks two fingers up at someone out the back of the car but keeps their hand hidden below the window. Whispered tutting and a shake of the head is all we can muster. We can’t deal with it because we’re just too polite.

Take the Germans, though. Ze Germans hate to queue. It’s all elbows and shoulders with them just so little Fritz can snowplough down a moderate blue run in his lederhosen before you and ruin all the snow. Snooze you lose. The Austrians are the same: 'Don’t worry about scratching my brand new skis up, you are clearly more important than everyone else here. Please, after you, I insist.'

And the French, well, while not as bad as some of their neighbours, a man with a great surname, Alexander Walker, once claimed 'the reason we British have the word queue is that the French had no further need of it'.

If you’ve ever queued in February half term in Chamonix then you know the score. 8:30am, the crowd are poised. 9am, and it’s like the start of a Metallica gig. Hundreds of petit pains scream their way across the snow and form a mosh pit at the base of the lift. It’s horrible.

A few safe tactics to employ

So how do you ensure you make it unscathed to the front of the queue? There are SIX safe tactics to employ:

1) Join a group lesson and sneak down the side. Just make sure it’s an adult lesson and not Francois’ Year Trois.

2) Pretend to be with people way ahead in the queue. This takes serious commitment as you risk it all going tits up quite easily (Alan Partridge calling for Dave, anyone?).

3) Hire a guide. Probably a bit extravagant if you don't actually want to go off piste, but if you’re serious about skipping lift queues and you’ve got money to burn then be my guest.

4) Stick to the outside, which is the fastest place if it's a meandering queue like a river - also, the safest.

5) Fart. People will give you a wide berth for sure.

6) Or get away from it all, hire a splitboard or some touring skis and leave the resort – you won’t regret it!

Whatever the case, queuing in a ski resort is a serious ballache. Sometimes you get lucky and find a quiet week. Get it wrong and you’ll be moments away from punching a kid in the back of the head for dropping his pole in front of you. Proper queuing is the mark of a civilised society and Britain does it better than anyone.