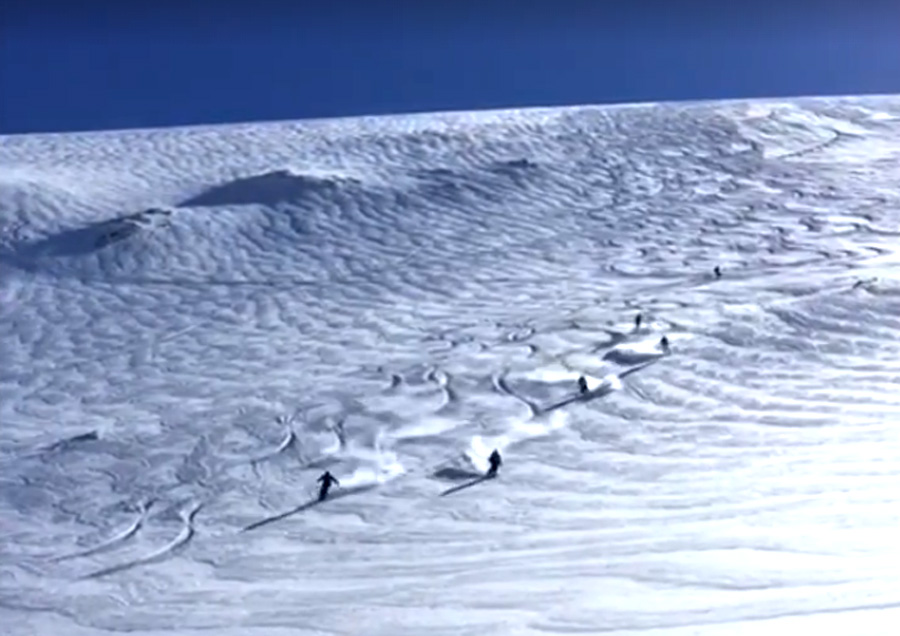 When it's a sunny Sunday morning after some fresh snow the day before and it's the middle of half term in February, the only way to win first turns is for ninja tactics and an early start...

There may have been the depressing sound of rain on Saturday morning along with grey cloud and warmer temperatures but at least it meant there'd be some fresh snow up the hill. So on Sunday I was on first gondolas with pow ninjas Ken, Kevin and Pikey hoping to score some sidecountry turns before the holiday hordes clogged up the lifts.

But, hmm, there was only a sprnkling, just enough to cover tracks which just meant you couldn't actually see the bumps and crud underneath before you hit them.

OK after a winter of powder every week whether sidecountry, slackcountry of backcountry, we're now getting fussy. We made first turns down Pikey's shoulder (right of Barres lift), then second turns as we did it again before hiking up the ridge at the top of the Vallons to the top of the old Balme chair and skiing beautful untracked (if a little crusty) all the way back to the Crete drag where the long lift queue at around 11am killed our enthusiasm for further forays.

For Gavin it was the start of an off piste week with Mountain Guides Per As and Kris Erickson so what better way to start than with a day in Per's backyard of La Grave? They were first on the lift and scored classic La Grave powder and a couple of Trifiddes couloirs. But it soon turned into a freeride frenzy as Gav says 'it was the busiest I've ever seen La Grave'.