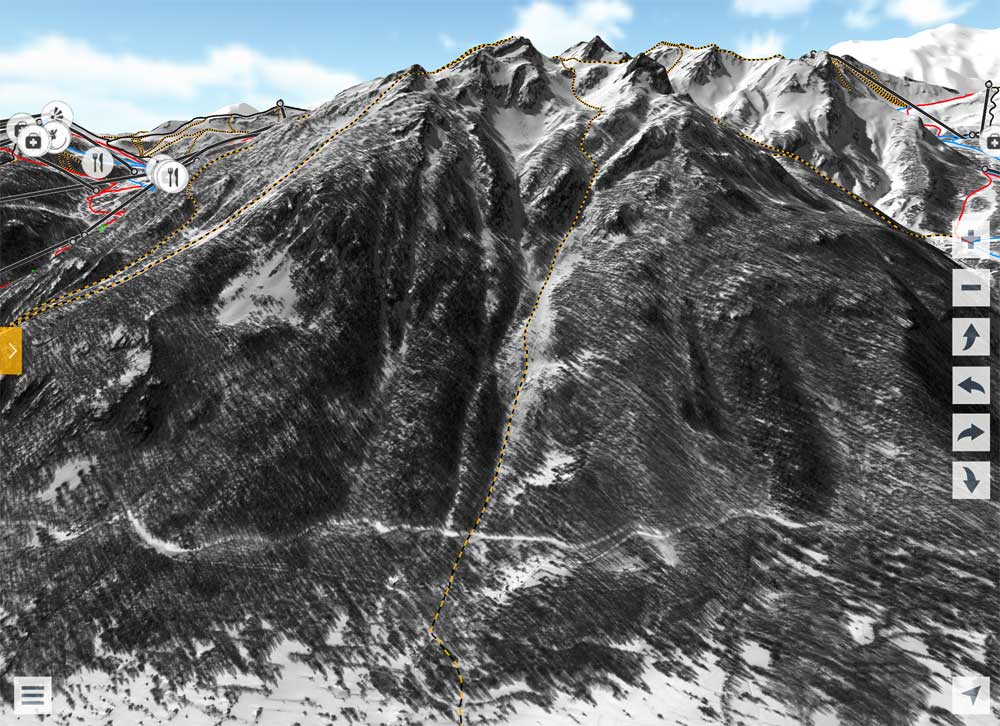 From the sublime to the ridiculous

When certain friends visit it's a bit of tradition that I attempt to give them an interesting time on the mountain. As they often use guides I feel beholden to give them a day to remember!

We awoke to a fair amount of fresh cms though we knew it had been windy so we were not too sure as to actual conditions, and as it transpired first few runs were very pleasant indeed.

We then took Vallons lift and hiked along the Roche Gauthier ridge and dropped in and that too was great though lower down snow was sketchy out of the trees, not too sure why, though possibly the wind and not helped by poor visibility.

With Elaine opting to retreat back home due to the poor light I suggested a route that I knew could well provide some drama as well as some epic lines.

The hike up Cucumelle was pretty tough and it was obvious that the snow was going to be very wind affected on the other side, though that was bit of an understatement as once at the top we had to walk down around 100m over the exposed rock and shale, and then once skis were donned it was hard going skiing the sastrugi in very poor light.

I decided to only opt for the Tête de Grand Pré traverse if someone had already made the track and as we were hiking Cucumelle I could see three skiers making their way.

It was extremely difficult with the poor light and lack of snow to get the right line to the traverse but we eventually made it to the notch in the rock you have to climb up through. However one of our party managed to loose a ski climbing through which resulted in a 10min climb down and 25min climb back up to get said ski.

It was once pass the notch that I saw that the previous group had skied down from there and not continued with the traverse. Whilst the ski was being recovered a guide with a small group came through and cut the track with me going second ensuring good spacing and making it slightly easier for the guides group. He then carried on a slightly lower line which had me thinking he did not know the route too well.

The route I wanted to do was a variation on the Guibertes Couloir I did a couple of years ago. I was pretty sure after studying Google Earth and maps that there was different entry to the route I had previously done and FatMap confirmed that. Not least it was written by someone I knew and trusted.

Ironically just as we were about to set off from the Col three PGHM guys (Pelotons de Gendarmerie de Haute Montagne) came by and we chatted about the route not least as one of them only knew the route I had previously taken and was unaware of this (easier?) entry, so no real pressure then if I'd got it wrong as they too followed us!

What I feared most was actually worse than I thought we might encounter, a total lack of snow due to the strong winds and once we put our skis on the snow was not at all pleasant to ski though the PGHM dudes skied it without any problems.

The route finding is very complex though were helped by the tracks of the PGHM but at the same time I did think that they might well take a more extreme line to a more conserabtive one that would be more suitable for us.

As soon as we were in the trees the snow just got better and better the further down we skied. Strange as it's usually the other way round!

Lower down and between the trees more bushes meant combat skiing as its best and there were some very tired bodies once we made it down to the X-Country track where we then had 3km of poling to get back to the van!