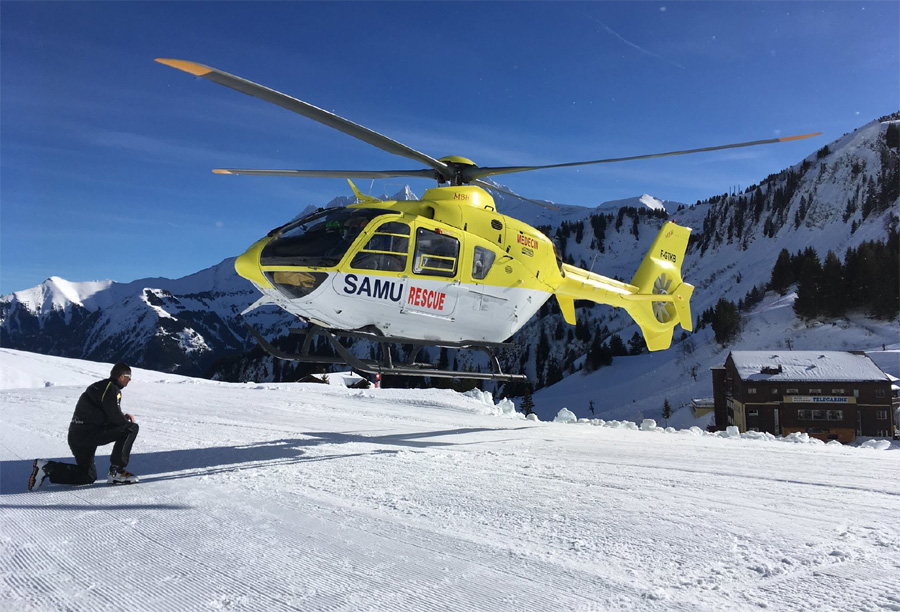 Haemorrhaging money as well as blood, our guest ski blogger, Chris Tomlinson author of Skiing With Demons was helied off the mountain. He blogs for Style Altitude from his hospital bed about his (costly) road to recovery..

With his humour if not his leg still in tact, Chris Tomlinson talks about that collision with a Swiss snowboard instructor...

It had to happen eventually – every skier’s luck runs out. After seven straight injury free seasons, mine ran out two weeks ago in the Swiss resort of Les Croset.

In an innocuous collision with a Swiss snowboard instructor, my right calf was sliced open, on what quickly became a red piste. Up to that point, Season 8 had been going well but it ended rather abruptly.

I’d had a bonus week just before Christmas in Les Arcs and I’d even managed to ski in England before that – in my local park. The journey to Morzine had been uneventful and the skiing conditions in the Porte Du Soleil were improving. Better still, I seemed to be skiing rather well – it was finally all coming together.

I had big plans for the season. I was about to head to Laax for a week of Ski Club leading and I’d booked a place on a BASI level-2 course in March. I was skiing so well that morning, I was starting to think I might even pass it. Along with my skiing plans, I’d left the chalet unmanned and my Land Rover parked outside it.

While the snowboarder applied his first aid training to my severed leg, I started to realise that all bets for my season were off and the focus was now on survival. Thirty-six hours later, after a ride in a sledge, a helicopter, an ambulance, a plane and another ambulance, I found myself waking up in a Birmingham hospital, talking to a plastic surgeon.

The journey had cost me €2550 – but it was worth every penny. The helicopter ride cost €968 alone, which seemed like a very arbitrary figure. Does anyone say to the pilot, 'that’s outrageous, I’ll walk'?

When skiing I carry a first aid kit, but like many skiers I suspect, I was not prepared for my own medevac. I didn’t have my EHIC card on me (it’s still good for a few months yet #BREXIT) and I didn’t know any of my insurance details. I didn’t have my passport either; it was back in Morzine, just over the border in France which could have proved rather problematic. But I did have a chunky credit card on me, which soon started haemorrhaging in sympathy. 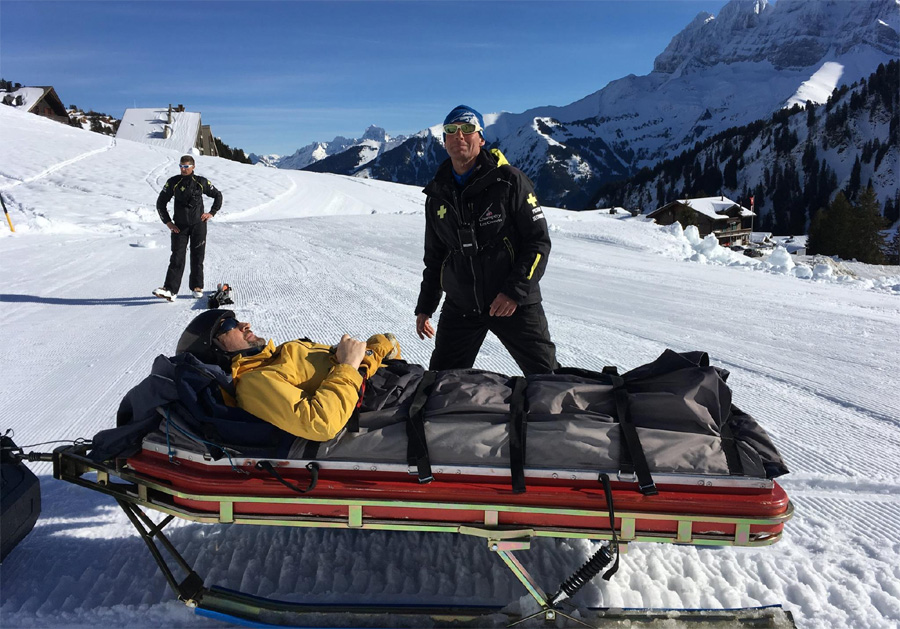 I was heading for reconstructive surgery in Switzerland, which I was more likely to survive than my credit card, until my wonderful girlfriend hatched a plan to repatriate me. The thought of a long stay in a foreign hospital was almost too much to bear but mercifully my friends pulled out all the stops and got me on a plane - all I had to do was escape from casualty. Debbie had found a top leg trauma surgeon and had a hospital bed waiting in Birmingham.

I knew I was back in the UK when people in uniforms stopped asking me for my credit card and instead of French accents I heard Brummie – thank God for the NHS, I thought, and that next time there is a general election I certainly won’t be voting Tory.

After the surgeon had sewn my leg back together I still couldn’t feel or move my foot. He explained that, after six weeks recovery and maybe another month or two of physiotherapy I would 'probably' get both abilities back. 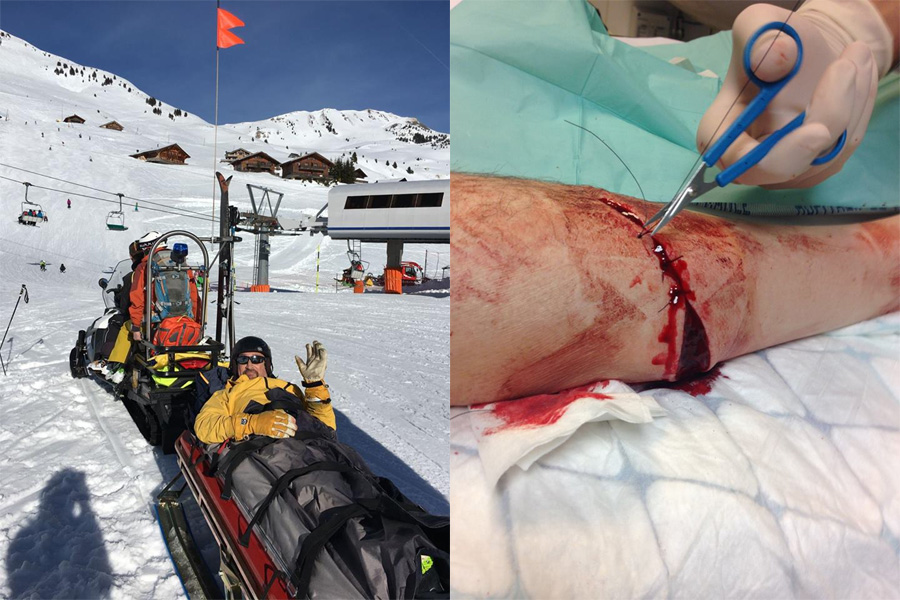 The good news was, the Winter Olympics in PyeongChang was about to start and it looked like I was going to see most of it. The other good news was, I’d have plenty or time to complete the Skiing With Demons Trilogy.

My third cathartic, snowy memoir was languishing on my laptop. I now also had the material for a suitably dramatically, if gory, first chapter. Most keen skiers will end up on crutches at some stage. If my books were to be a compendium of a geriatric ski bum’s life, then injury and recovery had so far been omitted - I was literally suffering for my art.

I might have welcomed the free time more if the snow during Season 8 wasn't shaping up to be epic. I might have to un-friend my Morzine friends if they don’t stop posting pictures on Facebook of the fresh tracks they're making.

Watching the Olympians is proving less frustrating than Facebook because I’ve no ambition (or the ability) to do what our elite athletes are doing on the telly.

I do regard skiing as a sequence of challenges and I suspect, if not winning medals, all skiers have their own private ambitions. Skiing is a sequence of challenges that start when we first put on skis. The first is to master the snowplough then successfully descend on a blue, then a red. Then for some of us our ambitions grow to skiing an infamous black run or complete some famous off-piste decent.

On that day in Les Croset my skiing ambitions were instantly recalibrated. My new skiing challenge was not to qualify as a level-2 instructor, but to ski a green run without falling. The challenges on route would be to wiggle my toes, then my ankle, then throw away my crutches; then complete a successful descent of the Tamworth Snow Dome followed by a triumphant returning to Morzine to collect Landie.

I’ve witnessed other people return from injury and tried to help them with what I now suspect was patronising advice about psychology. I know the biggest challenge will come long after my wound has healed - learning to trust my rebuilt leg to support me.

I know I won’t be the first skier to make a successful comeback from injury, but it’s the first time I’ve faced this particular skiing challenge and frankly I’m a bit daunted.

Anyway, the men’s moguls are just about start and as that’s one competition I don’t mind sitting out off, I’d better put the laptop down and watch it. I might not be on a hunt for a medal myself but I feel like awarding gold to anyone who’s fallen, injured themselves and didn’t give up on skiing.

Copies of Chris’s first two books Skiing With Demons I and II can be bought here.

And check out the Piste Collision Risk 1-5 Flag Warning System.