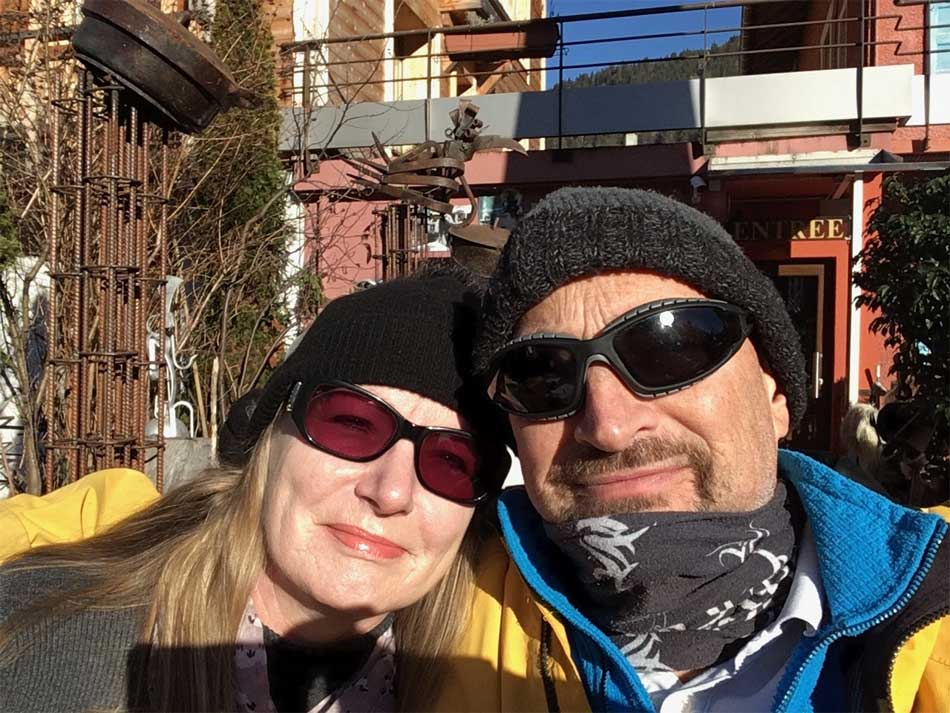 DISPATCHES FROM THE HOME FRONT IN THE UK

Skiing With Demons author, Chris Tomlinson, is now living with the demons of Covid-19, his intensive care consultant wife bravely battling on the NHS front line while he fights for sofa dominance at home with the Labrador...

Having married a doctor in December, I was all set to live a hypochondriac’s dream. My medical needs, real or imaginary, were further served by the GP surgery conveniently located next door to our home. Now, thanks to Covid-19, that union and its location seem to have rather backfired on me.

With NHS workers and their families at an increased risk of infection and surgery patients coughing on the other side of my garden wall, I feel there is a water droplet with my name on it - just because I’m a hypochondriac doesn’t mean I can’t get ill too.

Apart from going on hunter-gathering missions, I stay at home waiting for my wife to return from her hospital knowing she will be physical and emotionally drained. We might have been in lockdown for three weeks but her war on Covid started weeks ago when the NHS commenced its preparations for the inevitable tsunami of patients.

He should have priority use of the furniture

The new Mrs Tomlinson (Debbie) is an intensive care consultant but like most of her colleagues, she has never experienced anything on this scale before. Almost the entire hospital has been turned over to intensive care. Each morning, despite the fear in the pit of her stomach, she keeps getting up and going to work.

While Debbie helps fight the biggest battle the NHS has known, I wage another war at home – trying to keep the dog off the new settee. Oscar the Labrador, clearly thinks that 'emotional support animals' are critical workers and he should have priority use of the furniture, but I’m having none of it.

This isn’t my first spell of being stuck at home with the dog. Two winters back, I was marooned on Labrador Island after a skiing injury kept me indoors for eight weeks (now well documented in Skiing With Demons III). Being on crutches for most of that period I started to exhibit canine behaviour - lying around all day waiting for Debbie to come home and feed me, and occasionally barking at the postman.

An exquisitely reconstructed nightmare for all concerned

This time, I’m not marooned alone. Our two recently fledged sons have been forced to return for the lockdown - an exquisitely reconstructed nightmare for all concerned. Even though, one of them is trying to sleep his way through the pandemic and the other eat his way out, I’m glad of the human company.

Once again, I find myself waiting for Debbie to come home, but this time I’m waiting to feed her, although she seems to be prioritising wine over food. Our conversation usually oscillates between the deadly serious and the trivial. Have you now got enough PPE? Yes. Did you manage to keep Oscar off the settee? No.

She tries not to relay the full horror she has faced that day - a narrative that is hard for a hypochondriac to ingest. However, I’ve usually watched too much Sky Doom (a.k.a Sky News) on the TV and I’m keen to verify the news reports with her experiences. We usually drink too much then go to bed and her nightmare restarts again in the morning.

I’m pinning our hopes of survival on already having the correct antibodies. We were both symptomatic after a skiing holiday in France, it's possible that we have already had and survived the virus. Many ski resorts were early Covid hotspots. It seems obvious now that places created for international partying would be giant Petri dishes. It also turns out that my phobia of packed cable cars was rational!

That holiday and the joys of skiing feel like distant memories now, even though it wasn’t actually very long ago. The glacial peaks of Saas Fee and the bars of Morzine seem a million miles away. I was worried about a different set of problems then, which all seem trivial now. Like most ski bums, my season was cut short and I’m spending my first Easter in the UK for a very long time. Normally, at this time of year, I’d be planning many trips to Cumbria to get my summer mountain fixes but, for all of us, life is not only under threat but on hold.

Turns out I married a hero last December

Although pining for the mountains, I do realise how lucky I am to be stuck in a house with more rooms than inhabitants and a garden. More importantly I’m currently healthy. I know this because, like any good hypochondriac, I take my temperature three times a day. While sunbathing in the garden, I think of Debbie sweltering in her PPE and worry about her physical and mental health. I wish she could be marooned on Labrador Island with us – but her sense of duty is stronger than her fear. Turns out I married a hero last December, not a doctor, a hero the nation would applaud.

Lighten up the lockdown, read Chris Tomlinson's trilogy Skiing With Demons I, II and III (if you haven't already).