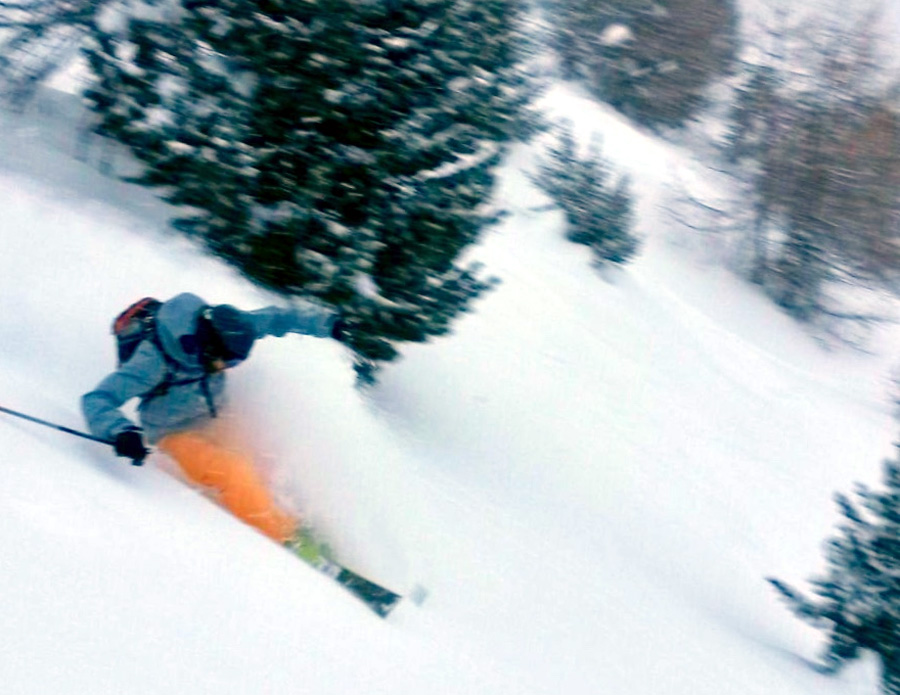 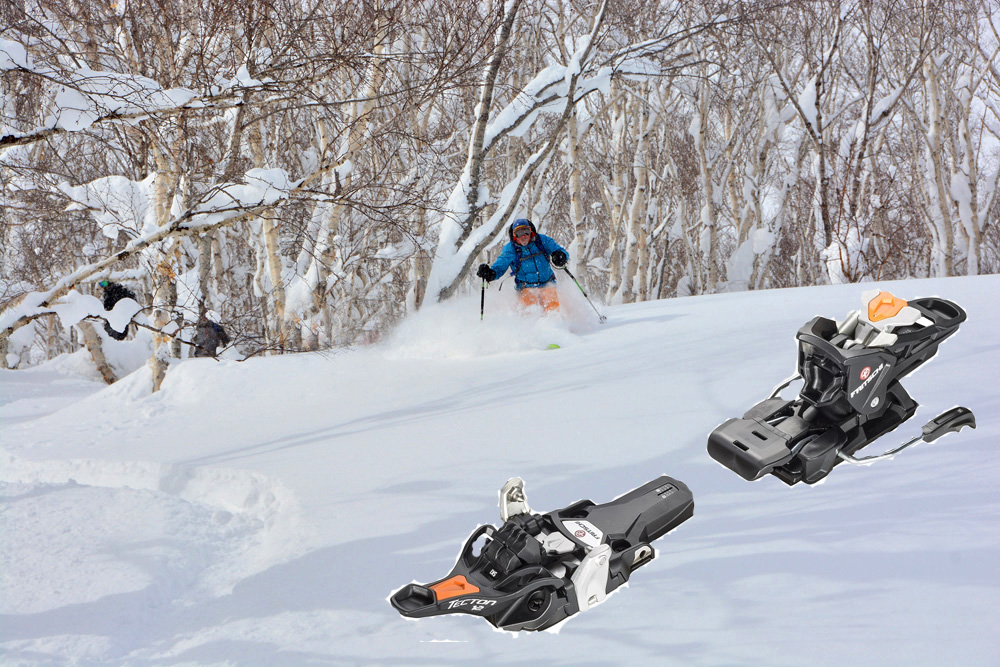 I've been using second generation Diamir Vipecs for the last three or four seasons with out any issues, so when the new Tecton was announced my interest was firmly grabbed!

As someone who has blown an ACL when skiing with an old style Dynafit (not necessarily to blame) the new breed of touring bindings that release and can possibly save another ACL is always a major consideration when having to think about new bindings.

From the outset the Tecton 12 appealed to me as, for this season, I'd bought new skis that would primarily be my one ski does everything outside of all out light spring touring setup(s).

My skis are Black Crow Atris 184 and 108 wide. These were never designed to be a touring ski however, as I only ski in tech boots, I did not want the additional weight of a touring frame binding when it came to climbing, while at the same time I wanted more downhill performance and a binding that would work with my Salomon MTN lab boots. So it was a no brainer when the Tecton came out as it ticked all the boxes with the alpine rear.

I've probably clocked up nigh on 45 days this year on them until now (mid February). Not every day I was skinning but a good 50 percent and the bindings are great.

For sure, as with all lightweight tech bindings, there can be some issues and I now make sure after clicking in that indeed I'm squarely in by shaking the ski and moving my boot sideways as I've had two unintentional releases due to user error, but this can happen occasionally with all tech pin bindings!

The big question, would I fit these to narrower more ski touring lightweight orientated skis?

And the answer is a resounding 'Yes'. 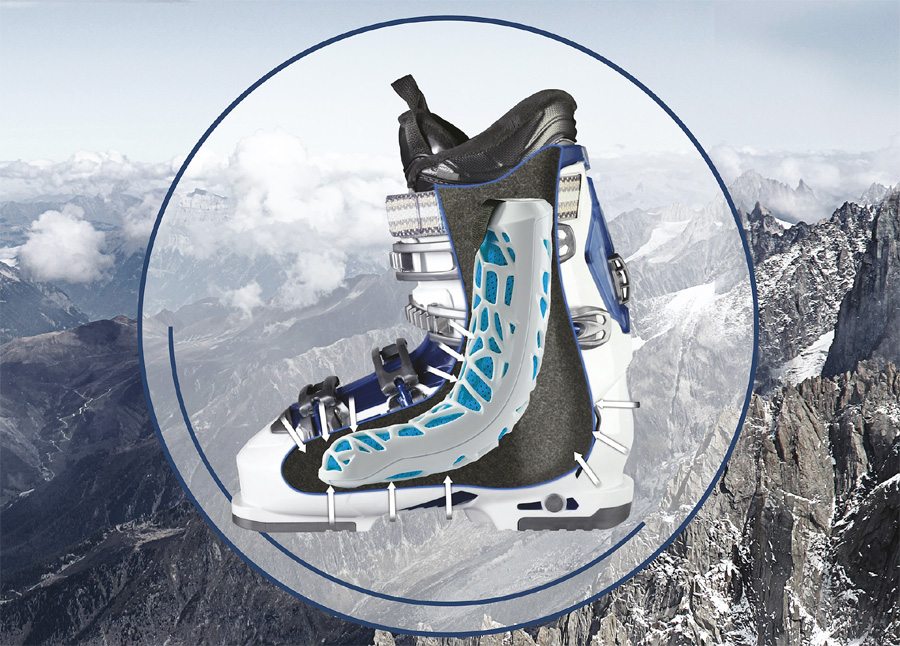 I've been using these pretty well throughout the season, though,because it's been so cold, I've yet to get really hot, sweaty and subsequently damp boots to really put these to the test.

That said I'm so impressed at the concept of these,as it say's on their tin 'Dries footwear 12 times faster than traditional airdrying. No need for batteries or electricity and can be reused multiple times, so is great for the environment and protects feet against fungi and bacteria.'

From a design manufacturing viewpoint they are superbly produced and look and feel like a real quality product that you'd think would be double the £30 that they do indeed cost.

Like I say, for me I think they will come into their own come the warmer weather with the long ski tours in the hot sunshine and then coming back home with none too pleasant boots that even the Rando Chiens seem to turn their noses up at.

That will be the real test, watch this space! 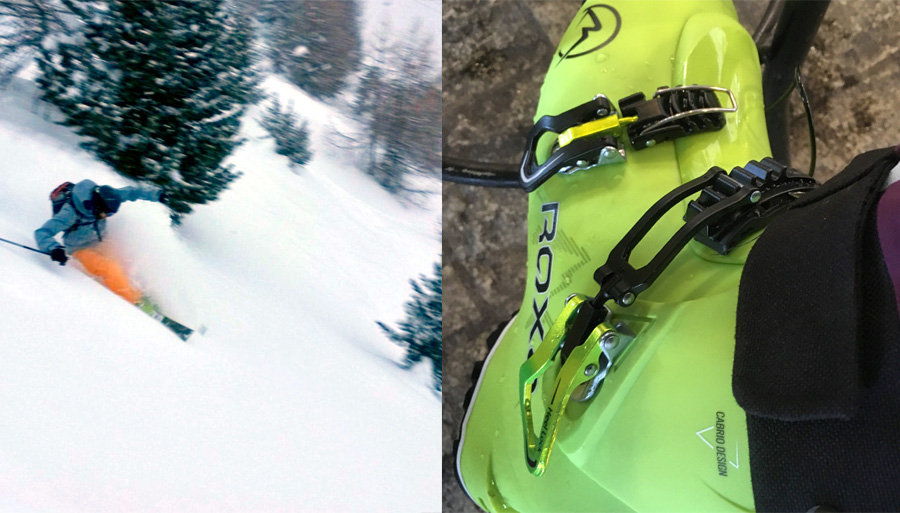 Created by Roxa in association with Glen Plake who, along with his wife Kemberly rock these award-winning freeride boots. Tracy, my wife, and I are also loving them as they're a three-piece cabrio high performance alpine ski boot that’s super lightweight and does away from the assumption that the classic overlap boot that’s been around for years is best! 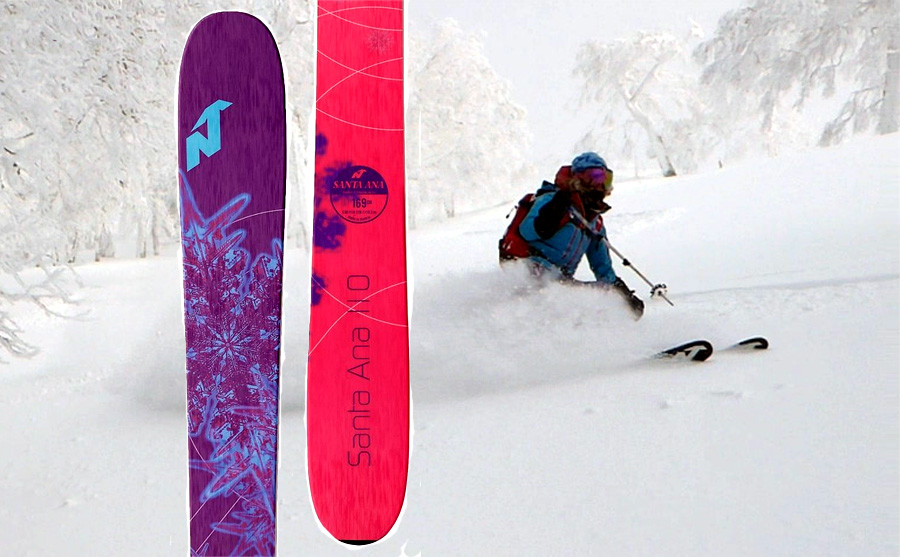 'I started riding the Nordica Santa Ana 110s back in November 2017 for early wnter ski touring. I mounted them with the Fritschi Tecton 12 bindings and SCOTT Superguide boots which have turned out to be the perfect set up for the winter. With so much snow in the Alps this season, they've been my go-to skis nearly every day and they really came into their own in Japan, loving the pow and, also, ligtweight for touring. Definitely my best friends on a powder day. On any day. These are truly an All Mountain ski that I'd recommend for any woman who wants some fun. 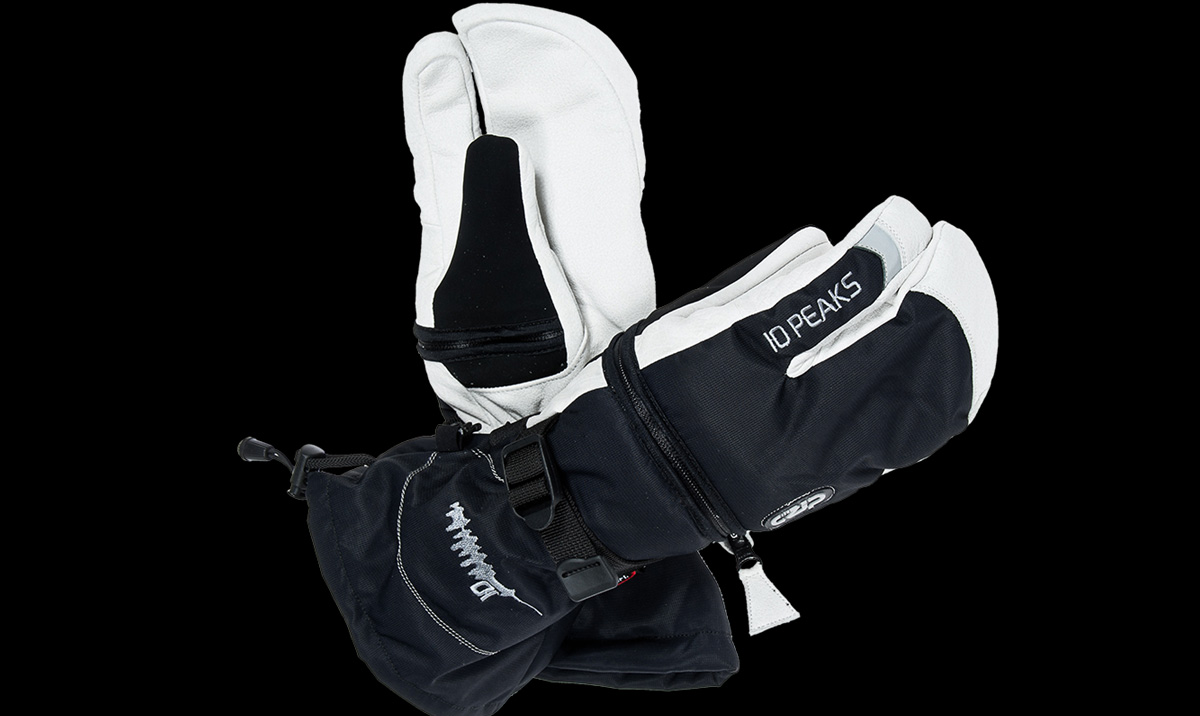 I never tire of showing anyone on the chairlift how I can use my mobile and never fear dropping my gloves. I've ridden with 10 Peaks gloves for the past four winters and loved them so much with their zips that allow you to extricate your hand, that they completely wore out at the finger tips. So going to Japan where it's finger-freezing temperatures, I invested in another pair. It's not often that you can say that, four years on in ski wear, an item is so good you just have to buy it again! 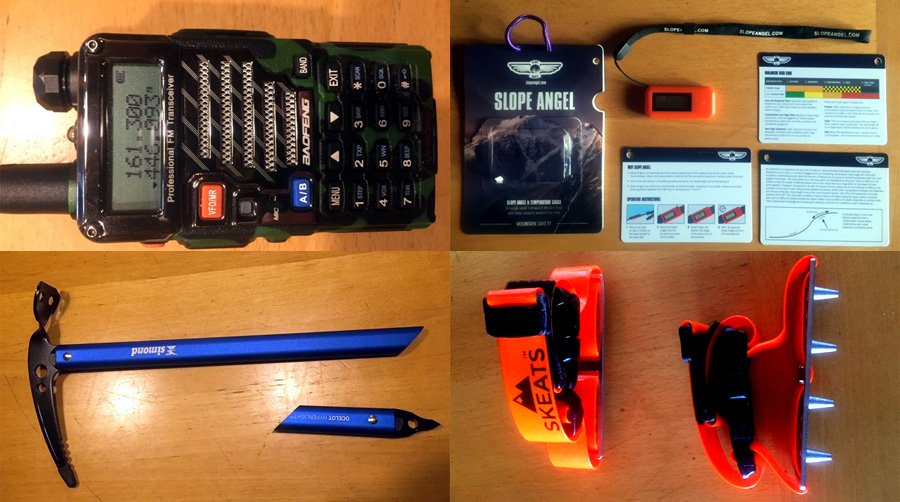 OK, so you're in the backcountry and the shit hits the fan, what ya gonna do? Cellphone...damn, no signal Whistle, really? Go for help and leave your buddy stranded? Didn't think so.

What you really need is a walkie-talkie like the guides use, right? But they're really expensive and you need a licence? Wrong!

The Baofeng UV 5R has a 5w output, unlike the consumer-level units which are restricted to 0.5w, is fully programmable and costs around €30, comes with a rubber-duck antenna and desk charger. Yes, €30!

Great reviews on this unit worldwide and you don't need a licence so long as it's only used on the emergency channel which is known as Canal E on 161.300 mhz and is monitored all over the Alps. There is an option for a small fee to register your unit with a personal code so it sends the user's details, however it can't send your location so you need some sort of GPS device to give out your exact coordinates, the nature of the emergency can be passed on at the same time to one of the operators.

Hopefully I'll never need to use it, but it's there just in case.

We picked up a sample of the Slope Angel clinometer/thermometer recently and have been putting it through its paces.

First off, it arrives nicely packaged with three useful cards covering the use of the tool and basic avalanche safety. The display is easy to read in bright light and simple to use, just press the button and it cycles three times through *C, *F and slope angle.

I found the best way to check slopes was to lay a pole on the snow and rest the tool on it, this levels out any undulations in the snow. The one caveat is just like using an app on your phone, it’s important to keep the unit horizontal or the reading can vary.

All in, a useful tool to measure one of the critical parts of the slope.

I've been looking for some time to replace my 30 year old Cassin ice axe with something a bit more compact and a lot lighter, but have always been put off by the €100+ price tag.......

Not any more, the Simond is €39 in Decathlon, has an alloy shaft with steel head and the 60cm version weighed in at 440g.

That was until I cut off the extra 15cm I didn't want or need to make the axe fit snugly in my backpack, filled the shaft with a champagne cork (epoxied in), now it weighs in at 339g, pretty competitive with way more expensive tools and for the odd foray in extreme terrain, I'm sure I won't be noticing the extra 40/50g weight penalty over a dearer one!

The guys at Skeats in the USA kindly sent us a couple of pairs of Skeats to review. These simple and easy to use alternative to ski crampons are a handy item for a ski tourer to have clipped onto their waist strap!

A doddle to deploy, simply lay the opened Skeat on the snow, step the ski on and fasten the clip, 10 seconds and it's ready, unlike a traditional ski crampon which generally requires the ski to be removed. They can be mounted either in front of the toe-piece or the heel piece, the former is by far easier and while it's not directly underfoot, doesn't seem to detract from the grip.

In use, the line taken up a slope is more rounded and less Z-shaped as the ski needs to be relatively flat on the snow for the spikes to work, so using them on a long side-hill traverse isn't ideal. However, for the times an approach up a hard snow surface is necessary, they come into their own!

In the USA the traditional ski crampon isn't widely used, but here in Europe they are, I see the Skeats as an addition to the trad crampons, not a replacement, but they're hanging on my backpack waist strap as I write this! 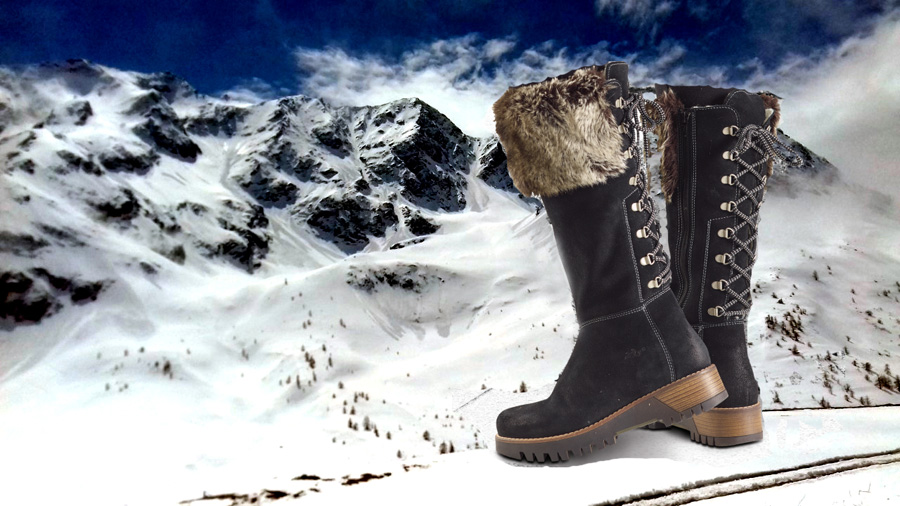 It's taken me about 15 years but I have finally found the perfect après ski boot for me! Non-slip soles, of course, but a bit of a heel too for extra height. Waterproof with amazing pure wool lining that feels soft like fur. Easily zipped up, but with lacing at the back which looks good and serves the purpose of adjusting for skiers' calves and accommodating various thicknesses of tights, leggings and pants. Really comfortable and - best of all - stylish with the faux fur trim!