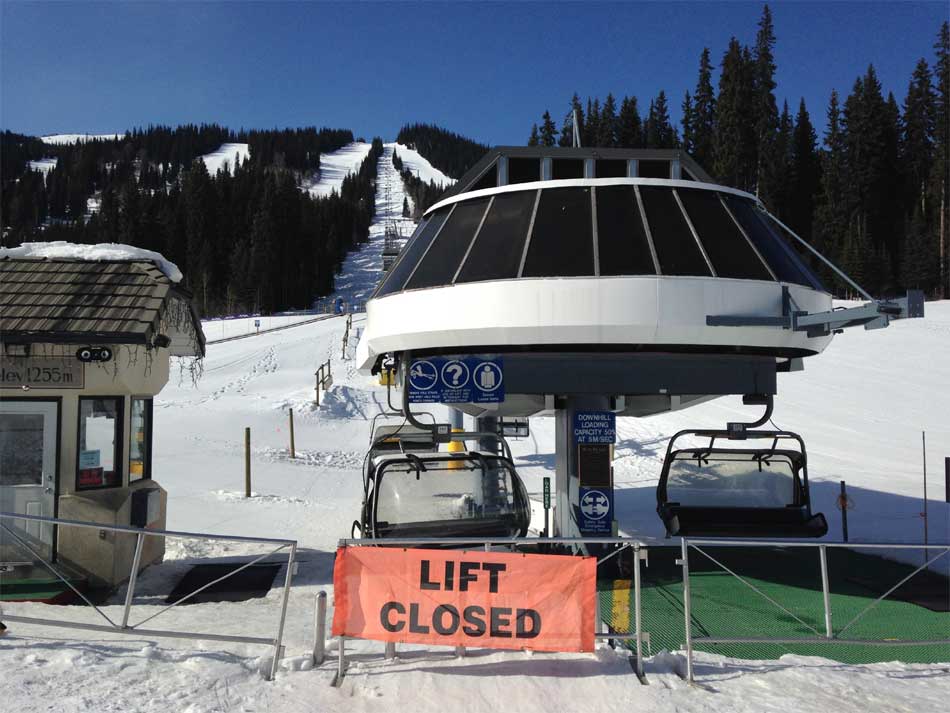 LOOKING FOR THE NEW NORMAL

Across the pond, the aim was for 100 days skiing in Sun Peaks for Louise Hudson, But that was in BC (British Columbia), BC (Before Coronavirus) and the shut down of the lifts across North America...

Walking around the sunny lower slopes yesterday - devoid of activity except for a groomer or two starting to desolately dismantle the terrain park - was instant nostalgia. Just the day before we had been skiing those rambunctious runs in the same bluebird conditions, feeling the joy of synchronised turns, rushing through cold air with warm sun on our backs.

That was day 71 on skis for me, a sensational ski season spent in Sun Peaks, BC, Canada with hubby, Simon and our two sons who turned up in December and liked it so much they found jobs and stayed. One of the best snow seasons on record, we thought we were heading for 100 ski days, planning to leave the day after closing date, April 13.

Like the mournful morning after a great piste party

We could never have foreseen this: empty slopes, carless carparks, lonely streets, closed signs hastily daubed on bars, restaurants and ski shops. A bit like the mournful morning after a great piste party.

After that initial gut-wrenching regret at it all being over so suddenly, I wandered around looking for the new normal. Trying to focus on the positive, I began to notice the happy sounds of kids playing in the snow. Off school now until September, they're not moping around. I followed a trail of discarded ski jackets, left where they landed, to find them making snow forts and ingenious toboggan tracks.

I noticed the focus on snowshoes and cross country gear

In the snowy Main Street, I discovered what could become an afternoon treat: the Rocky Mountain Chocolate Factory is still open! A couple of coffee stops, including my favourite Vertical Café, are still plying takeaway lunch and libations with well-spaced outdoor seating. Passing a few people taking advantage of the last days of the hastily organised 'end of season' ski sales, I noticed the focus on snowshoes and cross country gear – and I realised what I'm going to have to do to weather the coronavirus storm.

I dabbled in snowshoeing about 15 years ago when visiting Sun Peaks for the first time – once over the waddling-like-a-penguin stage, I enjoyed the ease of negotiating snow's ups and downs. And, in Canmore a decade ago, I tentatively tried cross country at the gnarly Nordic Centre (well, it was gnarly for me). I can't say I loved it but it is outdoors taking full advantage of the uplifting scenery, it's strenuous, and it's definitely more fun than doing the free exercise classes being posted online by the YMCA (although they are useful).

Already I've found snowshoes – a lovely friend from the Polar Bear Ski Club who I've been skiing with every Wednesday is lending me some today when we go down to the valley for a Costco foray. The nearest town is 45 minutes away so, without a car, I depend on rides for grocery shopping. There is a pickup service – Sun Peaks Cargo – but due to the unusual level of demand they are booked up until March 30! I hear we'll be in line for quite a while before we get our turn to shop, and no doubt we'll have missed the toilet rolls which apparently vanish in the first hour. Andrex are having a field day! They must be the only company whose shares are going up.

Over the weekend I plan to rent some cross country gear to give it a try and, if I like it, scour the Sun Peaks Survivors Facebook page for secondhand kit. Who knows, I may even get into ski touring! Frustratingly, we aren't allowed to use any of the 4270 acres of ski slopes due to insurance limitations. But the resort has allowed uphill traffic in one small area with a choice of descents. And, of course, there's masses of backcountry here too if you know where you're going. I've already been invited to join some of the Polar Bear members for XC – but, rather than look like Bambi on ice, I need to have a lesson and practise a bit on my own first.

Not quite as exciting as heading to New Zealand

After spending three months with our 20-something sons, it's weird having our apartment to ourselves. One has decamped to Vancouver to do some landscaping work and then is off to High Level, Alberta where he'll be manning a firetower for the summer, looking out for far-off forest fires. Laid off from his job at the Sun Peaks Grand on Monday, the younger one has joined his girlfriend in nearby Salmon Arm where they'll both be applying for agricultural jobs soon in the hope that anything to do with food must go on. Not quite as exciting as heading to New Zealand to take advantage of another ski season and all the Kiwi contacts they made this winter!

With the self-isolating, self-distancing culture it seems that restaurant recreation is out. There are a few staying open until this weekend but it'll just be delivery and takeaway after that. Could be ordering quite a lot from Mountain High Pizza! However, we've already been invited to a couple of small house parties, so hopefully we'll be able to continue subdued socialising for a while. Cooking and home baking are definitely making a comeback.

Ski bums dispersing back to their homelands

One friend has created an ice bar at the back of their hillside home – ingenuity and resourcefulness are definitely the way to go these days. The Sun Peaks Rotary has already set up a Food Bank for needy people. And I'm hoping to help the resort out by volunteering my writing services to Sun Peaks corporation. The 900-strong community here is very friendly, generous and inclusive so I'm sure this intrinsic ethos will permeate the next few months – albeit with 70s ski-length distancing.

Around Canada, the situation is the same: tantalising ski hills shuttered down, ski bums dispersing back to their homelands, others hanging around to squabble over the few summer job opportunities, and locals reverting to the winter sports that existed for eons before ski lifts were invented.

Many US states, like Colorado, have shut down every resort

At Kicking Horse, Boo the Bear, who hibernates on the ski slopes, emerged from his den yesterday, inspired either by warmer temps or perhaps the lack of terrain traffic outside his door. Many US states, like Colorado, have shut down every resort and corporations like Vail Resorts and Alterra issued blanket closures last week. Elsewhere there are a few, independent resorts open, stubbornly insisting, like Finland and Sweden, that skiing is good for health and happiness and can easily be maintained with sensible social distancing. These include Alaska's Eaglecrest, Montana's Snowbowl and California's Mt Baldy.

Things are changing all the time but, for the lucky locals in these areas, every mountain minute matters!