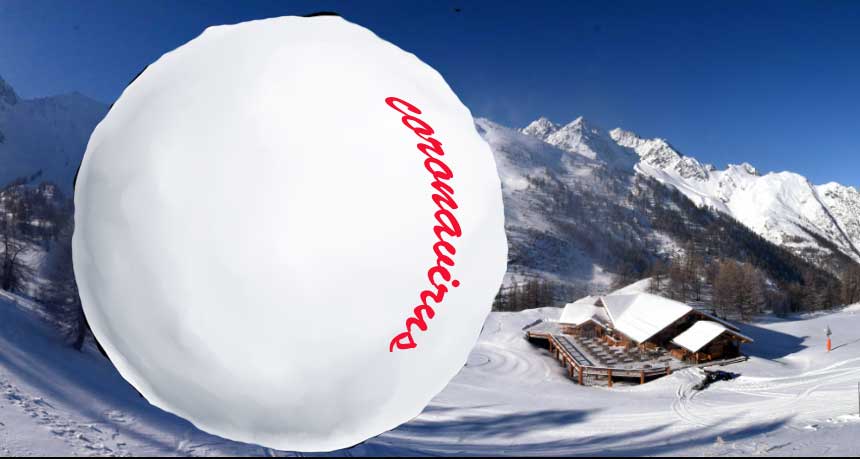 With all the ski resorts closed in Italy will France be next to shut down the lifts? The fear of coronavirus is gathering momentum like a snowball down a couloir. So what happens next...?

As I write this with Europe - and the world - in varying states of panic over the coronavirus wiping out civilisation I feel like I am leaving my last words to be read by future inhabitants of this planet. Only, of course, I should be writing on paper rather than via a dimension that will leave no clue as to its former existance.

With Italy on lockdown and France's cases of the virus increasing by the hour, we're sitting at Style Altitude HQ in the Southern Alps facing what could be catastrophe for ski resorts (let alone the fragile and elderly), even more of a worry at the current moment than climate change and far more challenging than Brexit.

For us, the snowball started to roll last week when the SIGB ski test was cancelled at the last minute in Pila, although that part of Italy was way outside the red zone around Lombardy. The big brands dropped out first, starting with Scott, followed by Amer, Rossignol and Armada leaving only a few die hard smaller accessory labels so there was no point, as media, attending a test with no skis.

What was particularly gutting as we had pre-paid for accommodaton and had five testers going to Pila, was that the main brands then took their demo skis to Glenshee, instead, where those with bigger budgets could change plans and follow. At the time, though (and while writing this over a week later) Pila had no cases of coronavirus, same as Glenshee.

When Milan closed their universities and schools, however, what did everyone do? Go skiing. You could frisby a Neopolitan pizza from Claviere in Italy to Mongenevre in France, both part of the Vialattea, over a  border that has been hotly disputed over history and hence all the army barracks up on strategic points above the valley in Serre Chevalier. Italians are still marauding over to France to their holiday apartments even with Italy on lock down so most reckon that we're a sneeze away from our resort closing, too.

At least, while skiing you are in the open air and wearing gloves and Buffs to keep (relatively) protected from germs. But the gondolas are pretty empty as one sneeze and you could be dead.

So we haven't stocked up on loo paper yet because yesterday the supermarket was overflowing with it. There's also plenty of wine and cheese in the shops. What more could you want?

And if the lifts close we have our ski touring kit and plenty of snow up there all to ourselves.

If you've rediscovered the internet and are reading this 500 years from now and there's still snow in the mountains - or an alien-made equivalent - then peace and pow from Style Altitude 10th March, 2020.