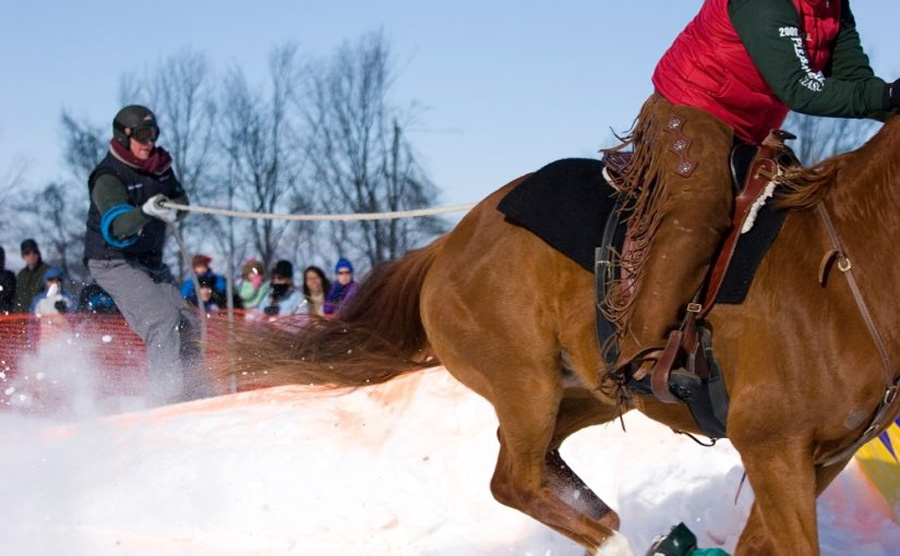 While the Winter Olympics caused a spike in mainstream interest in wintersports, it's generally a fragile niche industry catering to a small percentage of the population. However, with the changing needs of Millennials and those Baby Boomers still in the game, North American ski resorts are responding with contemporary dwellings, night skiing, dating apps and skijoring (above in Canterbury Park) trailblazing trends that will affect skiing and snowboarding around the world. 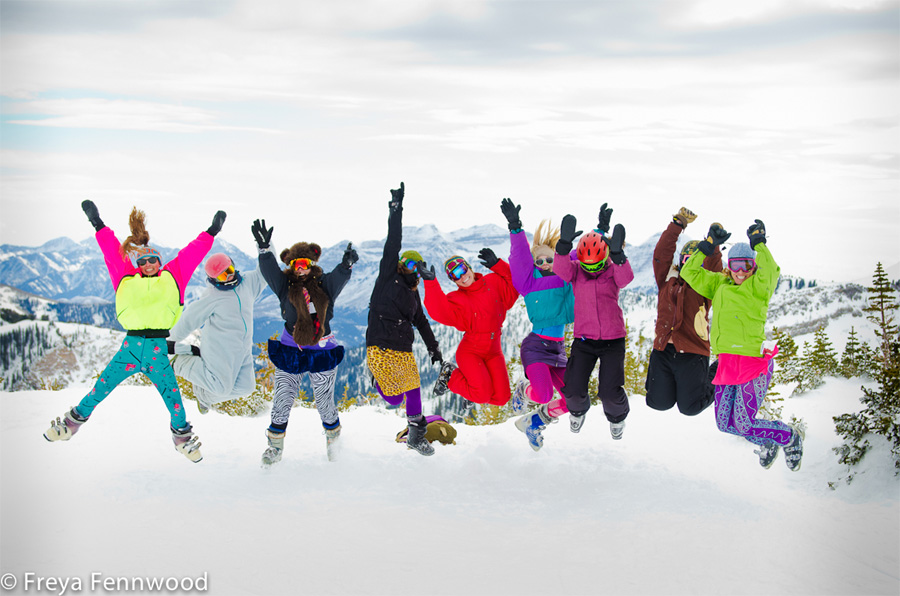 Encouraging Millennial women into skiing via She Jumps

Although the Pre Boomers and Baby Boomers (53 years plus) ski more days by far than younger generations in North America they won't live forever. But most mountain marketers have noticed that Millennials are not fervently following in the footsteps of the buoyant Baby Boomer ski market. With the pressure of student loans, marriage, babies, first homes, careers, and diverging spending priorities, Millennials are being distracted from downhill delights. Moreover, it requires two Millennials to fill each Baby Boomer's boots in terms of spending power.

Brighton, Utah offers a $149 discount for ages 26-30 this season; Sunday River, Loon and Sugarloaf ski hills have spearheaded a discounted season pass for ages 19-29; the Stratitude Pass at Stratton similarly serves ages 18-32;  Mt Snow and six other resorts belonging to The Peak Pass have The Drifter category for ages 18-29; and Taos features the Zia for the same age-range.

It's not just ski resorts encouraging Millennials. She Jumps co-founded by US pro skier Lynsey Dyer is one initiative with the mission 'to increase participation of women in outdoor activities' that attracts Millennial women (image above) with mountain events across the States from Vermont to Alaska including an Alpine Finishing School mountaineering course for skiers and splitboarders.

Appealing to the digital generation, skigear and clothing has gone high tech with app controlled tracking, music and battery-powered heating while ski and snowboard-themed dating apps are making it easier to keep wintersports in the family as Millennials seek like-minded life partners.

Meanwhile the Millennial mania for outdoor music events has led many resorts to set up spring festivals, following on the success of The Whistler World Ski and Snowboard Festival. These include Panorama, which launched High Notes last season and Sun Peaks which introduced Canada to Europe's Snowbombing Festival last April.

Happy Hours have long been utilized by resorts, bars and hotels to attract attendance during low-peak times of day and season. But these are getting more competitive. Take, for example, HyFive in Canmore, Canada which has an all day, all night happy culture with ALL beers, house wines, ciders, Hi-Balls and lots of nibbles at just $5.

Attracting locals and tourists, The Limelight Lounge – in Aspen and Ketchum – hosts five hours of happy hullabaloo from 2-7pm every night with live music five of those nights. It's the centre of après ski action in Aspen, anchoring its authentic ski town persona. One Ski Hill Place, at the base of Breckenridge's Peak 8 is luring local workers as well as deal-seeking guests to its Living Room bar, with half-price happy hour drinks and appetizers from 2-6pm and then again 8-10pm every night. And Altezza atTelluride's The Peaks Resort & Spa offers duo deals from 2-6pm and 7:30-9pm nightly, right on the slopes at Mountain Village. 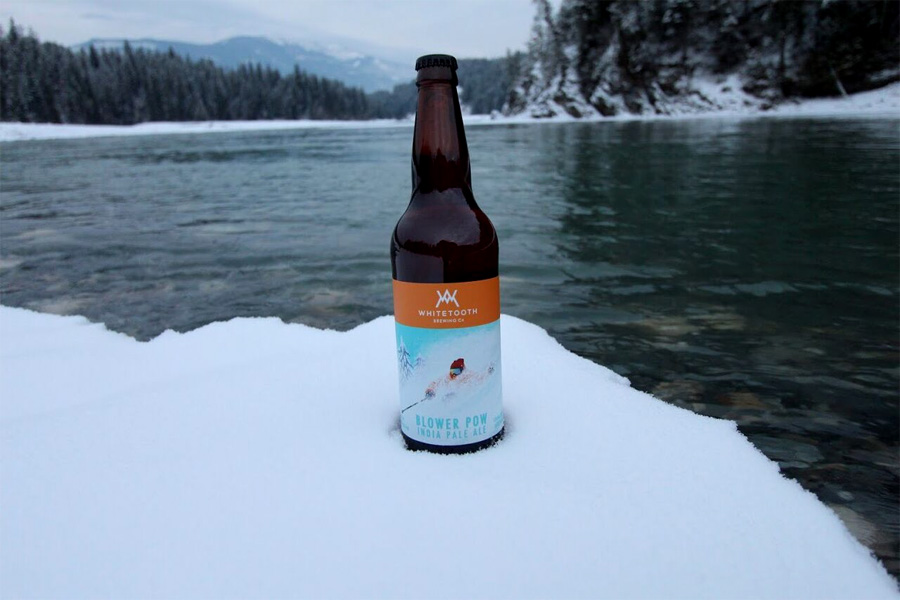 Mappy Hour, which was founded in 2014 by Alta ski bum, Sarah Knapp, has arrived in Canada where Resorts of the Canadian Rockies has espoused the social/educational format to inspire 20-36 year old cityslickers to get outside.

'We've hosted a number of guest speakers including a National Geographic photographer, rock climbers, backcountry snowboarders, trail runners and world travellers to give a presentation to our attendees and inspire them through stories of their adventures and offering some advice on their area of expertise as well,' says RCR's Cali Sammell. 'This is meant to be a social event and is hosted in a pub type environment – attendance is always free.'

With the Calgary events orchestrated by Powder Matt Mosteller, it's a great opportunity to spread the ski/ride vibe especially to RCR resorts Nakiska, Kicking Horse, Fernie and Kimberley.

Then there's the new Yappy Hour for pampered pooches and their patient parents. Now that pets are becoming redefined as 'emotional supports', resorts and hotels are relaxing pet policies and persuading punters to pack the pup with the rest of their baggage.

Yappy Hours and customized canine menus are proliferating, notably at the Waldorf Astoria Park City - dubbed 'Bark City' featuring canine massage - and The Pines at Beaver Creek which specializes in pup-cations including dog jetlag recovery and turndown service. The Madeline, Telluride has pet groomers and sitters as well as a Pampered Pup Package. Across Canada the Fairmonts offer pet-friendly facilities as well as their own Canine Ambassadors available for petting and walking.

Ski resorts in Canada are attracting newbies to wintersports with Never Ever Days, a $25 ski or ride programme which includes lift ticket, rentals and lesson – available at 80 resorts. And America's Learn to Ski & Snowboard Month lures newcomers to resorts in 36 states in January each year with sweet deals on beginner packages.

This year, the Bring a Friend Challenge extended the downhill deal through Olympic month. One of the most affordable introductory programmes is Learn and Earn at Snowbasin, Utah where newbies buy into a package for three lift tickets and lessons, and season-long rentals and, on completion of the programme, are awarded with a season pass.

Ski pass collaboration has been gaining momentum ever since Vail Resorts challenged the season pass system with its lowball Epic Pass, now covering 46 resorts worldwide. Their latest move in 'Mountain Monopoly' was to tempt Telluride to join Epic Pass, announced in January 2018. Competition is headed up by Alterra which recently created the IKON collective pass encompassing 22 North American resorts and, the 'Mayfair' of wintersports, CMH heliskiing.

Other ski instruction trends include mindful skiing which is morphing in response to the Millennial fascination with meditation. Courses in the USA include Her Mountain at Northstar, Tahoe which was inspired by VP and GM Nadia Guerriero, who designed the women-only instruction programme to embody mindfulness and health alongside confidence-boosting ski and ride instruction.

Sundance, Utah offers a guided meditation and relaxation session daily before skiing. In Canada there's Skiing with Mindfulness at Blue Mountain, Zen and the Art of Mountain Maintenance at Mont-Tremblant, Big White's Mindful Nutrition Ski Retreats and Retreat Golden BC. 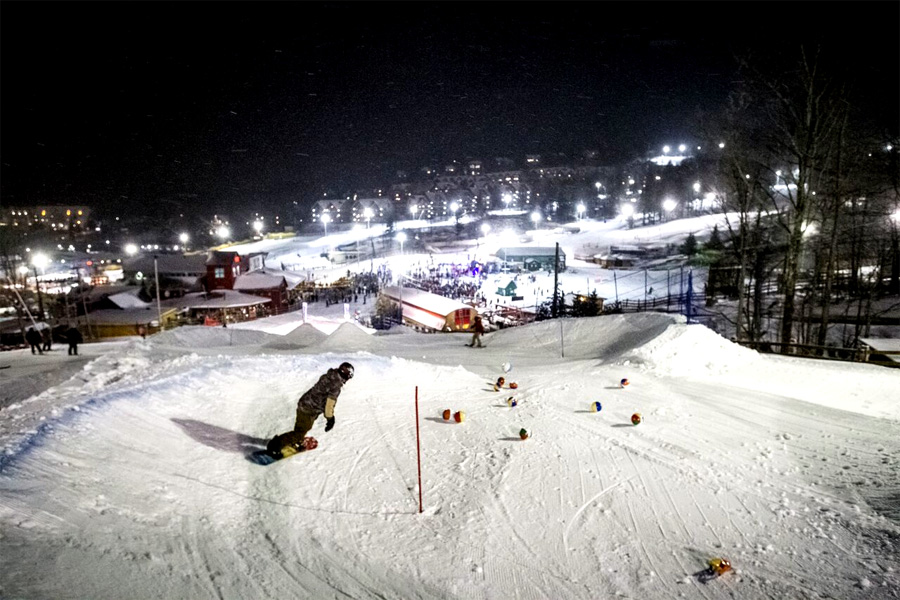 Fancy floodlit skiing until 2 am? Bromont, Canada offers this on eight Saturday nights during the season, along with coaching, DJs, and bands. With 102 lit trails, 32 glades, six snowparks, and nine lifts – open until 10pm every night - Bromont has the most extensive night skiing in Canada attracting around 1,400 skiers nightly.

Elsewhere, night skiing is expanding to cater for skiers and riders who can't get to resorts during the day and tenacious tourists keen to notch up nocturnal gnar – resorts include Kimberley, Mt Norquay, Panorama, and Big White in Canada and Keystone, Squaw Valley and Steamboat in the USA. 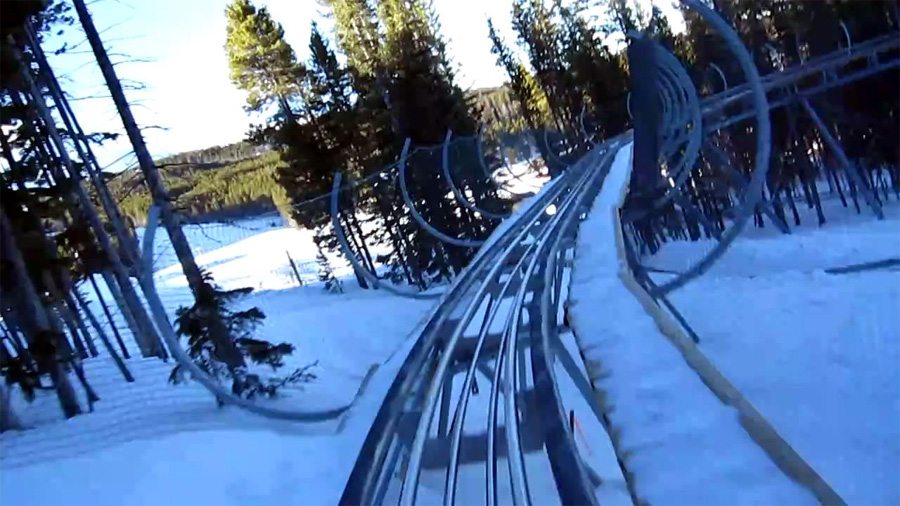 More mountain coasters were launched in Colorado last year than new ski lifts. Fast becoming an expected ski area après accessory, they are attracting families and Millennials at resorts such as Aspen Snowmass, Breckenridge, Steamboat and, in Utah, Park City.

For the past decade resorts worldwide have been branching out to encompass more diverse experiences including winter fat biking, ziplines, tubing, skijoring and snow kiting: all part of 'the experience economy' where thrills and magical moments are taking over from materialism for Millennials.

Snow kiting clinics are available in Canmore, Québec and Toronto. And resorts are cashing in even on ski touring, which used to be a free way to get a skiing fix. Now, there are courses on safety, guiding to slack and backcountry areas – for example, Fernie's Backcountry Basics.

Just like the legendary Dick's Tea Bar in Val d'Isère, North American resorts are immortalising the almost extinct T-bar lift with cafés, bars and nightspots. Hanging on to the nostalgia are resorts such as Castle Mountain, which still sports a 50-year old thigh-burner, servicing over 1730 vertical feet, and its namesake watering hole whose walls flaunt five decades of mountain memorabilia.

Other T-Bars can be found at Panorama, Steamboat, and also Breckenridge, which offers both the painful version, accessing its highest terrain, and the reward at the base of Peak 8. 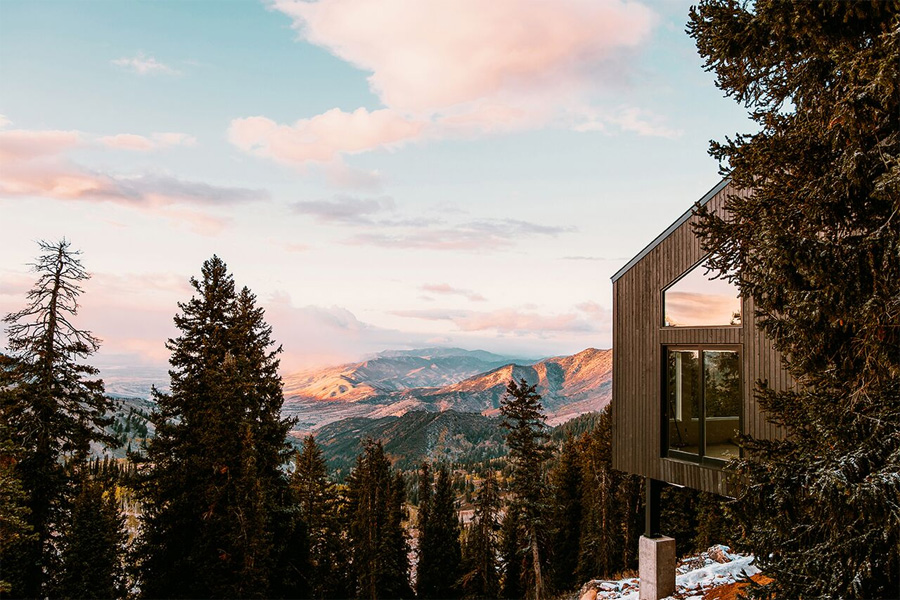 The concept of building big is no longer better for Millennials and the 'tiny home' trend is influencing ski resorts – in Utah, the young collective that owns Powder Mountain is constructing 500 square foot modern mountainside chalets or 'nest' homes, rather than investing in McMansions, mirroring the Millennial move towards smaller, brand-new or refurbished, state-of-the-art and eco-friendly homes,

'We've seen the emerging trend of refurbs in hotels and motels. We've done a lot of research, talking to companies like Yotel for ideas and looked at the Base Camp idea in Tahoe and Jackson Hole. We're bearing in mind all these ideas for our boutique hotel and addressing Millennial needs – smaller but really ergonomically-designed rooms, where the lobby becomes the main focus, with a really good bar, social areas, and stage for live music.'

Other Millennial mountain momentums include co-working space which is redefining the ski bum, who could now be anything from a telemarketing stockbroker to a lifestyle migrant. At Heavenly, the Tahoe Mountain Lab co-workspace is ski in/out at the top of the California Tram. Telluride is luring young entrepreneurs there by offering $30,000 funding, office space, mentors, and business training to those with the most innovative business ideas.

Crowd-funding is targeting Millennials with money to invest in their favourite ski hills – for example Red, BC launched its Own the Mountain campaign last season to remain independently owned in response to the current corporatization of the North American ski industry.

With Millennials, in particular, wanting instant fixes – and many urbanites opting out of vehicle ownership – access to ski area needs to be easier and speedier. Telluride has recently sponsored direct flights to its nearest airport, Montrose from hubs all over the States. This is good news for European skiers keen to ski this iconic destination as they can now fly non-stop to Charlotte, North Carolina and hop onto the Saturday Montrose flight. 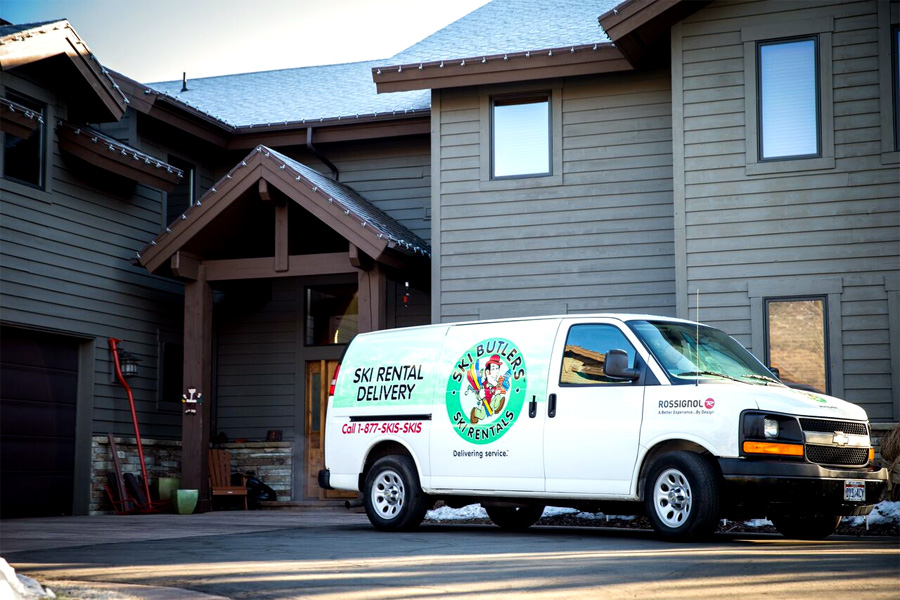 Everything is about delivery and convenience these days, especially in equipment rentals.

Ski Butlers delivers skis, snowboards and boots direct to hotel, house or condo with personalised fitting and free adjustments. Since launching in 2004, the Park City-based business has expanded to serve 37 North American resorts in Colorado, California, Idaho, Montana, Utah, Wyoming and Whistler, BC and, this season, started a service at seven top destinations in the French Alps.

'With Baby Boomers retiring and generations X and Y becoming the dominant demographic in consumer spending, their wants and needs, and therefore our industry's priorities, have shifted,' says Mike Cremeno, Ski Butlers' VP for Sales & Marketing. 'In the social media age the services, amenities and commitment to excellence must make your product or services offer go above and beyond for every customer.'

Rivals include Black Tie Rentals now operating in 39 resorts in Canada and the US, rentskis.com in the US and Whistler; and even ski shops are going the delivery direction – for example,Telluride Sports, CO.

11) AND PROTECTING YOUR WINTERS 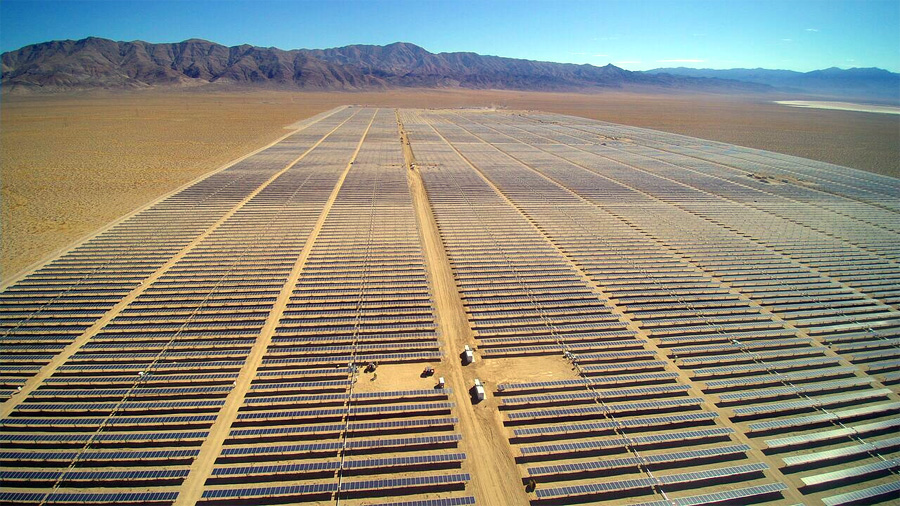 Solar is taking over the greening of ski resorts with first Mt Abram leading the way by installing 803 solar panels and now Squaw Valley pledging to run entirely on renewable energy in partnership with Liberty Utilities by this December. Vail has a 2030 clean energy deadline and Aspen has started installing solar panels.