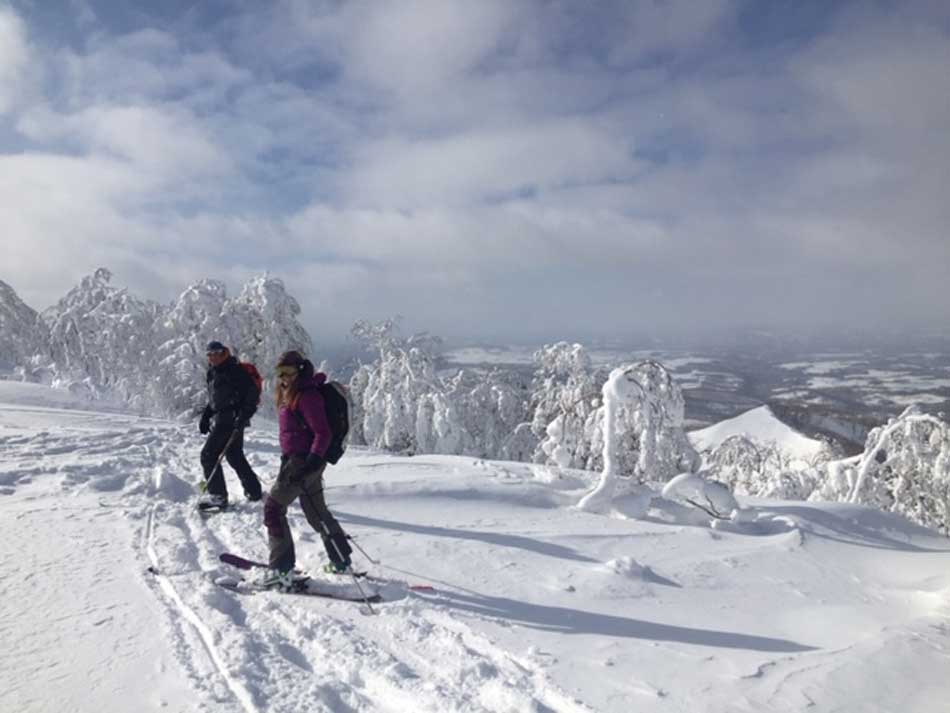 Ski tour up, Ski down in pow. Repeat. This is the ski touring way in Japan to earn your turns. It's Rule Number 5 for the legs especially with gnarly run outs and sitting cross-legged at restaurants...

While my butt is very happy to be in Japan for ski touring because of the bliss of heated Toto toilet seats, my legs are somewhat complaining.

Firstly my quads were quaking because of running up escalators and along walkways with bags in tow at Heathrow so as not to miss our connecting flight from Marseilles to Tokyo followed by a cramped 11 hour flight plus another two to Sapporo.

And then, boom, four days of backcountry skiing and ski touring.

Not that my legs aren't used to skiing and ski touring having done plenty in Serre Chevalier since November. But ski touring in Japan is not like the Alps. Instead of one long three hour hike up, it's a case of three to five short climbs per day of around 250m. This is like doing tabata training as opposed to long easy jogs. And at the end of the day, there's always a gnarly run out with bumps, trees, side slips and tight turns to really give the legs some extra tensing.

On the fourth day following our super tall snowboarder guide, Yen from Sherpas Ride on snowshoes (his legs are twice as long as mine and he's half my age) it was a short but steep hike comprising 20 plus kickturns and my legs were going 'nonononono not again'.

But you earn your turns. If it wasn't for the ski touring up there wouldn't be those amazing runs down in untracked pow. And, yes, we have had superb powder even though, as Japow goes it's not been the best winter. The image, below, shows the difference between the wall of snow at Nito in January 2018 and in February 2020. 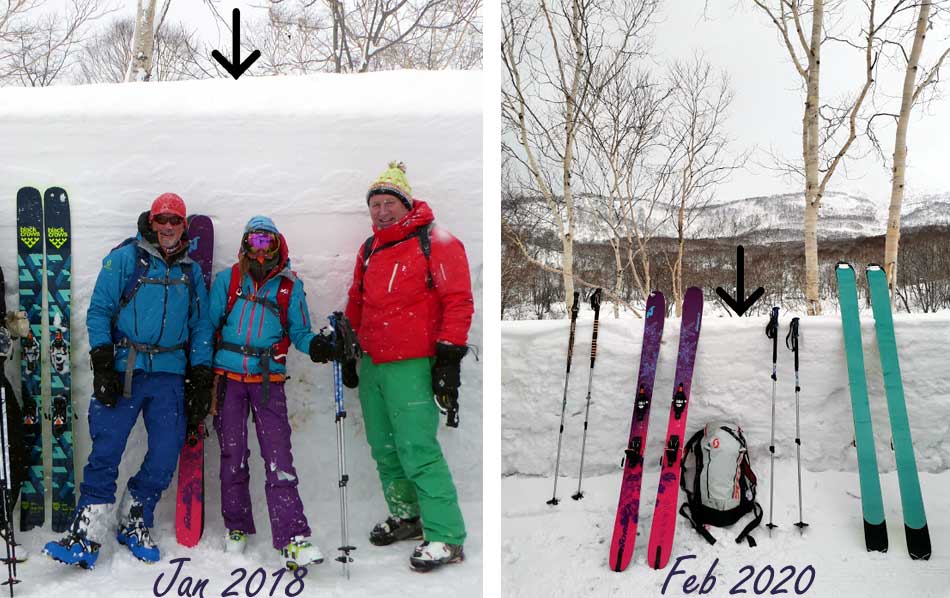 But the Japanese powder machine was working when we arrived with baltic termperatures, resulting in a slackcountry thigh deep pow ski in Kokusai that Yen described as 'the best powder day of the whole season'.

Yesterday, we woke up to the drip, drip, drip from the rooftops and almost spring like weather for February in Niseko. Legs were complaining. Again. This time it was because, hiking up at Nito, they were a tad too warm in fleece-lined tights, Merino socks and Decathlon freeride liner shorts.

How to shut your legs up? First tough love, your head needs to tell them, 'Rule Number 5' as in 'man the f**k up'. Next, give them something to look forward to as in a hot soak in a Japanese onsen after a day's skiing.

Then, just as those quads and calf muscles are relaxing and beginning to forgive you for all the SAS boot camp treatment, you hit a traditional Japanese restaurant and the coup de grâce of sitting cross-legged for dinner.