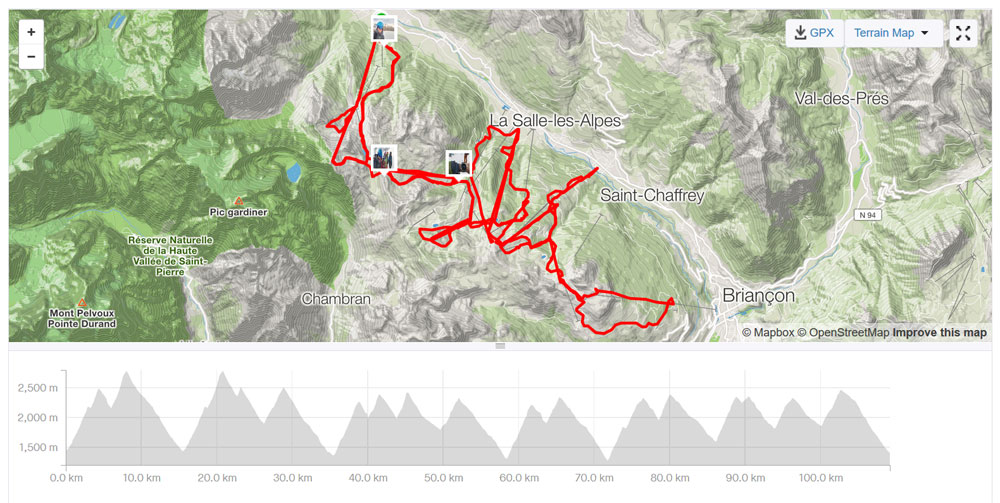 How best to make use of empty pistes

Most people out for their week's holiday will often ski all day, though interrupted with cafe stops and lunch, but our challenge was to ski 100km non stop

Last season a group of us skied together from one end of Serre Chevalier to the other end, so Monetier to Briancon and then back again.

By road it's roughly 15km each way, but when we skied, dropping down to the valley floor, up in the lifts and zig-zagging our way along without thinking too much we clocked up 70km.

So, this week, we all decided on the challenge to do at least 100km.

I, however, wanted to make it a little more interesting by throwing in the extra challenge for those that do like their 11 o'clock cafe halts, to make it the Non-Stop 100km Challenge, which meant taking refreshments to consume while in the gondolas so no need to stop in a resto!

Four of us started at 09:00 at Monetier, skiing back down to the bottom to clock the necessary kilometres and to retrieve a backpack with supplies that were left in a car.

This year is nigh on a repeat of last season as we've been under the influence of high pressure and the pistes are in glorious condition along with being very empty and subsequently no queues. So for the first hour or two we were skiing untracked corduroy. Then, for some, a cunning strategy came into play.

Take a piste like the Cucumelle, in places, it's almost 75m wide so if you ski it with long arcing turns edge to edge covering the whole area of the piste you clock up even more distance. Note that the idea was for distance but not necessarily speed as bombing flat out in resort may be tempting but it's not cool to take out an entire French ski school snaking down the piste.

By the time we'd reached the Briancon sector having our elevenses in the Ratier Gondola, there were some major discrepancies in the distances on each person's smart watch, which was strange as most of us were using Suunto Ambit GPS watches.

One of our group was also using the Ski Tracks app on his phone and that was showing the actual distance skied which was only a little more than half the total distance, including lifts, covered.

For some actually skiing 100km not counting lifts, could well be the next challenge, and for sure it is achievable in a resort with faster lifts than here in Serre Chevalier but you would need probably eight hours at least. And no queues.

It's not often you hear a group of pretty good skiers say, 'Shall we take the blue?'. But a red run whie faster top to bottom tends to be shorter so the winding blues usually added more distance, but we did draw the line at taking the long green chemins down.

On the return leg from Briancon, which is must faster than going the other way, it was apparent that some might have to do a couple of extra runs to make the distance on their apps, while I arrived at the final lift, the Vallons with my watch showing exactly 100km in just over five hours. 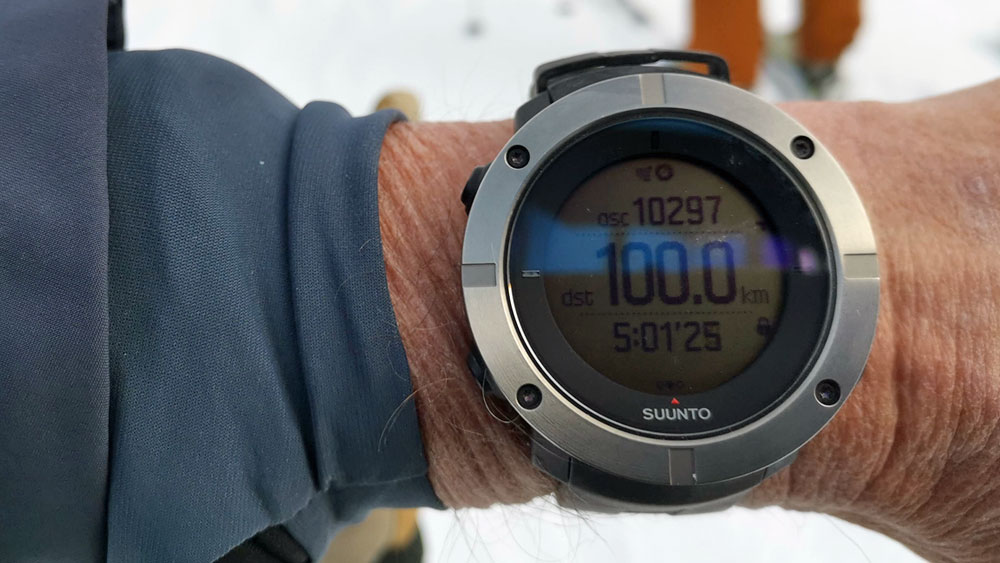 My final stats on reaching Monetier were distance covered 109.19km in a moving time of 4:56 and an elapsed time of 5:25.

My average heart was only 80bpm, half the rate when I am  cross-country skiing!

Special mention must be made for one of our group, Paul B, well he was with us only for the last 30 percent as we missed him at the start, so on his own, he valiantly proceeded with the challenge, and below is his Ski Tracks log. 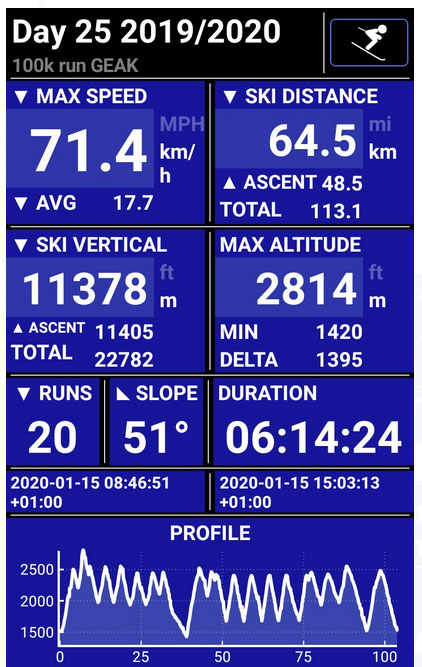 And so here are the founding members of the Serre Chevalier Non-Stop 100km Challenge.