Keeping Even Calmer and Touring Up The Pistes 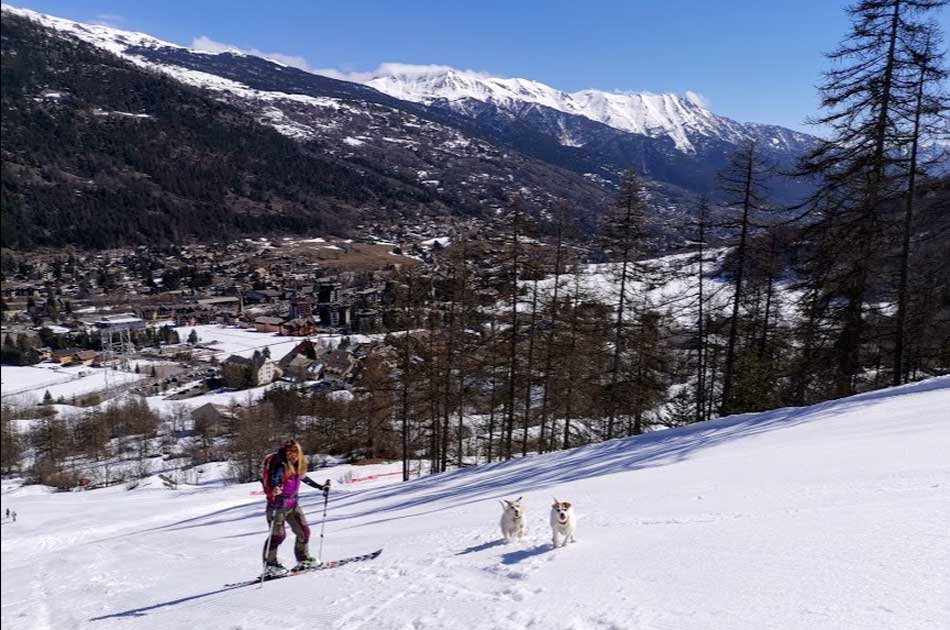 Why not? Walk the Rando Chiens and clear the head from last night's end-of-the-world party while enjoying the empty pistes. After all, it's not often that the dogs get to run on the pistes. Or we to make first tracks on ski spring corduroy...

We woke up this morning with a feeling of incredulity that the ski resorts in France are now closed - and also hangovers from last night's end-of-the-season/ end-of-the-world party.

But at 9.10am the silence up the hill was deafening. No lifts. The pistes, though, looked glorious, groomed to perfection yesterday evening, gleaming white in the morning sun.

The Rando Chiens AKA our Jack Russells, looked pleadingly.

So why not? Walk the Jacks and clear the head while enjoying the empty pistes. After all, it's not often that the Rando Chiens get to run on corduroy.

I climbed 400m in an hour to the top of Pointless (Pontillas gondola) while Gav and the Randos went up another 100m to the Cote Chevalier lift. The late morning sun was softening the snow even on the north facing pistes. We passed a group of Brits entertaining themselves without ski lifts (or presumably touring kit) by hurling themselves on toboggans from the first steep climb above Club Med. Then there were two skiers coming down, a couple of snowshoers and an intrepid runner. That's it.

And the groomed pistes were sublime, having turned to spring corn by the time we skied down at 12.30pm. Making first tracks on spring corduroy, now that's a first.