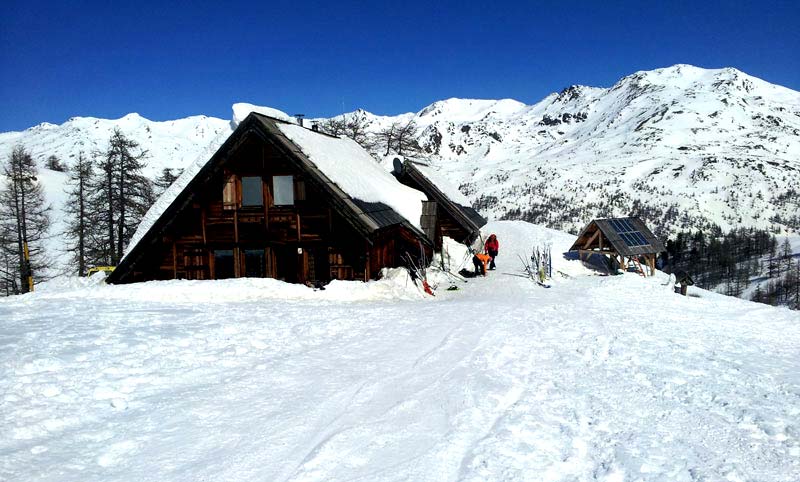 Making first tracks with a ski tour from Monetier in the Serre Chevalier valley up over the Col du Raisin then ski to the Refuge Chardonnet and down to Nevache.

The plan today was always that Elaine was going to drive round to Nevache to pick us up. The question was which route to take? The original plan was that I'd be joined by friends who know the area far better than me so I did not realy concentrate on a route.

Then, last night, friends dropped out for one reason or another and I was left 'tout seul' and thrown into making decisions as I was still going!

I decided on a route that took in some of the ascent we did last Saturday and, at the time, I noted the potential for going further over into Nevache, I even took photos so I could analyse the route along with the map.

Last year, I went over to Nevache from Le Pont de l'Alpe via Col Aiguillette and Col du Chardonnet with a mate but the descent, to be honest, was not great and, once down at the Refuge, I did look up to see how much better the descent was from the Col du Raisin.

So that was the plan; climb up from Monetier to the Crete du Vallons then travserse the vallons and climb to the Col du Raisin and go over from there.

I spent a fair while last night looking at the route on Google earth and the climb profile and descent and it all looked sensible.

Avalanche risk was 2 and climbing early would, hopefully, avoid any potential slides as the south facing slopes warm up noon onwards. My only concern was what if there was big cornice atop the Col that I could not get over, as I was pretty sure not too many had done the route judging my the lack of tracks on Saturday - and the photos I took I could not really see the neccessary detail. 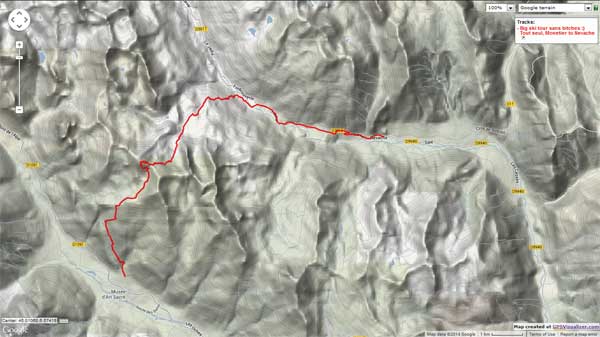 If my route was blocked so be it. I'd just have to ski down the way I'd come up, which would still be a good descent.

My aim was to be climbing by 08:30, but God had other ideas as I'd put some Compeed on some hot blister spots only for them to fall off half an hour later as they were in the cupboard from last season and were obviously old. So I had to wait for the pharmacy in Monetier to open, thankfully at 08:50 rather than 09:00 so I was on my way by 09:10 as I'd already put skins on.

As I knew the route I was able to go at quite a pace knocking off 550m in the first hour and a 1,000m in just under two hours even with stops. Amazing what you can do without the 'bitches' :)

Once closer to the final climb to the Col there was indeed a cornice and three recent slides. I put my ski crampons on and started the final ascent, I could see a track that traversed across the face to the Col but I was not happy and could see some other tracks climbing a good 100m or so steeply above the Col but this looked a safer option.

So I finally made the ridge at 2,760m and quickly changed into descent mode, only to find I had a major binding issue. Where I had problems with my bindings the other day, the shop had replaced some parts that are known to be a problem. However they must have moved the back binding around an inch. Luckily I had a screw driver otherwise I would have had to quickly learn to telemark in order to get down to the refuge.

My worry over the snow pack was unfounded as I found powder, ok  I had to traverse and get a line and then repeat that but it was way better than I had hoped.

Coming up as I was going down were around three groups all with guides - and it felt pretty cool to be skiing on your own and in the knowlede of where I had come from as many were just climbing up from the Refuge Chardonnet (pictured, above) and going back down to it.

Once at the refuge it was mobbed with snow shoers, x-country, walkers and skiers, I didn't hang around and skied the trees all the way back down to the river where I eventually found a bridge and then back along the track to Elaine and the dogs who were already in Nevache. A great tour.

Should add that I have a mapping system on my phone that shows the ski tour routes and this really helps!

The link here is the full route profile / timings and map