Snomance. Find Your Skiing or Snowboarding Other Half 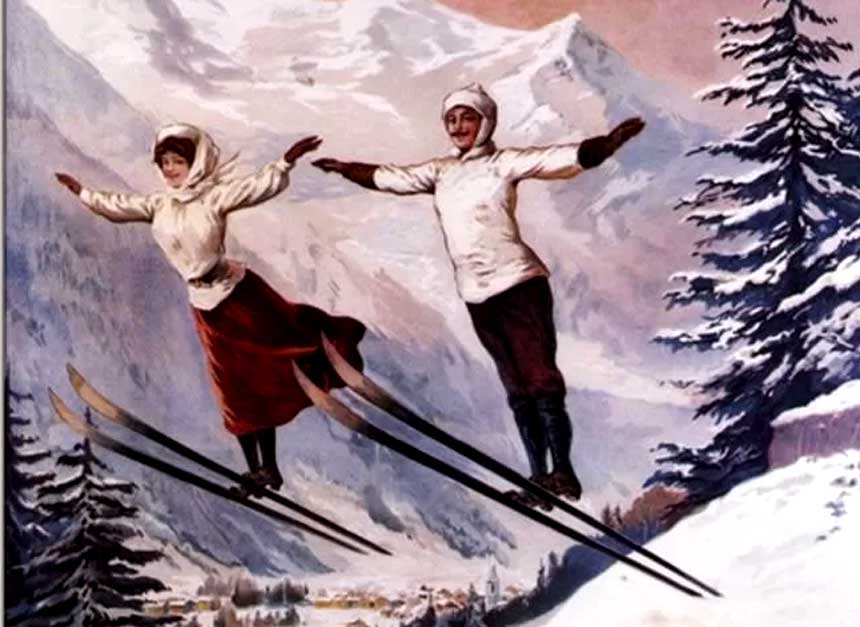 Like a pair of skis or splitboard, there's the other half out there who will complete your set up

Has your love of the mountains left your romantic life out in the cold? Are you tired of dating people who don’t understand that the nuances of boot flex or binding positions are perfectly good topics of dinner conversation? Do you long for someone who’s version of ‘pillow talk’ is talking about bossing pow pillows? If this sounds familiar don’t worry, we’re here to help. Angus Rosier, snowboarder, 28, ex-seasonaire and now living happily ever after with his OH, also a snowboarder, and with a new baby on board, shares his tips for Snomance...

Exhibit A for Alpha

The natural world is full of animals competing for a mate through elaborate displays of strength, movement and colour. Well, get a BBC film crew down to any busy snowpark in the world and David Attenborough would have a field day narrating the antics of the creatures that lurk there.

The alfa male skier puffs his already puffa-jacketed chest and waits until all around him are watching, before launching himself at great speed from the icy ramp. The female, however, is a snowboarder and has little interest in the behaviour of this lesser species. She awaits his departure from the landing zone, as she prepares to put on her own acrobatic display for a rival male.

Brightly-coloured garms and showing off sweet moves are integral to the rituals of snomance. Although, it’s important to manage expectations by ensuring that your clothing and ability match accordingly. If you are going to wear the latest, most out there snowpark style, then you’d better have the moves to back it up - nobody wants to date a poseur Or be with one of the ultimate undateables, a Jerry Of The Day. So be realistic in your stunt attempts and how you send it. Showing off in front of hot girls/guys is part of your right, no, duty, as a snowboarder or skier, but whimpering in a crumpled, bloodied yard sale heap after attempting to replicate your favourite video part will do your body, your ego, and your pulling prowess no favours.

Trust me, I’ve got the scars and humiliating memories to prove it.

If it’s just a holiday romance you’re after, then by all means go chasing the steeziest guy or girl on the hill, or use your superior skills to wow a hot learner.

But if you’re looking for a more serious snowmance then be warned that although opposites may attract, it doesn’t mean they last. I’m sure there are plenty of snow couples out there who would counter this argument, but in my experience, being at a similar ability level makes things A LOT more straightforward and enjoyable when on the slopes together. Think of it like the rating game of 1-10 for attractiveness where you should go for equal ratings rather than punch above your weight - except rate by ability instead.

My own observations (mainly from within my family), have led me to deduce that couples with vastly differing levels of confidence and skill tend to result in one feeling frequently frustrated and the other feeling constantly anxious and exhausted; cue mid-run meltdowns. 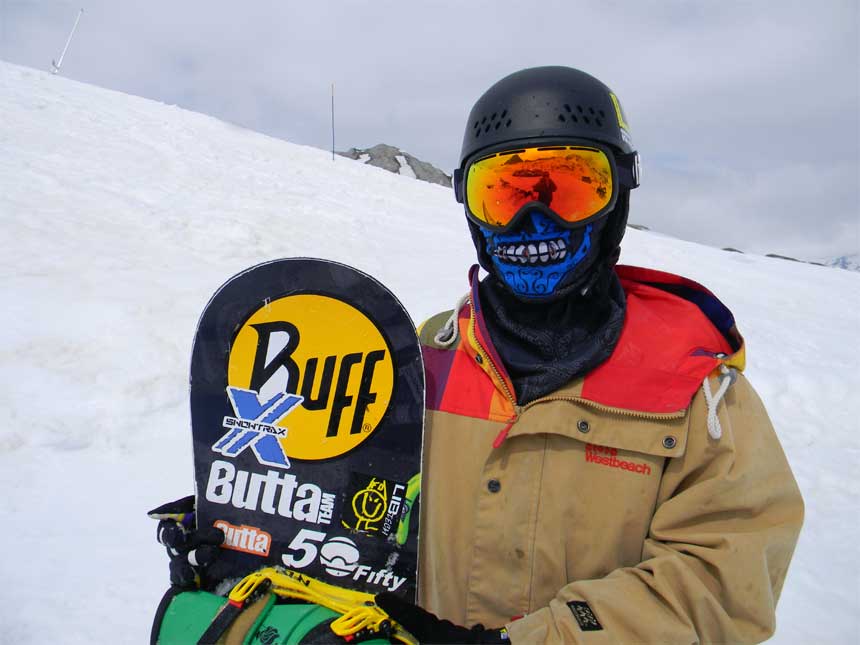 They’ve got the skills, they’ve got the style, but beneath the goggles, face mask and helmet they might look like a half eaten plate of tartiflette, so how can you tell if they’re the real deal?

Well, patience is the name of the game here, as you must keep your eyes locked on your target until they remove their fiendish disguise and reveal their face in all it’s glory, or lack thereof, as the case may unfortunately be. Prime times to sneak a peak are when they’ve stopped for lunch, are topping up the sun cream, or getting into a gondola; just try to keep it subtle, you don’t want a reputation as a snow stalker.

Baggy jackets and salopettes also present a problem, as the loose fit look essentially makes everyone appear the same shape, So you need to wait until you see your snomance target in the bars that evening before you have the full picture, although the mystery of what lies beneath may only add to their allure.

Or you could stop worrying about how they shape up under their ski suit, have a conversation and just focus on their personality. You horrible shallow person you.

On the subject of conversation, if you’re going to try to pull on a ski lift, you’re going to need some smooth openers to get the magic working. Here are a few tried and tested* chairlift chat-up lines:

'I knew this lift went high, but I didn’t realise it would take me to heaven.'

'There must be a storm rolling in… cos I’m blown away here.'

'The air seems pretty thin up here… or maybe you’ve taken my breath away.'

Lost in Your (Panda) Eyes 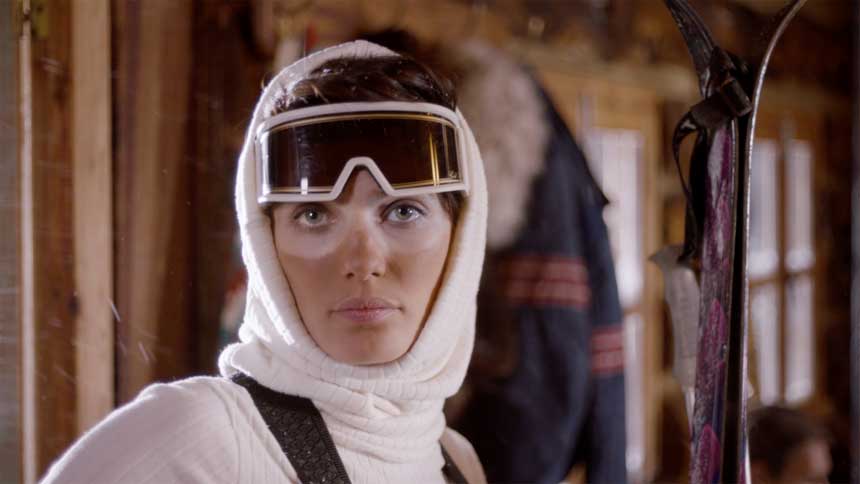 A lot of people try their best to avoid goggle tans at all costs, but if you’re looking for a snomance then a solid set of panda eyes are a sure fire way to show that you are a proper snow head.

To seasonaires these marks are such badges of honour that I’ve known some top up their tans by deliberately sunbathing with their goggles on, just to prove they are not weekend warriors. So if you want to catch the eye of a serious shredder, you’d better make sure that the region below yours is looking suitably sunkissed.

Some guys seem really impressed by girls who ‘can keep up with the lads’, but I’ve always found this pretty patronising. I mean, come on dude, you’re not exactly Xavier De Le Rue, stop acting surprised every time a girl bombs past you, it’s going to happen a lot.

While these guys may be a little misguided, they’re ultimately well-meaning, but there are still some men who really struggle with the concept of girls being better than them. Sadly I’ve seen decent female riders deliberately drop a gear because they like a guy who harbours this attitude and they don’t want to show him up. I would suggest that man-babies like this are probably best avoided for a snomance, no matter how good looking they might be.

If they’ve got that level of insecurity, chances are it’s because they’re lacking in another department. 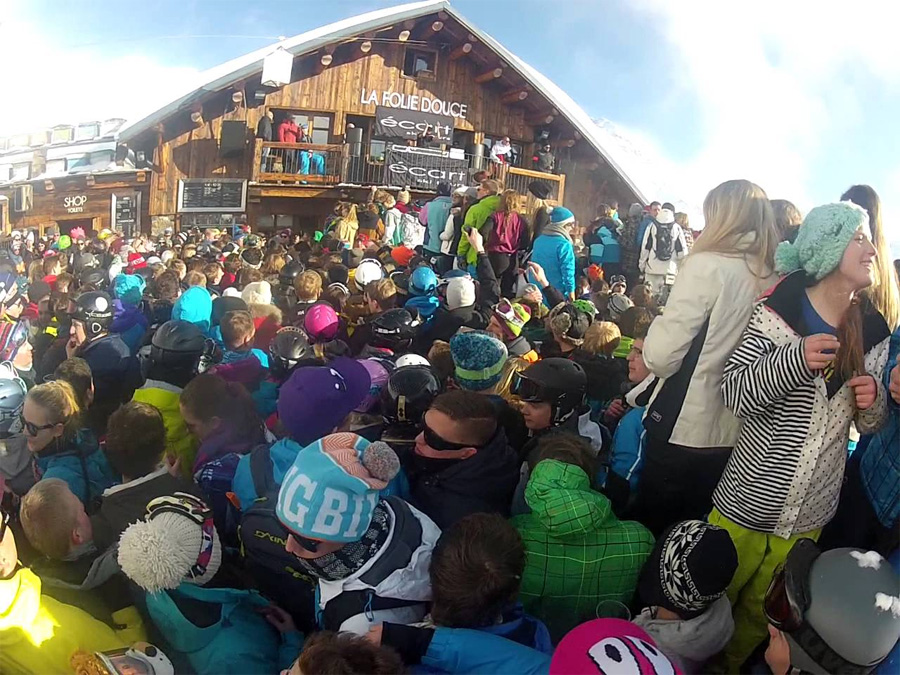 After a hard day of showing off your skills on the slopes and lines on the lifts, the apres bar is where you look to close the snomance deal. As the shots flow and the Eurodisco blares, you have to seize the opportunity to get up on the nearest table and shake what you’ve got.

Your ability to dance in ski or snowboard boots is crucial, because if you don’t join the party then some smooth talking instructor will swoop in on the object of your affection, and there’s only one way that’s going to go.

A trusty way to ramp up the apres-ski flirt intensity is with the classic, ‘I’ll show you mine if you show me yours’ line. Now, I know what you’re thinking, but I don’t quite mean that… give me some credit please. If you’re a few drinks down and all is going well, innocently suggesting that you compare recent battle scars can be a masterstroke, as a cheeky glimpse of torso or thigh can be enough to set imaginations wandering and just crank up the heat a notch.

For those of you who’d prefer to do your snow dating in the digital age, like everything, there’s an app for that. In America, dating apps like LuvByrd aim to help single, outdoorsy types find their special someone, or if you’re a UK skier or boarder looking for a getaway, The Ski Gathering lets you join other single shredders in chalets across Europe with no extra supplements just because you're not a couple. Snomance has never been so easy.

In the five years since I met my girlfriend, I’ve learned that being with a fellow snowboarder makes so much sense. I get to share this obsession with someone else who truly understands it, and we’re about to embark on a new adventure altogether, as any day now our first child is due. I don’t think either of us could have predicted that our snomance would result in this, but we’re seriously stoked about the prospect of getting our little one on the slopes and bringing through the next generation of snowboarder ...or even skier, I guess.

So, keep this guide close to you my friends, long may the wisdom imparted here serve you well. Now get your gear on, get out on that mountain, and go get lucky.