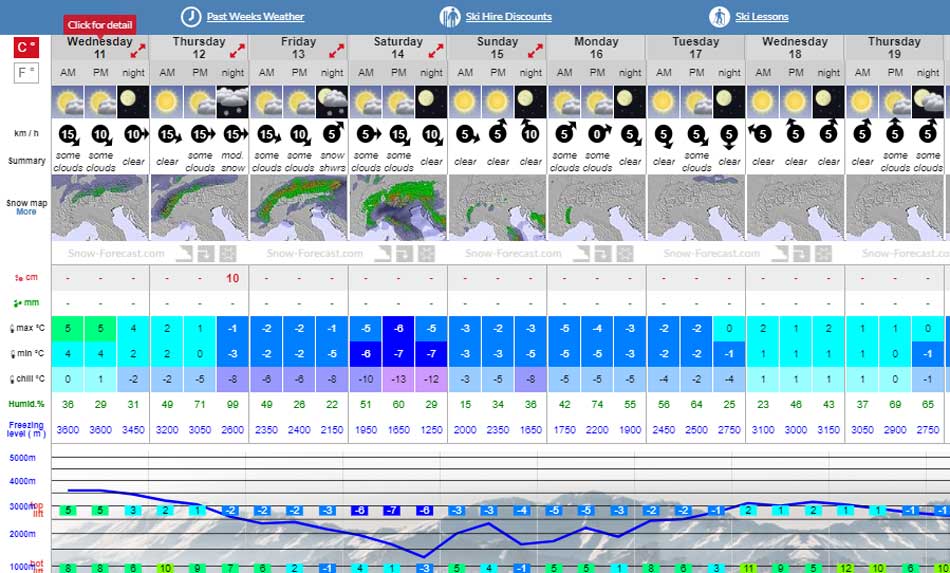 Check out the forecasts and weather patterns for a snow this winter in the Alps.

Style Altitude is known for original content, features that always have an edge. Or two. We write about all aspects of skiing and snowboarding. Visit the rest of our site for the award-winning, (almost) daily Ski Blog with ski touring and backcountry reports plus gear reviews, style views and interviews. We have a webcam overlooking the pistes of Serre Chevalier so see the weather and snow cover for yourself here at Style Altitude HQ.

So the weather this winter 2019-20 has been a polar coaster, with temperatures and the snow line up and down throughout the Alps. Last week our crew were skiing super cold blower pow and, a week later, the thermometer is in the 20s, the deckchairs are out and the hotels are uncovering their swimming pools for guests to dive in (UCPA, below, on 11th March). 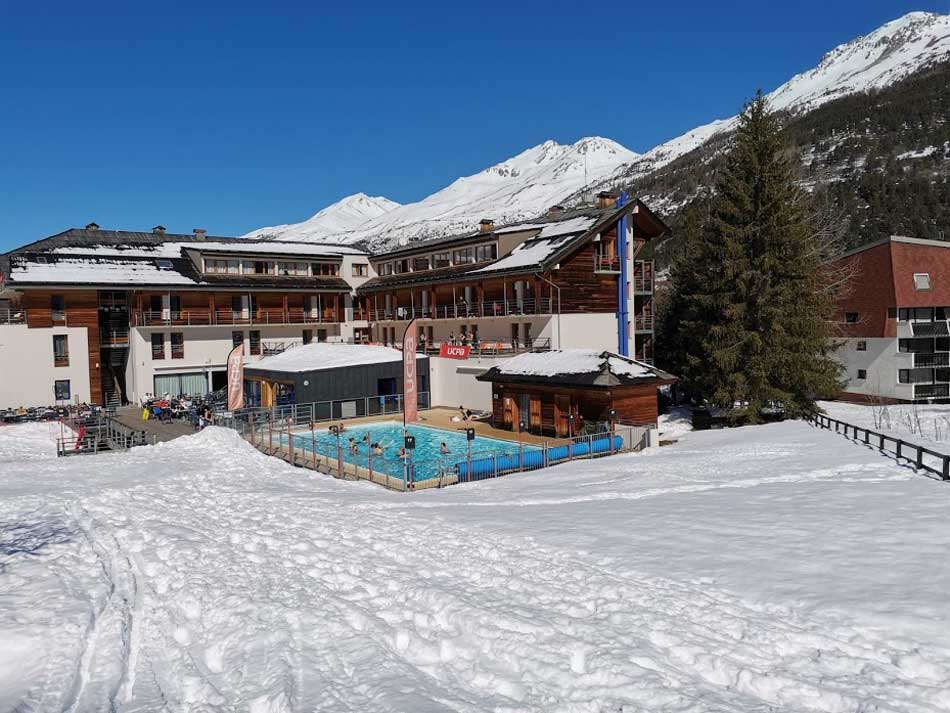 But, looking at Snow Forecast  for the nexxt 10 days in Serre Chevalier, Style Altitude HQ,  temperatures are plummeting again (main image, above). But it's not the classic freeze/thaw we want for spring ski touring. It's more a thaw/thaw followed by a freeze/freeze..

And now there's another storm coming as in coronavirus, which has already shut down the ski resorts in Italy, For many with a week booked or coming out for Easter, the fact that the resorts throughout Europe might be closed is, of course, far more crucial than worrying about snow conditions. Unless you ski tour, in which case pray for those freezing nights and warm sunny days.

February went out with a big flurry even in the Southern Alps, which had suffered a pretty dry month. And Scotland scored big time thanks to the storms that hit the UK. Flooding in England has meant snowdrifts in the Scottish highlands. Happier days, at last, for the ski resorts.

A month ago Antarctica hit the hottest temperature ever recorded. A reading of 18.3ºC was taken at the Argentinian research station on the northern tip of the continent’s peninsula nearest to South America. Meanwhile, there are warnings that the Pacific edge of the Arctic Ocean is warming up, from data gathered on water temperatures, sea ice levels and wildlife patterns from the Bering and Chukchi marine shelf between Alaska and Russia. This is resulting in early snowmelts and melting permafrost that releases greenhouse gases.

This is not good news for the planet, let alone our weather systems, which is why our temperatures are swinging like gondolas in the wind. Of course, you could burn all your ski or snowboard gear as a sacrifice to the snow gods to bless us with more snow before the end of this winter but, then, you'd  just be adding to global warming - and Lord knows what that will do to the scalding temperatures in Australia, melting snowcaps and future snowfalls.

The Japow snow machine was dialled down

February kicked off with a slippery start with a thaw/freeze causing icy conditions and Austria scoring the most snow. Even in the snow-starved Southern Alps, it could have been a lot worse and better than going all the way to Japan in January, this winter, where the Japow snow machine was dialled down until mid-February. Across the pond, Colorado was nuked by heavy snow with a metre and a half falling over 48 hours thanks to a powerful jet stream. So cheers to more of that Steamboat trademarked 'champagne powder'.

November  (Snovember) and December were superb for off piste and ski touring and a sprinkling of sparkly white stuff created Christmas card landscapes for the festive season in resort. Yep you should have been here..

Of course, this winter we did not have El Nino to give forecasters a weather heads-up for this winter. The El Nino effect of 2019 brought major snowfall in the USA, where many ski resorts remained open on Independence Day, 4th July. Mammoth Mountain in the Eastern Sierra had hoped a winter of epic snowfall would allow skiing into August but instead ended its season on 28th July. Mammoth accumulated 718 inches (1,824 centimetres) of snow at its summit and 492 inches (1,250 centimetres) at the main lodge, last winter.

But now the weather experts have declared the El Niño effect is officially over. With near-average conditions in the tropical Pacific, we returned to ENSO-neutral conditions (neither El Niño or La Niña is present). Predictions were for an ENSO-neutral (50-55 per cent chance) throughout this Northern Hemisphere winter.

Still the atmosphere is capable of wild swings

A return to neutral means that we have not had that predictable influence from El Niño or La Niña, but still the atmosphere is capable of wild swings without a push from either. Basically, ENSO-neutral means that the job of seasonal forecasters got a bit tougher.

The wild swing to high temperatures had Australia sizzling (literally with the bush fires) in record heat and meant that last summer in the USA, the pavements were melting during the hottest days on many records. One weather forecast announced that nearly 100 local records would be broken in Texas, Oklahoma, parts of the Midwest and a large swath of the East Coast during the heatwave of July 2019.

And then we wonder if climate change exists

Meanwhile, the Mexican city of Guadalajara was blasted by a summer hailstorm that dropped up to three feet of ice in some areas. Astonishing photos on 1st July from the region showed a wintry scene in the middle of summer with the city almost entirely covered with ice. Jalisco Governor, Enrique Alfaro Ramirez tweeted, 'Hail more than a metre high, and then we wonder if climate change exists'.

Climate change sceptics might quote the fact that the highest temperature ever recorded was 56.7 °C (134.1 °F) over 100 years ago on 10th July 1913 in the so-aptly named, Furnace Creek. Climate crisis advocates will counter that, according to NOAA,'s National Centres for Environmental Information, July 2019 was the hottest month ever recorded on planet earth, the average global temperature reaching 1.71 degrees Fahrenheit above the 20th century average of 60.4 degrees. While this may have been good news for ice cream sales, it was bad news for the ice caps as with these record temperatures the Arctic and Antarctic sea ice shrank to record lows (again, see first para).

Breaking news: Weather researchers are now saying the probability of El Niño is around 80 percent for the end of this year. So it could work to our advantage for snow in the Alps, next winter 2020-21. Check back and we'll let you know...