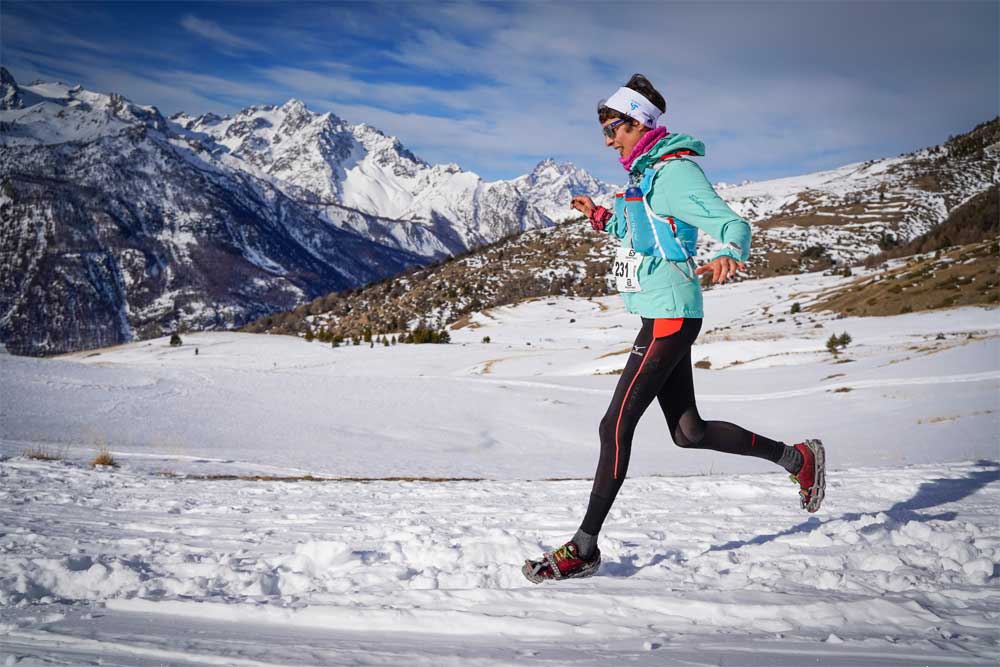 On a cold Sunday morning, 200 runners headed up the mountain, slipping on the icy trails and plunging through the snow to take part in the hard core 10k and 20k Serre Chevalier Snow Trail races

The air was fogged with breath, steaming in the cold morning air as 200 runners gathered at the Prelong centre in Serre Chevalier, ready for the start of the 10k and 20k Snow Trail races on Sunday 23rd January.

Looking around, they were a lean, keen looking bunch, not the usual fun runners, who come in all shapes and sizes. These were all seriously athletic and toned hard core trail runners, quad muscles rippling in skin tight leggings as they bounced up and down on their toes ready for the start.

At 9am we were off, watch start buttons pressed, charging into the low rising sun that made the lethal early morning patches of black ice invisible on the road. I was one of many clip, clipping along the tarmac relieved to have studded soles on my trainers for extra grip. As the road started to climb up the Chemin des Croses some runners, especially those without studs, slowed to a walk so I felt pretty good overtaking at a steady jog. Then we hit an uphill trail and even worse, rutted terrain where snow melt puddles had streamed down and turned into rivers of pure ice.

It was a sliddy ascent where I quickly learnt from the people slipping over in front how to avoid the worst patches, but able to give a hand to save the girl beside me who was doing a Bambi on ice impression in the middle of the trail. Somehow we made it to the bend in the path where we were directed to the right towards the Granon road. Our relief at leaving the slippy ice though was short lived as the snowy path ahead was liking running in marshmallow with a steep short deep snow climb to the road that had many on their knees.

Finally we were on the Granon road where the 20k runners dispersed to the right while those doing the 10k headed left and uphill. Again, thanks to training on these gradients, I found I could climb at a steady jog for the 2k on the road, while others were walking. Then passed Les Tronchets to 1920m after 6k we were directed off-piste and downhill.

Now you'd think this would be the easy bit but no. For the first kilometre downhill the snow was a mixture of hardpack and crust with no indication of which was which so you never knew if your next step would be supported by the snow or break through into leg-wrenching powder.

On the downhill paths, there was even more challenging terrain with rocks, stones and tree roots thrown in. I passed one guy in agony on the ground clutching his leg while his mate called the race stewards for help. So I took it way easier than I usually would, not wanting a twisted ankle - or worse - to bring a sudden end to my ski season. Embarrassingly, though, the leaders of the 20k caught up for the final 4k for both races, leaping past me down narrow icy and rocky gullies while I was sliding down on my butt.

I should have known from doing the 10k in 2020, that the distance was a rough estimate rather than an exact science. My Garmin had 11.57k by the time I came through the finish so, yep, nearly an extra mile. But I was pretty happy to have taken part among such an elite looking pack in a not too shabby 1hr 57min, the 35th female and 2nd in my age group.

And I was feeling pretty good until I went skiing the same afternoon with my daughter, Loulou who had just arrived from the UK. So, meh, now having trouble walking let alone skiing or running!