Snowboarder Learning How To Ski: Days 3 to 5 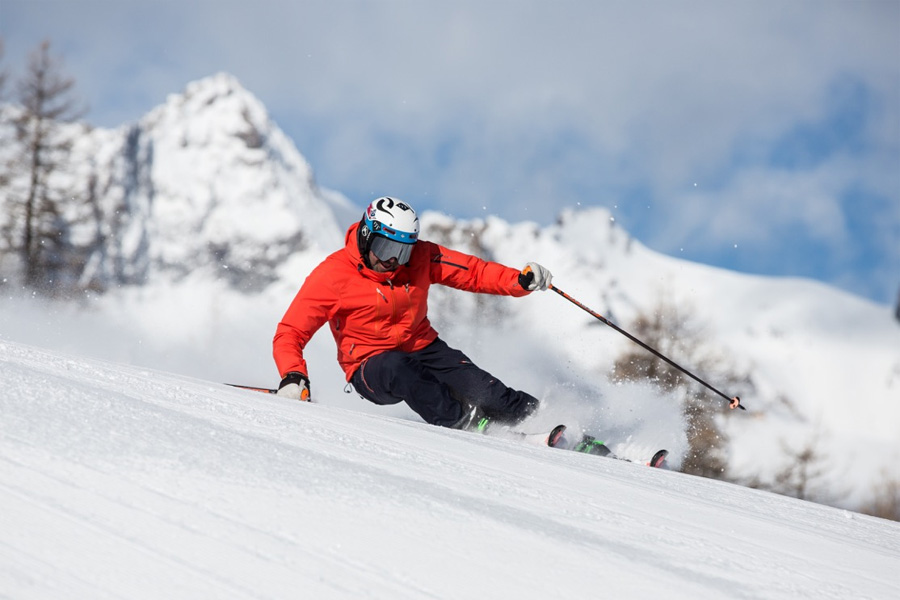 Ups and Downs of Transitioning From Snowboarding To Skiing

Our backcountry snowboarder is on a mission to learn to ski in 5 days and carve just like Darren Turner. But lessons came to a halt after Day 3. So was that the end of Project Learn To Ski?

After the progress and success of Day Two, I wasn't really contemplating another revelation in terms of technique on Day Three of Project Learn to Ski. As usual, Darren (Turner, image above) proved my doubts to be wrong.

Today's lesson was an extra hour long, three hours in total. While we headed up the lifts to find better snow, I explained that the night before I had been thinking about the evenness and control of edge pressure through the turns and how I could improve it. I know this sounds techy for a novice skier to say after just two days of lessons, but at times on Day Two, I was having trouble controlling speed and thought this to be the cause.

Darren asked me about my occasional glances uphill, especially when finishing turns. I'd already learnt the day before he's got eyes in the back of his head as he'd noted mistakes I made while I was skiing behind him. He explained that sneaky glances were all he needed. However, with my mirrored goggle lenses, how on earth was he able to see where I was looking. Of course, my head and shoulders were giving the game away.

I explained that this upwards glance was helping me put pressure on the downhill ski and slow the speed in the turn. Needless to say, Darren had already identified this issue from Day Two and knew how we would work on improving my body positioning to ensure I stayed centred over the skis. As the lesson wore on, I began to understand the benefit of the improved position and greater ease with which the pressure could be controlled and maintained on the edges without me having to look up the slope.

The outcome of all of this was that my upper body and head were now looking downwards as opposed to across the slope. This enhanced position improved my body's angulation and being more centred over the skis it was much easier to achieve greater edge and pressure control.

It hadn't escaped my notice that half way into the lesson, we were now skiing steeper runs.

If you'd have asked me on Sunday morning whether I would be skiing red runs by Tuesday lunchtime, the answer would have been an emphatic 'no'.  Well, that's how the lesson ended with a couple of red runs thrown in and no panic or fear on my part.

All in, another very satisfying day's progress on skis.

A break for lunch and only a short apres lunch practice was enough for me to call it a day. Despite the urge to carry on and practise, practise, practise. I wanted to keep everything fresh in my mind as well as my legs.

Day Four was a disaster, Around midnight on Day Three, I awoke with the onset of gout in my ankle. This is an occasional issue for me, but has a trend to happen while on holiday. Day Four was spent taking medication and icing my ankle so by the evening, the worst was over and my hopes were high to get back out on the slopes on Thursday.

Darren's diary was fully booked for Thursday so I was on my own with just the three days of lessons to help me get round the mountain.

>So, it was a day spent covering the terrain trying to remember the lessons and avoid developing bad habits.

I tried to mix up the runs and alternate between concentrating on repeating the exercises Darren had instructed on one run and then on the next, relax more and look at skiing the slope.

Overall, I cannot have been happier with the days skiing, OK I didn't ski any black runs but nothing I skied phased me or saw me standing at the top of a slope in a panic. Darren has given me the tools to get safely around the mountain.

I need to be realistic, after 30 plus years on a snowboard, I still have a lot to learn and practise on skis!

With one day left, despite the missed day through illness and subsequent loss of a day's tuition, I can only be pleased with progress so far on Project Learn to Ski.

Tomorrows plan is to ski with my kind and hospitable hosts, Elaine and Gavin.