Die Hard Snowboarder Learning How To Ski in 5 Days 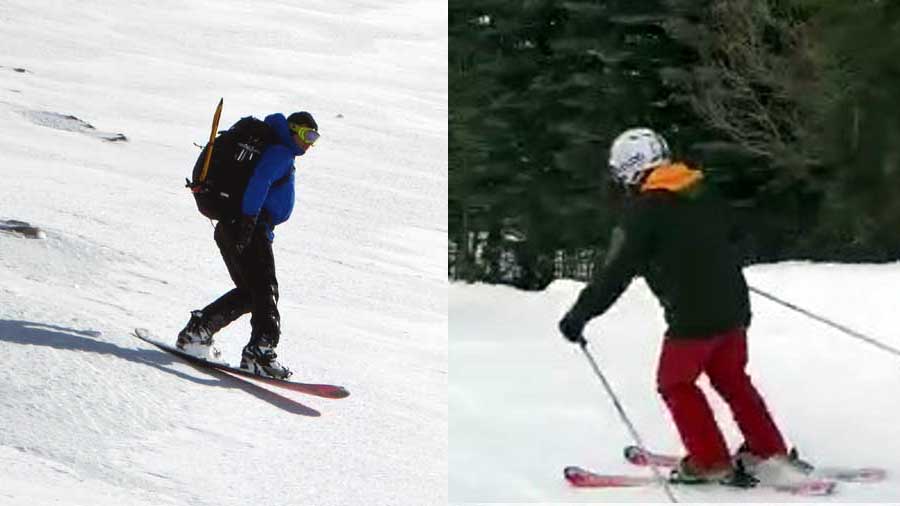 When a backcountry snowboarder for over 30 years decides to swap one plank for two, how hard can it be? Check out how our sideways rider is on a steep learning curve and finding his way in a ski resort...

So Why Learn to Ski?

I'm 'fifty ten' this year and I've decided it's time to try something new before I get another year older. Having a go on skis has been in the back of my mind for a while

So having not skied since the late 80's when I ditched two planks for one, it was time to give skiing go. Though having said that most of my snowboarding, backcountry riding and touring, is now on a split-snowboard.

I should add I spent about five minutes on skis on a 'dads and sons' weekend trip to Three Valleys about three seasons ago. That experiment ended after a couple of hundred metres on a green run with an out of control snowplough into a snow drift, a sprint back to the chalet and the comfort of strapping on a snowboard for the rest of that trip.

Planning a return to the sport couldn't have been easier thanks to my friends at Style Altitude. A couple of emails to Gavin and a phone call later I had a series of daily one-to-one lessons booked with Darren Turner of insightski.com and the date scheduled for January.

In fact, probably the hardest part was getting on the plane at Gatwick without a snowboard in my hold luggage. It just didn't feel right!! But, if I was going to do this for a week, I was going to do it 100 percent.

Day One: The Snow Plough Revelation

Two hours were booked for 9:00 am Sunday morning. Quick introductions and off up the nursery slope.

Darren has a great ability to break all of the instructions down into easily understood bite size snippets, which really helped. He didn't suffocate my thinking with complex explanations and clearly articulated what we were going to be doing step by step.

For me the big learning point of the morning session was how to initiate the snowplough. Previously in the Three Valleys after my failed sortie out of control into a snow drift, I had concluded that skiers must have leg muscles like race horses to be able to make the 'V' shape with the skis and hold them on the edges so as to make a snowplough turn on skis.

This time around, the simple instruction of pushing the tail out of the uphill ski away was a breakthrough, so simple it was a revelation!

With the two hours over, I was happily doing laps on the green run we'd practised on earlier with a contented smile. While I'm sure the skis were still waggling around underfoot, it didn't feel like one of them was just about snap out of control and take me with it!

Incredibly, common sense took over after a couple of hours of practise and I took the lift back down instead of the winding narrow path. I hadn't really been anywhere near skis for many years, but my head and to an extent my legs were telling me to call it a day and spend time thinking about what I had learnt.

Not long after getting back to the bottom of the mountain, I met up with Elaine and Gavin, had lunch and helped prepare a magnificent supper (I peeled the potatoes).

That evening, I found time to re-watch some of Darren's ski tuition videos. These are generally two or three minutes long and focus on a single aspect within a skiing manoeuvre, in my case snowplough turns. Being so specific and a couple of minutes long they make the information really easy to understand and absorb.

Day Two: Going With The Flow

Same routine as yesterday to start with, a quick assimilation of where I had got to after yesterday's post lesson practise on the nursery slope and it was off up to the higher slopes.

Today, Darren had me doing exercises to roll the edges of the skis both upwards and downwards while traversing a slope. This was to be today's revelation, an exercise I repeated many times later on after the lesson ended.

It really did feel like my skiing was flowing, albeit with the limitations of speed and gradient, but definitely the sensation of flowing from one turn to the next.

Even better we'd progressed from green runs to blues. Darren's tuition meant that I was starting and finishing the turns under control (well most of them!). This was a great boost of confidence, if those are the right words. Knowing I had learnt the correct techniques to safely change direction really helped me get around the mountain. All I had to do was remember the basic drills and put them into practise.

As with yesterday, the lesson quickly whizzed by and when Darren headed off leaving me to practise, he carefully gave me directions on how to get back down to where we had started.

After an hour, I headed back down, I took a couple of wrong turns and by the time I was due to meet up with Gavin at the bottom for a snack and afternoon ski together, I was, quite literally still at the top of the mountain.

A quick phone call and a new plan to have some lunch in a nearby restaurant where Gavin would come and find me worked a treat. Plus, I now had someone who knew the way back down. Thank you Gavin.

As with yesterday, I tried to keep to speeds on the slopes to stay in control and able to practise the exercises that Darren had worked on with me. Terrain, which would have terrified me on skis yesterday, whizzed by.

In two days, I really feel like I have come a long way and if you'd have asked me yesterday would I be getting around so comfortably as today (navigation error excepted), I would have said I would still be on the nursery slopes!

All in all, another fantastic day experiencing and enjoying such a steep learning curve I'd never imagined possible!.