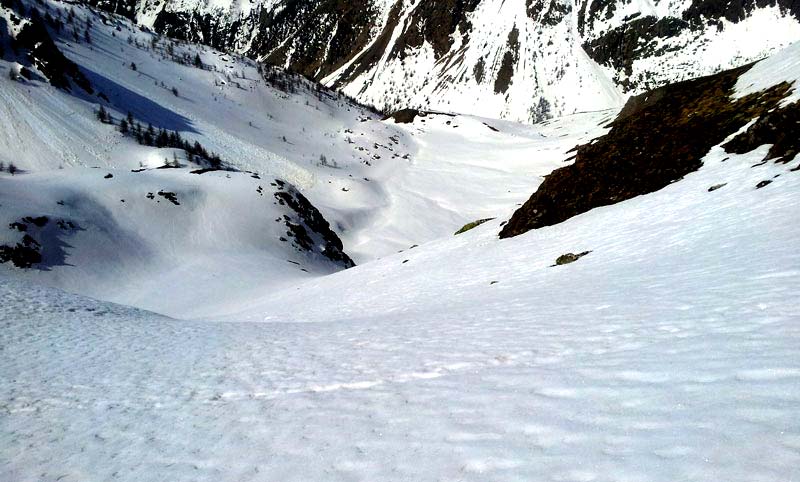 GRAB THE SKINS, TOURING SKIS OR SPLIT BOARD AND HEAD FOR THE QUIETER HILLS. GOING SLACKCOUNTRY OFF THE LIFTS OR BACKCOUNTRY WHERE THE ONLY LIFT IS THE ONE ON YOUR TECH BINDING, OUR CREW EMBARK ON CLASSIC AND NEW ROUTES, REPORT ON CONDITIONS, CAPTURE THE VIEWS AND MAKE FIRST TRACKS.

Make a plan make God laugh. Sometimes you have to adapt slackcountry tour plans according to which lifts are actually open.

I did think yesterday that as we have lift passes why not use the lifts to gain height quickly (so we don't have to start too early) and then go off the back and skin back up to a lift?

We did this a while back when going off the back of the Eychauda and then skiing down to Les Combes and skinning back up to the Rocher Blanc chair - but we know that is shut now.

So sat down last night looking at various options, and settled on one which would see us taking the Mea drag lift and then go off the back of the Col du Mea and then picking up the ski tour route which goes over the Col de Frejus and on to the Cucumelle chair.

I double checked the idea with a ski instructor last night who shrugged his shoulders and said why not (did not give me great confidence) but then this morning as we were leaving I bumped into my neighbour Jean Claude, who is a guide of more mature years, and showed him my plan - and again got another positive shrug!

Now, as we often say, make a plan make God laugh - and sure enough the drag we wanted was not working.

So we headed off to the Eychauda drag and took the ridge to the right which gives access to the same bowl. Have to admit to being quite nervous (God knows how Elaine felt) but I did see some tracks far below. So opted for the descent telling Elaine we could always skin back up as there were various safe route options if we ended up with our route blocked by cliffs etc

And hallelujah what a descent, totally untracked spring snow at it's sugary finest.

Route finding then became rather critical but somehow managed to pull it off and towards the end had to take skis off to clamber down some rocks that were devoid of snow. We then traversed along the valley before running out of gradient so time to put the skins on.

We started the climb pretty well spot on the touring route at 1,800m. My concern was the ascent as we were climbing rather late in the morning - and the final climb to the Col was on a south facing slope. In a bizarre way. it was good to see that there had been a lot of warm weather slides and nothing looked too loaded above us, though I did not venture into many steep bowls opting for an even steeper route on spines and ridges where possible that looked to be a safer option.

Half way up, though, we heard the distinct roar of an avalanche, cascading down the opposite valley on north facing slope from high altitude.

The final climb to the Col was, thankfully, quite easy and safe, and I don't know why but it was only 600m vertical but Elaine and I were both feeling pretty cream crackered.  It was quite a relief to see the Cucumelle chair - plus had always wondered what happened if you went beyond that chair? Now we know!

As for wild life , we saw three marmots playing in the snow, running around and a few chamois sprinting out below us, so not a bad tally!

Once back in resort at the top of Cucumelle chair knew it was warm as there were puddles up there, and the ski down was in the slusheist of snow yet this season, much harder work than a couple of days ago and, naturally there were not too many people out,  This was around 14:30.

Route was also good as we could work out some other options that Jean Claude had told me about coming off the Yret chair and then skinning back up the same route, but only half the distance :)