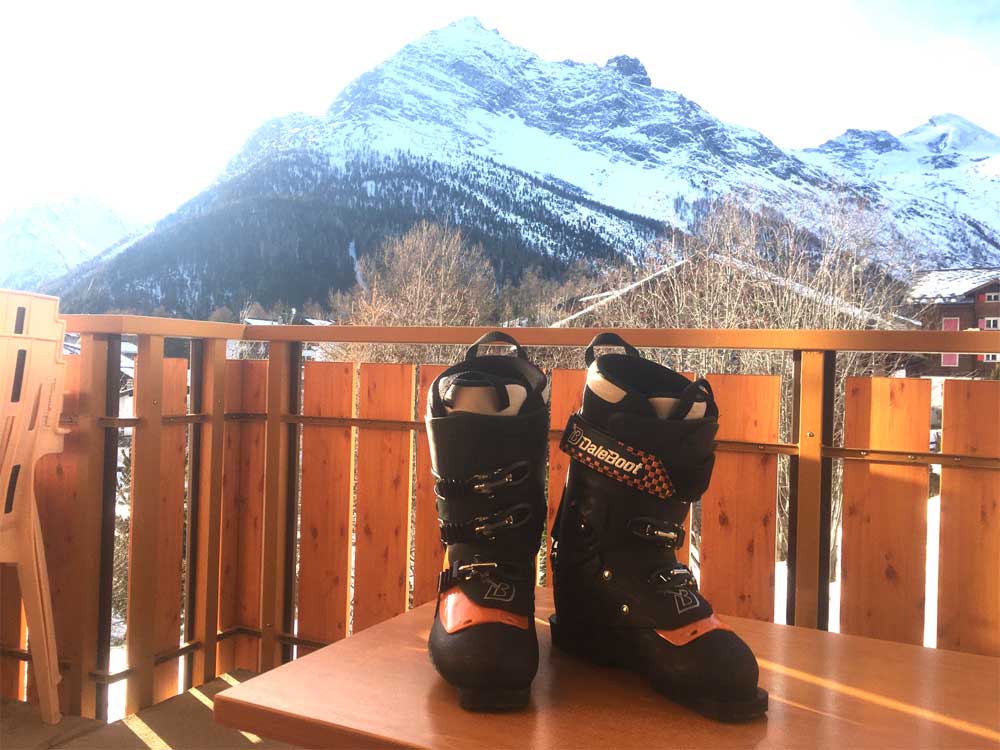 Are custom made Dale Boots the Christian Louboutins (or Loubootins) for skiers?

Having suffered for years, Chris Tomlinson has discovered the Holy Grail of ski kit, comfortable ski boots turning him into Dale Man...

Until now, a day’s skiing would always start with a visit to the ‘hurt locker’ to put my ski boots on. I had come to accept that my feet must suffer, so the rest of my body could enjoy the slopes. By the end of a season my feet would be so bitter and twisted, it would take most of the following summer to gain their forgiveness.

My first visit to the hurt locker, was a particularly gruesome experience. Naively, I borrowed a friend’s boots for my first skiing holiday - an act of self-mutilation for which my feet still seek justice. I might as well have borrowed my friend’s false teeth; they couldn’t have fitted any worse than her boots. They made the almost impossible task of learning to ski, actually impossible. Everyone kept telling me all ski boots hurt, but they weren’t trying to eat a rare steak with somebody else’s teeth. Since then, I’ve owned many pairs of ski boots, none of which I would have described as 'comfortable'

You can’t ski in a pair of slippers

Boot fitters have ways of talking you into buying uncomfortable boots: ‘They won’t hurt when you are actually skiing,’ ‘they will slacken up’, ‘they just need breaking in’, are some of their favourite phrases. They use the promise of better performance to justify the lack of comfort. ‘You can’t ski in a pair of slippers’ – I remember the last guy saying.

Once I’d parted with my cash, I’d set about ‘breaking in’ my new boots, knowing that it was my new boots that would really be breaking in my feet. After a couple of weeks' skiing, I knew that my feet would acquiesce and visiting the hurt locker would become less painful.

If my boots became too comfy, I’d start again with a new pair

Unfortunately, I had accepted the wisdom that when your ski boots become 'comfortable', it was time to buy a new pair because they had lost the stiffness and flex needed for accurate ski control. I used to believed that ‘comfy boots were bad boots’, or at least bad for skiing performance. So if my boots became too comfy, I’d start again with a new pair.

The other common wisdom, I had accepted, was that you need to find a boot manufacturer, who thinks your feet are normal. Each have their own moulds designed to fit what they believe, is a 'normal' foot. First I thought I was an ‘Atomic man’, then a ‘Head Man’ and latterly, I became a ‘Lange man’.

The truth is, nobody has a normal pair of feet. Everyone has one foot slightly larger than the other yet ski boots, like all shoes, come in matching pairs. So one ski boot is always going to hurt more than the other. If you buy a pair that fits your bigger foot, your smaller foot will rub and blister. If you buy boots for your smaller foot, your larger foot will suffer crush injuries. Deciding which way to go makes for a delicious choice if you’re a masochist.

After my accident (now, well documented in Skiing With Demons III) my boot problems got worse. My right foot now has limited dorsiflexion making it difficult to insert into a ski boot. I’ve noticed that just the anticipation of a visit to the hurt locker, sends it into spasm.

Then, one night after Christmas, I saw a light in the southern sky. This star seemed to shine over Abingdon, so I followed it and found the boot fitting messiah – he was called Richard and he worked at Dale Boots.

He understood my feet. He communicated to then in the language of feet; my sores, bunions, collapsing arches and mis-shaped toe nails spoke to him. After a measuring session, I returned a couple of weeks later to find a very special pair of boots waiting for me.

Like my feet, one boot was bigger than the other. The right one was wider than the left one too and both had tailored heel-plated to individually correct my leg alignment. Both had custom made heal wedges (inserted under the footbeds) to give further support to the arch and heel. After mouldered liners and footbeds where inserted I tried the boots on feeling like Cinderella.

The boots were worryingly comfortable

My left foot slid into its boot without complaint and no lengthy negotiations were need to persuade my right foot to do the same. I stood up and did what we all do when we try on new shoes – prance around trying to imitate various modes of perambulation.

The boots were worryingly comfortable. Was I about to ski a season in slippers? Richard assured me they were high performance boots. ‘They might even improve your skiing’, he postulated.

I need not have worried. Two weeks of skiing later, I can confirm my ability to control a pair of skis has neither improved nor deteriorated since becoming a ‘Dale Man’ – other than what can be attributed to the ravages of age.

My feet no longer hate me

I have noticed that I no longer prefer to turn right. My left and right carve turns are now equally effective. The boots have adjusted for my skeletal asymmetry and I can apply equal pressure to both of my inside edges. The other big improvement that I have noticed is that my feet no longer hate me.

My encounter with Richard, may have made me significantly poorer but thanks to him, I shall never have to visit the hurt locker again.

If you and your feet have been affected by any of the issues raised and wish to seek alternative help read How Best to Solve Ski Boot Pain and Boot Problems and How To Prevent And/Or Treat A Ski Boot Blister.