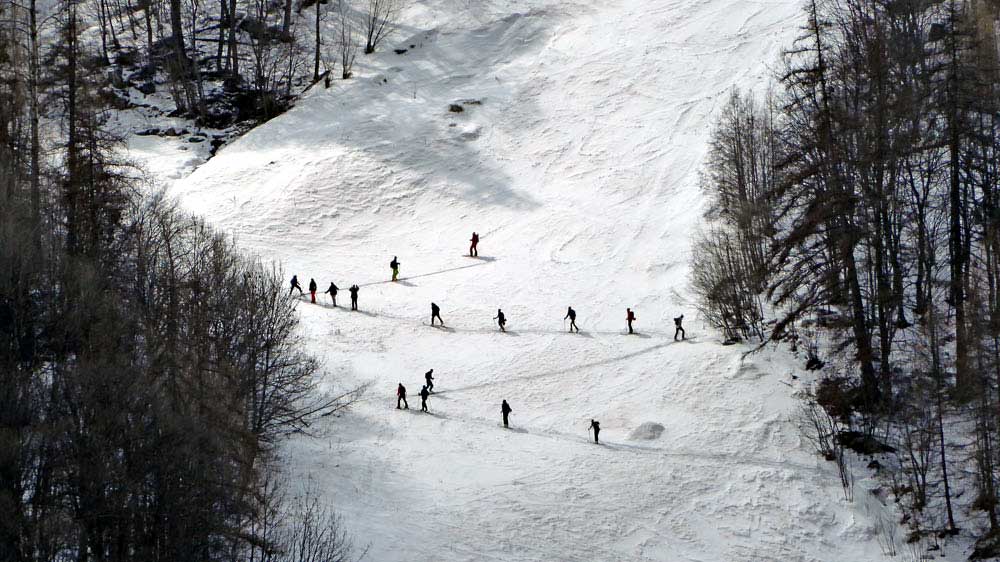 The Covid crisis has been a huge catalyst in the increase of ski tourers, which has been predicted for the last five years but who knew uphill skiing would happen so fast? However what - or who - goes up must come down, some more proficiently than others...

The only lifts currently working in the French Alps are those on the back of ski tour bindings to go uphill.  So it's no surprise that as we hit the start of spring - and spring weather - the hills are alive with the sound of skins brushing against the snowpack and the chink of crampons in the icy mornings.

Now it would be churlish to complain about the numbers of newbie tourers on our patch in Serre Chevalier especially as there are boundless acres of untracked snow above 2000m, the height where many turn around. In fact, the novice tourers are mostly a hazard to themselves, not only going up but potentially more so when it comes to descending.

You've got to question the wisdom of those who head uphill on rented kit with no prior knowledge of ski touring. Take a guide? Why when you can go up and follow what would normally be a piste? Yesterday, we watched a group of 16 tourers zigzagging up, (image above) and they did at least have a guide and looked like they were farily decent at kickturning on a fairly steep gradient. They were even socially distanced.

A couple of days ago, though, we were skiing down the mountain at around 1pm and met a raggle taggle group on skis and snowshoes at around 1600m on their way up. We stopped to wait for the Rando Chiens who were haring after us and chatted to a 20-something guy in the front. We had our first uh-oh moment when he said he was from Paris, which made us back off a tad, it being only two days before the city was put into strict lockdown. The second was when he asked if there were green or blue runs in the direction they were heading. Normally, the answer would be 'oui' but, of course, there's minimal piste grooming going on so blues were more like gnarly blacks with chopped up snow and, if you're lucky, a piste basher wide strip of icy corduroy.

He then announced it was his first time on skis!

Talk about a heli ride to hospital waiting to happen. And, then, if he came from Paris and had Covid, there would be a superspread of infection. Hopefully, they didn't go much further and he took his skis off and walked down.

How often though do we see groups of ski tourers in the Lautaret area on a Sunday outing, enjoying a picnic after a climb of around 700m - and then skiing down like a bunch of muppets? Ski touring is, indeed, a great way to enjoy the mountain scenery, fresh air and freedom but how about getting down? People, it's the backcountry with no guarantee of good snow let alone any grooming.

But then I guess that's how you learn to ski all conditions.